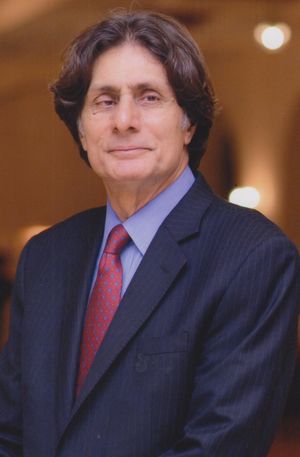 Raoof Hasan has for long been a fierce proponent of better relations between India and Pakistan. He was recently appointed special assistant to Prime Minister Imran Khan. Hasan, who also heads the Regional Peace Institute in Islamabad, spoke to THE WEEK on the way ahead for both the countries. Excerpts from the exclusive interview:

Q/How would you define the dip in hostilities between India and Pakistan?

A/It is a possible thaw. The DGMOs (director-general of military operations) met, and there was a ceasefire along the Line of Control. We kept hearing of back-channel contacts. Whoever did it, it is a good thing. We are looking to move forward further.

Q/When you say moving forward, what are the steps that can happen?

A/If the two countries want to maintain regular contact, then you need senior people to be stationed in both the countries. They can be the high commissioners. I feel that is going to be one of the initial steps.

Q/We have been here before. Do you see these steps leading to a fruitful engagement this time?

A/When Imran Khan was elected prime minister, he addressed a press conference reiterating his commitment to peace with India. He said, ‘If [Prime Minister Narendra] Modi takes one step, I will take two.’

In the two and a half years since, he has reiterated that. His commitment to having peace with India has not floundered. But developments took place, and since he is a political leader, he has to be sensitive to developments at home.

I think both countries have now realised that it is time to move on, without forgetting what has happened. In the letter Imran Khan recently wrote to Modi, he again reiterated the need to address the problem of Jammu and Kashmir. Modi meanwhile said we should have a relationship minus terror. You have reiterated your position; we have reiterated ours. One has to work within these constraints. Progress may be slow, but there will be progress.

Q/Do you think it is possible for India and Pakistan to move forward so far, for the DGMOs to have issued a joint statement, without a deal being brokered?

A/Pakistan’s position has been very transparent on that. We have always urged friendly countries to intervene so that India and Pakistan could have peace. On the other hand, the Indian position has been contrary to ours. The Indian government has always said it is strictly a bilateral issue and that it will not allow any foreign intervention.

Q/Do you think this can happen without help?

A/I feel that some friendly countries, or a friendly country, has nudged it along. The nudging makes all the difference. Maybe Pakistan sought some assurances; maybe India did.

Q/Do you think the next steps will be confidence-building measures? That the two countries will agree on low-hanging fruits first?

A/When it comes to India and Pakistan, there is virtually no low-hanging fruit. We only have serious issues. You have terror; we have Kashmir. Then, of course, there is Siachen. I don’t know how much we can work around terror and Kashmir. We will have to find a mechanism.

I would like to go back to the time of president Musharraf and prime minister Vajpayee. You remember the five-six years of back-channel diplomacy? We came tantalisingly close to signing a deal on Kashmir. Maybe that is a document you refer to and we can begin where we ended. A lot of background work has been done on how to move ahead on Kashmir, which was not seen as a victory for either India or Pakistan. We have enough material on the table, if there is willingness on the part of India and Pakistan. I can speak for my country: we are totally devoted to peace this time.

A very important moment of transition [is here], marked by the holding of the Islamabad Security Dialogue. Pakistan wants to go from being a geo-strategic country to a geo-economic one. It is an important moment. Indians can be assured that the desire for peace is more than ever before.

Q/Do you think things will be different from last time, when Modi made a grand gesture visiting Nawaz Sharif?

This time, I think, it is a well thought out strategy when it comes to Pakistan. Our commitment to peace has increased with the passage of time. I think we are willing to invest solid, sustainable effort in the cause of peace with India. As I am given to understand, if there was no reciprocity from the Indian side, we would have not come as far as we have.

This provides a good beginning. What is important is that the two countries should be able to build on it. It is absolutely vital. Restarting after a break is a difficult thing. But going slow is maybe a much better option. I think it is going to be a slow process this time. But it is going to be a solid and sustainable process.

Q/What about terror? How do you see India’s demand on it?

A/There has been no terrorist activity even inside Pakistan. The entire country has suffered enormously because of terror. We are the only country that has fought the battle successfully. We have overcome it inside Pakistan, and we are committed that terror will not be used as an instrument.

It will be a more formidable challenge for India to shape its narrative on Kashmir. Obviously, that is going to be on the table. Negotiations with India and Pakistan cannot be without Kashmir being on the table from our side. From your side, you can put terror.

We will be quite open to discussing terror, but similarly India will have to be open to discussing Kashmir. These are solid challenges that India and Pakistan face. It won’t be possible to go around these issues for too long. At some point, we will have to address them. How the two countries do it depends on the sagacity and wisdom of the two leaderships.