Britain's greatness may well be a thing of the past 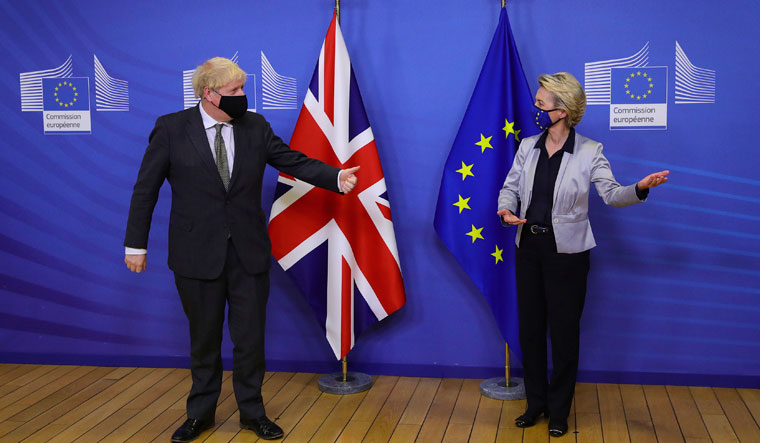 This year has been like no other in our lifetimes, except for one issue—Brexit. Yes, Britain left the European Union last January, but the status quo continues to enable a negotiated post-Brexit free trade deal.

And that was when the fight started… again.

It was déjà vu. With a December 31 deadline, the 2020 trade talks mirrored last year’s UK-EU tensions when they negotiated the exit deal—accusations, threats, showdowns, deadlock and even the annoying exclamations from yesteryear. “All options are on the table, deal no deal, hard or soft deal, delay, no delay”. Have they not been there, done that? Apparently not. “Nothing is agreed, until everything is agreed,” said European Commission President Ursula von der Leyen.

At “the eleventh hour”, because they could not “see eye to eye”, the two sides made a “last-ditch” attempt to meet “face to face” to negotiate a “make or break” deal. Covid-overwhelmed Britons seemed past caring and journalists ran out of clichés. “The Brexit frog has been truly boiled, but we’re too exhausted to notice,” said former Tory finance minister George Osborne.

The “cliff-edge” brinkmanship was preceded by one referendum, two national elections, three prime ministers and four and a half exhausting years of transcontinental haggling. The row: Britain insisted on sovereignty over its fishing waters, where the Europeans have trawled for decades. Fish is only 0.1 per cent of the British economy, but ceding sovereignty over fish and laws is betraying Brexit—which ordained “Take Back Control”.

In turn, the EU insisted Britain comply with its “fair competition” laws regarding subsidies, labour and environmental rules to get “no quota, no tariffs” access to its single market of 450 million people. And establish a dispute resolution mechanism. “We must obey their rules!” sneered Pro-Brexiteer fisherman Tom Watson. “The European Union is Soviet Union with money.”

Stranded at sea: European trawlers in the North Sea. French fishermen say their livelihoods will be affected if Brexit restricts their access to old fishing grounds | REUTERS

Even with a free trade deal, there will be checks and inspections at British borders, causing bottlenecks, delays and traffic snarls when the transition period ends. But a no-trade deal is catastrophic, despite British Prime Minister Boris Johnson’s spin-doctoring, “It’s a wonderful solution to trade with the EU on Australia-style trade terms”. A voice of doom cautioned from Down Under. Former Australian Prime Minister Malcolm Turnbull warned Johnson: “Be careful what you wish for. It’s not what you want, frankly.” Australian style is a euphemism for a WTO deal, involving customs procedures, barriers, inspections, paperwork, quotas and tariffs. British exports and imports become costlier, making them harder to sell; queues and shortages inevitable.

But there is no shortage of bravado. When Brexit takes effect, “Global Britain” breaks free from the EU and becomes an independent nation. Britain saves annual EU membership fees, strikes its own trade deals with Japan, India and the US, and controls its laws and borders. “Britain will be stronger, more prosperous and secure outside the EU,” said Brexiteer Home Minister Priti Patel. “With greater fiscal flexibility and regulatory reform, we will transform our country into a dynamic engine of prosperity, job creation and growth.”

In the near future, Brexit will cut growth, jobs and prosperity. Government “worst-case scenarios” warn supply disruptions, and inflation can cause civil disorder. Foreign companies that had set up headquarters in London to access the EU market are shifting to the continent, aggravating the economic slump. Britain must pay a £33 billion divorce bill to the EU, cannot obtain high technologies or bid for their public contracts. 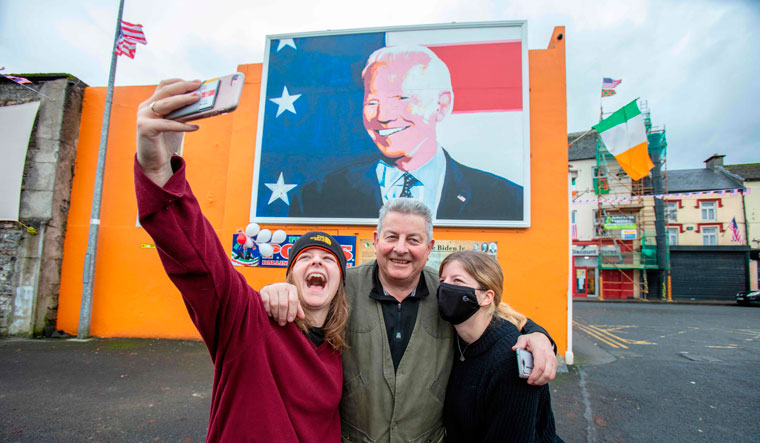 Widening gulf: People take a selfie opposite a poster of joe biden in the us president-elect’s ancestral hometown of Ballina in Ireland. Biden views Brexit as a ‘historical error’ | AFP

“With our educated workforce, our language as the international language of commerce, we are ideally geographically located to prepare for success,” predicts Patel. But geographically, Britain is somewhat conjoined at Europe’s hip. Half of its £1 trillion trade is with the EU. “Brexit is bad for the EU, but the pain is shared by 27 countries. It’s terrible for Britain. It is self-harm,” said European Parliament member Philippe Lamberts.

For Britain, a trade deal with the US is vital. But Johnson first has to do damage control with the Joe Biden administration. The Democrats were displeased by Johnson’s reference to Barack Obama’s “part Kenyan heritage”. Biden described Johnson as a “physical and emotional clone of Donald Trump’’.

In no hurry to do trade deals, president-elect Biden focuses on American workers and education, saying “We’re going to fight like hell by investing in America first.” He reaffirms Obama’s position that Britain must go to the back of the queue for a trade deal. Unlike Trump who despised the bloc, Biden views the EU as a like-minded partner and sees Brexit as a “historical error”. Proud of his Irish ancestry, Biden is the most Irish President since JFK 50 years ago and says he will not tolerate the Good Friday Agreement (brokered by the US in 1998 to end the 30-year Protestant-Catholic Irish violence) becoming a “casualty of Brexit”.

Negotiation tactics reflect their strategic goals. The UK must preserve the kingdom’s political unity while the EU must protect the integrity of its single market from cheating competitors at its doorstep. And demonstrate that Brexit is costly—a warning to its own anti-immigration, Eurosceptic secessionist political groups. If strengthened, these forces could unravel the EU. Brexit cacophony has drowned the static over Frexit (France), Nexit (Netherlands) and Grexit (Greece).

The EU would have preferred the UK remain in the bloc not only because of its valuable contributions, but also because, as former American President Lyndon Johnson said, “It’s probably better to have them inside the tent pissing out than outside the tent pissing in.” But being in the tent is irksome for imperial-hungover Britain, used to giving orders, not taking them. “Boris Johnson is on this runaway train of English exceptionalism and heaven knows where it is going to take us in the end,” fretted Lord Chris Patten, the last governor of Hong Kong. 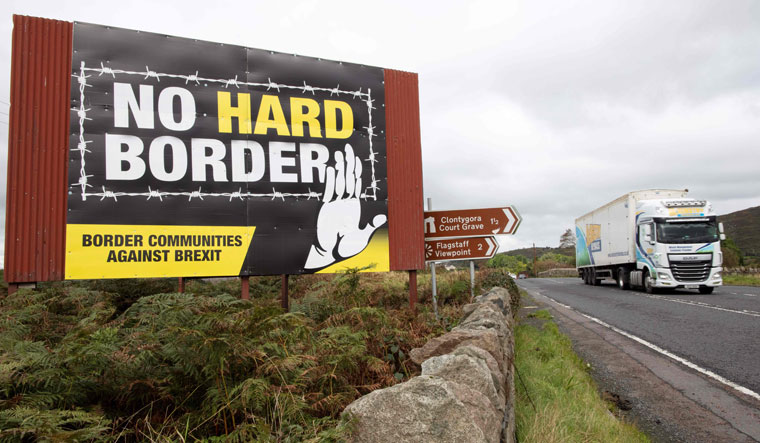 Knotty ties: an anti-brexit billboard on the border between ireland and northern Ireland. Maintaining sovereignty while keeping borders open with Ireland is a key challenge for the Johnson government | AFP

Britannia Unchained (2012), a tribute to turbo-Thatcherism, is a manifesto for a Global Britain charting an independent free-marketeer course. Four of the five authors are in Johnson’s cabinet. But, says author Neal Ascherson, “Post Brexit, Britain will remain chained down by alliances, treaties and new foreign trade rules.” Cambridge University professor Mary Beard said, “When I publicly suggested a few months ago that we really were a quite ordinary country (and none the worse for that), I was deluged with abuse and accusations that I lacked patriotism. It’s about time that we got rid of any illusion that ostriches are good patriots.”

Even patriots must see Britain’s diminished, if not dark, future possibilities: Scottish independence, Irish reunification, economic decline and relegation to the junior league within Europe. Predicted Lord Peter Ricketts, “Biden’s administration will prioritise trade and security matters with Berlin and Paris because London is no longer Europe’s centre of gravity. Britain is not so useful when it is an outlier, rather outside the mainstream of Europe.”

Brexit comes upon Covid-19, which has devastated the economy, public health and Johnson’s reputation. Critics savaged his handling, calling him flustered and floundering, divisive and detail-allergic, casual and clumsy. Britain has the highest Covid-19 deaths in Europe. A Pew survey found 64 per cent Britons believed the EU handled Covid-19 better than their government.

As pandemic cases spiralled, Johnson said they were “flashing at us like ­­dashboard warnings in a passenger jet”. He is better at vivid descriptions than prescriptions. The economy shrank by 20 per cent and the predicted 11.3 per cent fall in national income is the steepest in three centuries. “Our health emergency is not over, and our economic emergency has just begun,” said Finance Minister Rishi Sunak. Together with Covid-19, Brexit comes as a double whammy, prolonging recovery. “Brexit was a fantastic example of a nation shooting itself full in the face,” rued actor Hugh Grant.

Brexit was a wake-up call. It woke up the demons. Now the demons must be pacified if Britain wishes to reclaim its status as both a European and an Atlantic nation, whose strategic interest is to maintain close ties with the EU and the US to tackle common threats—Russian disinformation, Chinese competition, cyberattacks, migration, terrorism and dark money. “Britain is adrift without a bloc,” said diplomat Mark Malloch Brown. “That is challenging.”

But Brexit buccaneers are bullish. It is not just about Great Britain, it is about Making Britain Great Again. We saw what that slogan did to the United States. Besides, greatness may well be a thing of the past. “We are no longer a great power,” says former Tory prime minister John Major. “We will never be so again. We are a top second-rank power.”