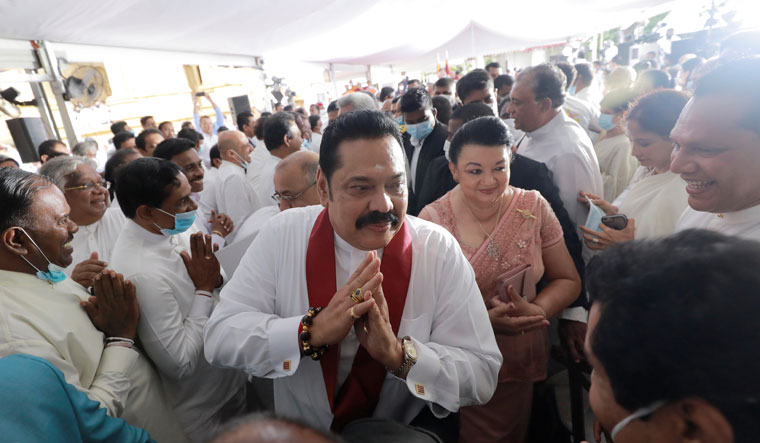 The Sri Lankan parliament elections held on August 5 will go down in history as a watershed moment in the country’s political history. It saw the United National Party (UNP), which was in power till a year ago, getting decimated so thoroughly that it failed to win even a single seat. The other traditional party of the island nation, the Sri Lanka Freedom Party, contested only in a few districts and gave overall backing to the ruling Sri Lanka Podujana Peramuna (SLPP).

The SLPP, founded by Prime Minister Mahinda Rajapaksa and his brothers, including President Gotabaya Rajapaksa, won 145 of 225 seats. With their allies, the four-year-old SLPP crossed the 150 mark, securing an unprecedented two-thirds majority. The last party to achieve such a feat was the UNP, which swept the polls in 1977 under the first past the post electoral system. Under the proportional representation system, which has been in operation since the 1980s, such commanding margins have become almost impossible, leading to post-election crossovers and horse-trading.

Mahinda and Gotabaya campaigned hard to avoid such a situation, seeking a comprehensive mandate from the voters. And, they got it thanks to the weak and divided opposition which failed to learn the lessons from their disastrous presidential campaign last November. The main opposition party this time was the Samagi Jana Balawegaya of Sajith Premadasa, the former deputy leader of the UNP who chose to float his own party following a tiff with UNP leader and former prime minister Ranil Wickremesinghe. After the crushing defeat, Ranil stepped down as party leader.

With the overwhelming mandate for the Rajapaksas, Sri Lanka could be potentially looking at a one-party rule scenario. The new regime will be looking to repeal the 19th amendment to the constitution enacted in 2015 by the UNP regime. The Rajapaksas believe the amendment was brought to keep them out of politics and to weaken the directly elected executive president. Their campaign was focused on convincing the electorate that the repeal has brought the country to an economic, political and security crisis, including the horrendous serial bombings in April 2019.

Another key challenge for the Rajapaksas will be reconciliation with the Tamils and the Muslims. After the civil war, the Mahinda government had appointed the Lessons Learnt and Reconciliation Commission (LLRC) and had taken steps to release and rehabilitate nearly 12,000 LTTE cadres who had no grave charges against them. Steps were also taken to release civilian lands. Yet, all those initiatives remain unfinished.

Dealing with the minorities will test the political and diplomatic skills of the Rajapaksas as the issue is being keenly monitored by the powerful Tamil diaspora, the United Nations, the United States and the European Union. Many Sri Lankans fear that the west is using its economic power to impose its control over Sri Lanka. The country had faced economic sanctions on grounds of human rights violations during the final phase of the civil war.

Disappointment with the west has pushed Sri Lanka close to China, which does not enjoy a stellar human rights record. As a result, China now enjoys a critical economic and strategic hold over Sri Lanka. In the 2015 elections, the Chinese “debt trap” and the 99 year-lease of the Hambantota harbour were key campaign issues. This time, however, the key issue was the pressure exerted by the west, especially the United States.

With the strong parliamentary backing they enjoy, the Rajapaksas are expected to strategically balance the pressure from the west, China and India, all of which want a share of the Sri Lankan economic pie and its support for their strategic designs. India considers Sri Lanka to be in its sphere of influence, while China considers it to be a key part of its Belt and Road Initiative. The US, India and Japan want Sri Lanka to support the ‘Quad’, an informal strategic platform they share with Australia.

India, in collaboration with Japan, has been wanting to run the Colombo port’s eastern terminal, perhaps because it is next to the Chinese-run terminal. But port workers have gone on strike against the proposed deal and have extracted a promise from Mahinda that the terminal will not be handed over to foreigners. It may not be easy for Sri Lanka to wriggle out of its contractual obligations without antagonising India. There are already reports about India dragging its feet on giving Sri Lanka a moratorium on its loan repayments.

Nearly 15 Indian project proposals are pending with the Sri Lankan government since 2017. While Prime Minister Narendra Modi complained about Sri Lanka’s non-response, Gotabaya said India was to be blamed for the delay and that some of the projects were unnecessary. Sri Lanka, meanwhile, wants India to return 25 of the 99 oil tanks in Trincomalee which were given to India in the early 2000s. India, according to Sri Lankan sources, has been using only 15 of them.

SLPP spokesperson G.L. Peiris said the new government would revisit international agreements, though he did not mention any pact in particular. The unprecedented victory of the SLPP is seen as a result of the disillusionment with the attempts of the UNP-led regime to take the country along a neoliberal and pro-western path. Some observers, however, think that the Rajapaksas may find it difficult to free themselves fully from the pressure exerted by the US.

Making the country self-reliant by strengthening its economy will be one of the key objectives of the new government. Gotabaya has a team of intellectuals, business leaders and economists who are expected to assist in setting up a strong platform to boost entrepreneurship in the post-Covid-19 era.

One of the first tasks before the new parliament when it meets on August 20 will be to decide on a fresh vote on account as the government needs time to prepare a full-fledged budget for the upcoming year. For the Rajapaksas, the real challenge may have just begun.