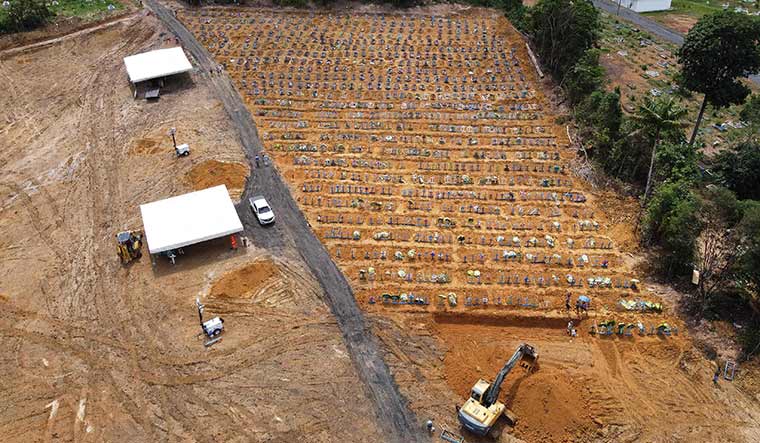 Final journey: The Nossa Senhora cemetery in Manaus has seen a surge in the number of new graves after the outbreak of Covid-19 | AFP 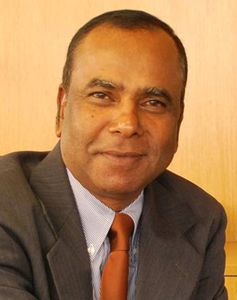 Covid-19 cases in Brazil are growing at an alarming rate, with the number of deaths crossing 11,000 as on May 10. But for President Jair Messias Bolsonaro, it is all a big joke. “My name is Messiah. But I cannot work miracles,” he said. Hearing about the mounting death toll, he responded with supreme indifference, “So what? What do you want me to do?”

In most countries, presidents and prime ministers visit hospitals to comfort victims and support the medical staff. But not Bolsonaro. He was recently seen at a shooting range, grinning at the cameras in front of a bullet-riddled target, saying, “Pretty good, eh?”

Brazil faces a shortage of ventilators, masks and other essential items. But it hardly bothers Bolsonaro. He is more worried about the shortage of guns in Brazil. When governors are scrambling to get ventilators, Bolsonaro wants to see more guns. Last month, he shut down a military project that sought to use blockchain technology to track guns and other weapons. The public prosecutor’s office is investigating the constitutionality of this move.

While presidents of other countries are meeting scientists and doctors for advice on dealing with the virus, Bolsonaro had an unusual guest on May 4. He received at the presidential palace Lieutenant Colonel (retd) Sebastião Curió Rodrigues de Moura, a notorious assassin who killed several left-wing guerrillas in the Araguaia region when Brazil was under military dictatorship (1964-1985).

As Covid-19 infections grow exponentially, mass graves are being dug in cities like Manaus, where a large number of indigenous people have lost their lives. The mayor of Manaus was in tears describing the acute shortage of coffins, medicines and equipment. Unable to get Bolsonaro’s attention, indigenous leaders have approached the World Health Organisation and even climate activist Greta Thunberg. Millions of poor, mostly Afro-Brazilians, live in the favelas (slums) of Rio de Janeiro and São Paulo without adequate water and sanitation facilities. Even the drug-trafficking gangs have started helping them, but not Bolsonaro. The president has ignored WHO advice on Covid-19, but has targeted the world body, saying it promotes masturbation and homosexuality among children.

The president has not been supportive of officials who have been working hard to tackle the pandemic. He has sparked protests by sacking his popular health minister, Luiz Henrique Mandetta, after repeated clashes over handling of the crisis.

According to a study by the University of São Paulo, Brazil may already have the most number of Covid-19 cases in the world. But testing is minimal in the country due to the lack of federal government support. Bolsonaro continues to downplay Covid-19, calling it a “simple cold” and a “fantasy” and “hysteria” promoted by the media to weaken his government. Such talk clearly misleads and confuses the general population. He criticises the lockdown imposed by state and municipal authorities and calls social distancing measures imposed by governors and mayors as “crime”. He goes around shaking hands and taking selfies with his supporters at rallies organised by his sons and allies. He wants to resume football games, arguing that players are less likely to die from Covid-19 because of their supreme physical fitness. Bolsanaro once said, “Brazilians could swim in excrement and still emerge unscathed”. He even launched a #BrazilCannotStop campaign which asked people to get back to work and normal life. The move was banned by a federal judge.

At least 20 officials of the Bolsanaro administration, including national communications chief Fabio Wajngarten and National Security Minister Augusto Heleno, have tested positive for Covid-19, but the president scoffs at preventive measures. On May 8, Bolsanaro said he would celebrate the weekend with a barbecue at the presidential palace. But a day later, after facing widespread criticism and being threatened with a lawsuit, he called the news about the barbecue fake, blamed journalists, and was seen riding a jet ski on Lake Paranoá. He stopped to chat with a group of people who were barbecuing on a speedboat. 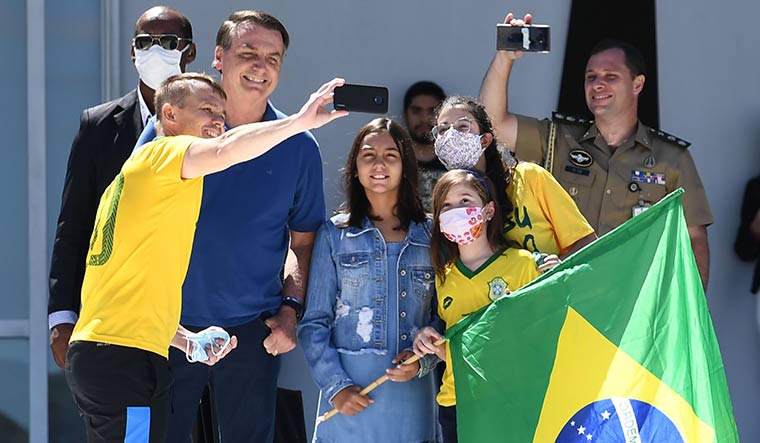 Fan base: Brazilian President Jair Bolsonaro and his daughter Laura pose for a selfie with supporters outside Planalto Palace in Brasilia | AFP

Bolsonaro attacks journalists day in and day out, often using the language of street thugs. Following his cue, his supporters have even physically attacked journalists at the president’s rallies. Bolsanaro and his sons spread fake news on social media, forcing Facebook and Twitter to remove some of their posts. The prosecutors are investigating fake news campaigns of the Bolsonaros.

The president does not even spare the Congress and the judiciary. He routinely incites his followers to shout slogans in favour of military dictatorship. The attorney general is investigating one such case of sloganeering outside the army headquarters when Bolsonaro was present. The defence ministry issued a statement on May 4 saying the armed forces were dedicated to their constitutional mission and democracy.

For Bolsonaro, protecting and promoting his family comes first. He recently fired the chief of the federal police and appointed a family friend in his place to scupper ongoing criminal investigations against his sons and allies for murder, money laundering and disinformation campaigns on social media. Justice minister Sérgio Moro resigned recently after publicly accusing the president of criminal obstruction of justice. The supreme court subsequently vetoed the appointment of the new police chief and ordered an investigation on the basis of Moro’s charges. The president has now proposed another family friend to the post. The association of the members of the federal police has written to Bolsonaro to “keep the constitutionally-required distance” and not interfere in the day-to-day work of the police to maintain objectivity and public confidence. 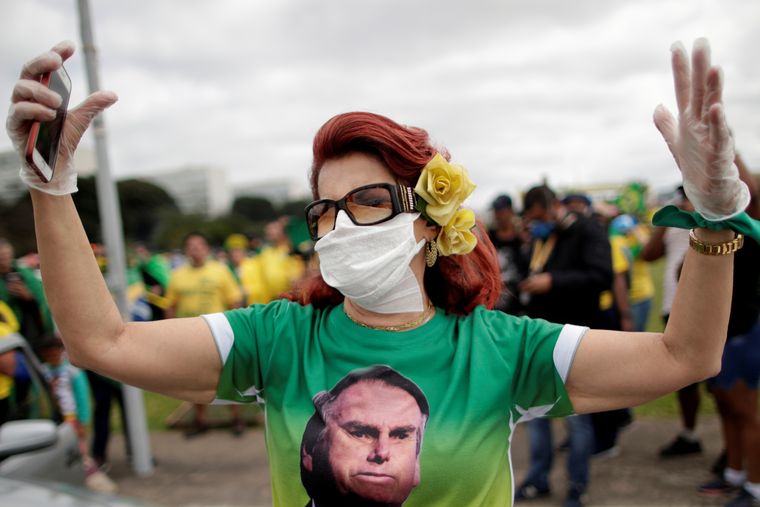 Blind support: supporters of bolsonaro in a protest against the supreme court | Reuters

Last year, Bolsonaro had tried to make his third son, Eduardo, Brazil’s ambassador to the US, saying ‘Eduardo and President Donald Trump’s sons are friends’. But Eduardo had to withdraw his candidacy following widespread protests against such blatant nepotism.

Besides polarising the country with his hate-speech, the Bolsonaro clan continues to burn bridges with the world. He had insulted the wife of French President Emmanuel Macron and made disparaging remarks against President Alberto Fernández of Argentina, Brazil’s neighbour and most important regional partner. He had provoked China, Brazil’s top export destination, by visiting Taiwan during his presidential campaign. Sino-Brazilian relations deteriorated further after Eduardo criticised the absence of democracy and transparency in China and also its handling of the Covid-19 pandemic. The Chinese embassy in Brasilia made a scathing counterattack, saying the president’s son had contracted a “mental virus” while he was in the United States. “Sadly, you are a person without any international vision or common sense. We suggest you don’t rush to become the US spokesman in Brazil,” said a statement by the embassy. The sharp reaction prompted some state governors and exporters to apologise to the Chinese ambassador, especially as they have been hoping to procure masks, protective gear and ventilators from China.

Bolsonaro’s ministers, however, are competing with each other to impress the boss with their own incendiary statements. Foreign Minister Ernesto Araújo wrote that Covid-19 “could be a global project to transform the world into a concentration camp and impose communism via the ‘comunavirus’”. Education Minister Abraham Weintraub tweeted that the pandemic would serve Chinese interests. In his tweet in Portuguese, he substituted the letter ‘r’ in ‘Brazil’ with ‘L’ so that it read ‘BLazil’, a style used to mock Chinese accents. The Chinese ambassador called Weintraub a racist and the supreme court has ordered an investigation into the minister’s action.

Critics fear that the Bolsonaro administration has managed to undo in less than 16 months the excellent work done by Brazilian diplomats over the past two decades. Bolsanaro has shocked the world with his bigotry on several issues, including global environmental concerns. Brazil today stands completely isolated on the issue in sharp contrast with the leading role it played during President Lula’s time. On April 20, Brazil voted against a UN General Assembly resolution co-sponsored by 179 countries seeking global access to medicines and vaccines to tackle Covid-19. It was ironic as Brazil had in the past successfully led developing countries in their fight for affordable HIV/AIDS medicines, even breaking a few international patents in the process. Marking a complete turnaround in its foreign policy, Brazil recently voted against a pro-Palestine resolution in the UN, further alienating several countries in the developing world.

The only bridge Bolsonaro has built so far is with Trump, his role model. But this is temporary and unsustainable. Although Bolsanaro wants total alignment of Brazil’s foreign policy with that of Trump’s, he has been restrained by his own foreign office and military. For instance, his decision to shift the Brazilian embassy in Israel from Tel Aviv to Jerusalem has not been implemented.

Most people voted for Bolsonaro in 2018, in a clear verdict against the corruption scandals involving the Workers Party and other mainstream political parties and leaders. There was a massive anti-incumbency wave across Brazil, which benefited Bolsonaro. But many of those who voted for him regret their decision now. People are horrified to see his inhuman approach towards the pandemic. People had hoped that the power and prestige as president might make him moderate and pragmatic. They are disillusioned to see that he has become worse and even incites anti-democratic attacks from the presidential palace. Millions are now protesting, banging pots and pans and yelling “Bolsonaro out” whenever the president comes on television. They are afraid that the longer Bolsonaro continues as president, the worse it will be for the country.

Sensible politicians, businessmen, civil society leaders and professionals consider Bolsonaro more toxic than Covid-19. The president does not have the support of any major political party. He has moved from one fringe party to another eight times so far. During his presidential campaign he was with the Social Liberal Party. He quit last November over a dispute on the control of campaign funds and launched his own party called the Alliance for Brazil with himself as president and his eldest son Flavio as vice president. But it does not have any other recognisable leaders.

The Congress has already received at least two dozen impeachment petitions against Bolsanaro. It had impeached president Dilma Rouseff in 2016 for budget manipulation. It was nothing compared with the charges being levelled against Bolsonaro. However, he enjoys the support of the bible, bullet and beef lobby comprising evangelicals, rich landlords and the cattle and meat industry, which uses him to advance their own partisan agenda. Some other legislators are willing to support him thinking that this is the best time to bargain for favours and pork barrel (appropriations made for projects that are not essential but are sought because they pump money and resources locally).

Former president Fernando Henrique Cardoso cautioned that Bolsonaro’s authoritarian impulses could lead to the return of the military dictatorship. Rodrigo Maia, president of the Brazilian Chamber of Deputies, tweeted, “The whole world is united in the fight against the coronavirus. In Brazil, we have to fight against the coronavirus and the virus of authoritarianism.”

The author is a retired diplomat with extensive experience in Latin America.