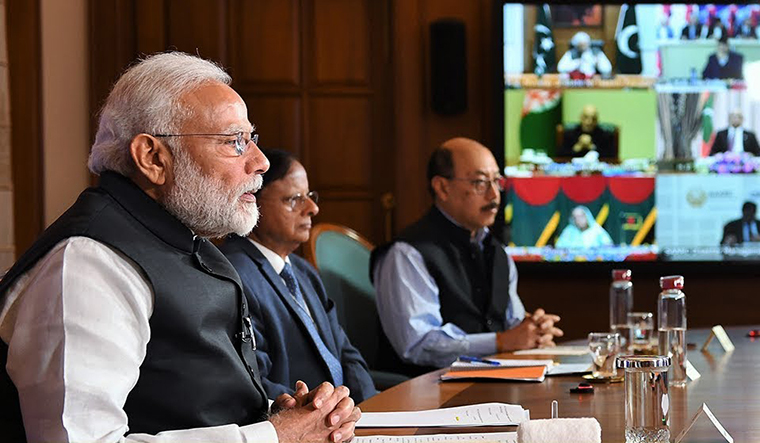 Together we fight: Prime Minister Modi in a video conference with SAARC leaders

It was a small, virtual step, but it could be a giant leap for the entire south Asian region. Prime Minister Narendra Modi on March 15 connected with leaders of the South Asian Association for Regional Cooperation (SAARC) over video conference and discussed strategies about putting up a united front against Covid-19.

“Our region is home to one-fifth of humanity,’’ said Modi, opening the conference. “As developing countries, all of us have significant challenges with access to health facilities. Our people-to-people ties are ancient. Our societies are deeply interconnected. We must all prepare… to act… and to succeed together.”

The significance of Modi initiating the meeting—appreciated by the US and Russia—cannot be ignored. Equally important is the sheer magnitude of the battle ahead. All countries were represented at the meeting by their heads of state or government. Presidents Ibrahim Mohamed Solih of the Maldives, Gotabaya Rajapaksa of Sri Lanka and Ashraf Ghani of Afghanistan, Prime Ministers Sheikh Hasina of Bangladesh and Lotay Tshering of Bhutan were present. Nepal Prime Minister K.P. Sharma Oli, who underwent a kidney transplant in March, also attended. The only exception was Pakistan, which was represented by Zafar Mirza, special assistant to Prime Minister Imran Khan.

This was the first time a SAARC summit was held after the Kathmandu meeting of 2014. Modi’s diplomatic initiative has come at a time when domestic issues in India, like the Citizenship (Amendment) Act, are hurting its external relations. Friendly neighbours such as Bangladesh, Afghanistan and Nepal are concerned about the Act and its implications.

“I think the ‘neighbourhood first’ premise is behind the prime minister’s initiative,’’ said K. Yhome of the Delhi-based Observer Research Foundation. “The fact that SAARC has been activated means geographical factors have definitely influenced the decision.” Soaring number of infections reported from the neighbourhood seems to be a likely factor.

“This is a case of Modi wanting to show regional leadership at a time when it is badly needed,’’ said Michael Kugelman, deputy director of the Asia programme at the Wilson Center, Washington, DC. “India is often criticised for not taking on a global role commensurate with its size and stature. Modi's initiative is a way to showcase India's clout and convening power abroad.’’

India has promised $10 million towards an emergency fund, which countries can dip into. Nepal has donated ten crore Nepali rupees (approximately $8,24,000) and Bhutan $1,00,000. India has also promised a rapid response team of doctors and online training. A meeting between health professionals of SAARC countries was held on March 26 to find practical solutions to deal with the pandemic.

While Pakistan participated in the meetings, the distrust remains. “The meetings and the emergency fund were called by Modi. So, while it focuses on collaboration between countries in the region, it remains essentially an initiative driven and coordinated by India,’’ said Constantino Xavier of Brookings India. “This is why Pakistan has asked for the fund to be placed under the SAARC Secretariat. It is unlikely that India will accept this, but other countries may pressure Delhi to formalise cooperation under SAARC, which has its own history of public health cooperation.’’

The video conference had its share of drama when the Pakistani representative chose to bring up Kashmir, only to be snubbed by Modi. Pakistan’s reluctance to be enthusiastic, however, plays perfectly for India. With the deep freeze in its relationship with Pakistan, India has turned its attention to BIMSTEC (Bay of Bengal Initiative for Multi-Sectoral Technical and Economic Cooperation). External Affairs Minister S. Jaishankar has made it clear that India’s attention during Modi’s second term will be directed towards BIMSTEC and not at SAARC.

On the sidelines of the UN General Assembly last September, Jaishankar spelt out India's problem with SAARC: "Elimination of terrorism in all its forms is a pre-condition not only for fruitful cooperation, but also for the very survival of the region itself.” Trade is another area of concern. “You can't have regionalism without talking connectivity or talking trade,'' said Jaishankar at a meeting held in Delhi last month. “It is like saying I would like to do regional cooperation. But I am not going to allow connectivity, not going to give you MFN (most favoured nation status). Then, obviously, you are not serious.''

So, does Modi’s SAARC move suggest a rethink? “BIMSTEC remains a weak organisation which is unable to offer any added value during this crisis,” said Xavier. “Pakistan may be one reason why India became reluctant about SAARC and eventually gave up investing in it, but there is a deeper reluctance in Delhi to invest in stronger regional organisations to foster multilateral cooperation with its neighbours.’’

Covid-19 has given India an opportunity to earn back the goodwill it lost in its neighbourhood. But the gains may not last in the absence of systemic changes. “We have seen powerful regional cooperation during humanitarian crises in the past, like India's relief efforts to help Pakistan after the 2005 earthquake,” said Richard M. Rossow, who holds the Wadhwani Chair in US-India Policy Studies at the Center for Strategic and International Studies, Washington, DC. “But despite these positive flashes, they did not translate into longer-term positive cooperation. So, while regional cooperation during the Covid-19 crisis is helpful, I suspect it will be difficult to enact it in practice, and any positive political effects will be short-lived.”