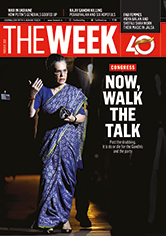 It is about time the Gandhis—Sonia, Rahul, and Priyanka—took their positions seriously and rejuvenated the Congress cadre and supporters, even if that means staying away from the leadership role for a while (‘The grand old mess’, March 27).

Having said that, it is too early to write off the Congress, which has capable leaders across the country. The party, at the moment, is going through a do-or-die crisis and has to ensure good performances in elections in Gujarat, Himachal Pradesh and Karnataka. Factionalism in the Congress is one of the major reasons for its defeat in polls. The new leadership that will emerge in the coming months should fix it and inspire the cadre.

The Congress, which was once the colossus of Indian politics, is facing an existential crisis. Its decline has been gradual. The Gandhi-Nehru adhesive that held the Congress together has faded. I am reminded of a story: A man went to a Mercedes showroom and purchased a brand-new car. After he drove 70km, the car stopped. So, he informed the employees at the showroom, who sent the most experienced mechanic. The mechanic checked, and, to his amazement, found that the car had no engine! Upon hearing this, the car owner asked the mechanic how the car came this far without an engine! The mechanic said, “On its reputation, sir.”

The Congress needs to put in a new engine if it has to go any further.

Your cover story on the debacle of the Congress should force its leaders to introspect. However, this is not the end of the road for the Congress, which needs to start afresh and bring in drastic changes.

The Nehru-Gandhi family needs to take a back seat to revive the Congress. The grand old party of Indian politics can no longer rely on its glorious past. It must open its windows and bring in winds of change.

It is the same old story for the Congress after every election, with no proper introspection or even an attempt to analyse what ails the party. It does not need rocket science to figure out why the party is limping from defeat to defeat in most of the elections held since 2014.

What prevents Congress leaders from accepting the Gandhis’ offer to resign? As if it is predetermined that this exercise will continue each time there is a poll debacle and ultimately Gandhi loyalists will say that there is no need to think beyond the family.

As long as the party’s top brass does not see the writing on the wall and the so-called rebels desist from making the right moves, we should not be surprised if the Congress is confined to the dustbin of history.

It is high time the Congress reinvented itself by making a generational change in the leadership under the presidentship of Rahul Gandhi and thereby bringing in a youthful Congress Working Committee. In a democracy, nothing is impossible.

It is too early to call the winners of the general elections in 2024.

Vladimir Putin has almost lost his patience and has not made much progress in Ukraine. What’s more, in frustration, Putin has declared that he may resort to atomic war (‘Shooting in slow motion’, March 27). Russia is not behaving like a senior member of the UN Security Council. It cannot threaten the world with atomic war.

This could be the last straw that breaks the camel’s back. Every country in the world should react to Putin’s statements, and give him a stern warning.

Putin should open his eyes and realise that any irresponsible, hasty, mad act of indulging in an atomic war will lead to his ruination.

I want the media to condemn Putin for extending such threats.

Swara Bhasker is at it again—writing illogically. Being a columnist does not give the unfettered right to anyone to feed the public with gibberish (‘Bitter chocolate’, March 27). She has failed to understand that the court rules on matters as presented in an affidavit by the plaintiff.

Schools and colleges have a dress code that students have been following for decades. Then, why this controversy now? Was it instigated? Is this an indication of things to come? Will Muslim women who join the defence, paramilitary, and police forces insist on wearing a hijab while on duty?

These are some of the questions Swara should have attempted to answer rather than blindly blaming the judiciary.

When it comes to choosing between hijab and kitab, we should be aware that students attend schools and colleges to study, and not with any other objective.

If hijabs are allowed as a part of school uniform, Muslim girls who are presently not wearing hijab may be forced to wear it by their parents.

All these years I have enjoyed reading THE WEEK, from which I have received ample information about current affairs. I enjoy reading the Leisure and Aperitif sections.

I am indebted to the editor for publishing interesting and inspiring articles, and for the mind-blowing information that the magazine provides.