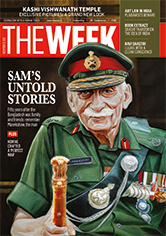 I enjoyed your cover story on Field Marshal Sam Manekshaw (‘Shades of Sam’, December 12). Many years ago I had the honour of interviewing him at his Coonoor home. It was made possible via his daughter, Maja, an old friend of mine.

After a day of filming at his home, later that night, we discovered that the sound recordist had erased our footage. In utter despair, I rang Manekshaw to explain what happened. I was stunned when he agreed to re-shoot the main part of the interview at 4.30am the next day—as he had to leave for Coimbatore at 6am.

What a marvellous human being Manekshaw was to have understood the situation we were in! I can never forget his gracious kindness.

Your cover story on Manekshaw was truly inspiring. He was a dedicated, honest and an upright soldier who not only inspired men in uniform but also civilians. He minced no words, even with the powers that be. He did not allow political interference in the Army.

Manekshaw’s life and service to our nation was beyond awards. He was a legend who will continue to inspire many.

Your cover story on Manekshaw was well-researched, and a collector’s issue. I thank all writers for an excellent piece of work; other stories in the issue also made for a good read.

Kudos to THE WEEK.

Pooja Biraia Jaiswal and R. Prasannan have excelled themselves, very effectively bringing out the colourful life and times of a remarkable man—the late Manekshaw.

Let me congratulate THE WEEK for this. However, the issue was somewhat marred by the cover picture, where Manekshaw resembles my friendly neighbourhood security guard at the local cinema. Please make sure that his daughters, Maja and Sherry, do not get to see this particular picture of their father! They will be very unhappy.

As a piece of art, Bara Bhaskaran’s portrait of Manekshaw was excellent, but positioning it on the front cover was, I feel, somewhat inappropriate.

Manekshaw was a true soldier—a Gurkha at heart. I am fortunate to have interacted with him on several occasions while I was posted as Directing Staff at the Defence Services Staff College in Wellington, from 1998 to 2000. I also interviewed him for the DSSC magazine, Owl.

I have preserved the photograph shot when I received a prize from him at the DAV College, Chandigarh, in December 1971 (after the Indo-Pakistan war); Manekshaw was invited as the chief guest. He will always remain a hero for Army officials.

The strategic surgical strike executed with masterly perfection by Manekshaw, with diplomatic assistance from Indira Gandhi and Admiral [Sardarilal Mathradas] Nanda gave birth to a new nation called Bangladesh and clipped the eastern wing of Pakistan. Manekshaw’s jovial nature, behind that steely exterior, endeared him to his associates.

The fondness and affection shown by Manekshaw towards his family is wonderfully recalled by his daughters in your cover story.

Shashi Tharoor appears to blame the ruling dispensation at the Centre for the impasse in Parliament (‘Destroying pillars of India’s democracy’, December 12). But who is creating all the pandemonium there? The entire last paragraph of Tharoor’s column should a strong message to the members of the Opposition

It is estimated that the material requirement for thermal solar systems is more (per unit of energy) when compared with fossil fuel plants (‘Future shock’, December 5).

According to Christopher Monckton, an environmentalist, global warming is something of a misnomer. In my opinion, we should invest in developing equipment that can harness tidal energy without damaging flora and fauna.

I do not know how Smriti Irani has woven the tapestry of details around Naxalism, and what has compelled her to write about it. But she has made her mark as a writer of considerable merit. Good going, Smriti (‘Politics to page turner’, December 5).

THE WEEK is not inclined to any political party or religious group. It is neutral and brings to us news that is true.

I have admired the courage of the magazine to boldly speak on Indian politics. I hope all other news publications and social media sites follow you.

The report in the cover story that our wedding was held in Fort William Army headquarters in Calcutta, and that General Sam Manekshaw had offered us his Sheerline car to leave Fort William is factually wrong. After Tiger [Mansoor Ali Khan Pataudi] and I were engaged, my parents were looking for a suitable venue in 1968. They wanted a secure venue, as some threatening calls were received. A family friend suggested Fort William. However, when the authorities heard that Tiger’s relatives from Pakistan would be attending the wedding, they said the policy was to not allow foreigners into Army campuses.

So, my parents arranged the reception at a friend’s home. A large number of fans had gathered outside, as Tiger was a famous cricketer and I was at the peak of my film career. The fans kept cheering us. Hence, there was no question of there being a dangerous situation, nor did we travel in a military car, let alone in Manekshaw’s Sheerline.

In fact, we met Manekshaw in 1971, when the Army hosted a screening of my film Amar Prem. I have pleasant memories of our meeting with him.

We deeply regret the error.

Ravi Shastri was candid in his interview with THE WEEK (‘The team exceeded my expectations’, December 12). The coaches before Shastri were loosely monitored by the BCCI; they were not held responsible for a poor performance. But Shastri bore the brunt. That India could not win any ICC title under his tutelage need to be seen only as an aberration when weighed in with a whopping 25 Test wins out of 43. He maintained excellent harmony with all players and had a special bond with Virat Kohli.

For all his good work, Shastri got few bouquets and a barrage of brickbats.

The affable Rahul Dravid has a Herculean task before him, for he has replaced a tough predecessor who has produced results. Shastri can look back with pride.