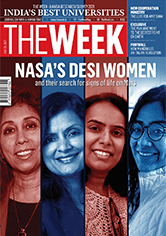 Your cover story on the four Indian-origin women at NASA was insightful (‘Women of perseverance’, July 25). These high achievers are going to be an inspiration for so many women in India. I am happy that all four of them have equal partners in their spouses who are quite supportive.

There are so many men and women of Indian origin in the US, and other western countries, who have made us proud.

Overseas Indians and people of Indian origin should do everything they can to help India prosper and grow.

The cover story on NASA’s desi women made an interesting read.

I used to work in Hindustan Latex in Thiruvananthapuram, and had the opportunity to associate with the Indian Space Research Organisation in a small way. The first time was to watch the launch of the Nike-Apache sounding rockets from the Thumba Equatorial Rocket launching station. As an engineer I knew this was a big leap towards self-sufficiency in the field of rocket technology for our country.

It is good that ISRO has opened up its facilities for private players. In my opinion this will speed up our space programme. It will also give our young engineers an opportunity to propel India’s space dreams.

The cover story on NASA’s desi women read like a thriller.

THE WEEK is truly journalism with a human touch. Keep up the good work.

I request you not to stop Anuja Chauhan’s columns, precisely because your magazine is reputed for its objectivity (‘Letters’, July 25). We need liberal and ethical voices to be heard, even if they are in a minority.

If people want to read sycophantic and dishonest articles, they can read it for free on WhatsApp and Facebook.

It was disappointing to read personal criticism of Chauhan in the letters section. Chauhan deserves plaudits for clear articulation of what ails our country, and our collective failure to protect the cherished ideals of the Constitution.

Chauhan’s irreverent style of writing, while refreshing, is an uncomfortable reminder of the urgent need to rediscover ourselves and restore national unity.

What is the message?

Shobhaa De (‘Detour’, July 25), in a way, vindicates the divorce of Aamir Khan and Kiran Rao by calling it one of the stellar examples of Bollywood separations.

De is silent on the reasons for the celebrity couple’s parting ways while dwelling heavily upon the deftness with which they managed their divorce.

Is it blissful for Khan and Rao to part ways with each other? Or, is De trying to inform us succinctly about the strange ways of Bollywood marriages and divorces, and that the Khan-Rao separation is unique among them?

Until some time ago our universities were free from the shackles of Hindu fundamentalism (‘Last word’, July 25).

The BJP is holding institutions of higher learning to ransom by telling them to toe its line.

The Narendra Modi government can’t take even mild sloganeering in its stride and brands the protestors as anti-nationals. The hindutva forces should let universities do their job of enlightening students about the past, present and future.

Tharoor’s write-up on universities and interference by the present government was biased. We expect better write-ups from Tharoor, who is a distinguished administrator and now an MP.

Mani Shankar Aiyar’s column on Jammu and Kashmir was thought-provoking (‘Manifesto’, July 18). The issue dates back to 1947, when India annexed J&K on the pretext of preventing Pakistan’s aggression and onslaught. Jawaharlal Nehru and Sheikh Abdullah tried to foster peace in the valley.

Prior to independence there was peaceful coexistence and religious harmony in the state. But the dilly-dally over implementation of Central policies pushed the state into a battlefield, and certain divisive forces fanned religious sentiments forcing the Pandits to flee the valley.

The abrogation of Article 370 has evoked mixed response. Love begets love. Finding a permanent peaceful solution in J&K would only be possible with the active involvement of local leaders and people. Winning over the hearts of the people of the valley is the first and foremost thing in fostering peace. Otherwise, J&K will become another Palestine, which is on fire for several decades.

The hard part of memory keeping is that you wish the distance between the past and the present gets blurred. My dad, Dr. R.P. Singh, an avid reader and a keen observer of Indian politics, would never let an edition of THE WEEK go by without a cover-to-cover read. THE WEEK still comes, but does not find its reader.