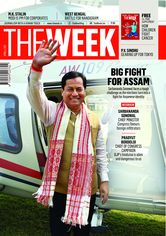 It is going to be a comfortable victory for Sarbananda Sonowal-led government in Assam (‘Return of the native’, April 4).

The Congress leaders are campaigning hard in the state, but it has failed to produce an effective counter-narrative to the BJP, which has already capitalised on the Congress’s alliance with Badruddin Ajmal to its advantage. Its campaign is centred on polarising the 61 per cent Hindus in the state.

The Congress should have had a chief minister face in the state. By aligning with Ajmal’s party, it will lose some of its traditional voters. Nevertheless, Assam’s Muslim population is growing, and we will some day find a Congress-All India United Democratic Front government in the state, one where the AIUDF will call the shots.

Anita Pratap’s column ‘Keep the faith, baby’ (April 4) was beautiful and subtle, not hitherto touched upon by any other writer. Some experts might have exuberantly predicted a baby boom because of a period of inactivity during Covid, while confined at home.

Though there is a specific record of the number of lives swallowed by the pandemic, a mechanism is absent to measure indirect ravages of the virus, like loss of jobs and a huge standstill in the education system.

The findings in many countries reveal a big drop in procreation. As Anita rightly observed, the socio-economic crises unnerved many and a baby was not on their mind. But as an eternal optimist I predict a boom—nature has its ways of healing.