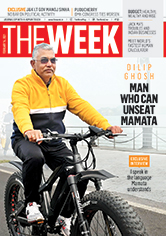 It will be foolish of the BJP to project Ghosh as the chief minister candidate. Such a decision, at this stage, will help Mamata Banerjee.

For the BJP, it is always safe to fight state elections in the name of Modi, and, thereafter, if it wins, select a suitable chief minister.

To say that Ghosh attracts unprecedented crowds is a bold statement, and an indicator of the tilt in West Bengal politics.

It is well known that Banerjee inherited the same followers who were subjugated by the CPI(M).

Mamata has treated the Centre with scant respect and has refused to implement Central schemes. Didi’s appeasement politics has already alienated her from the Bengali bhadralok (gentry), and she is facing her toughest challenge.

Removing Banerjee as the chief minister of West Bengal is easier said than done. If the BJP projects a chief minister candidate, it is surely going to lose. Mamata still has the same popularity in many parts of West Bengal. The BJP should tread carefully in the coming months.

Exempt 70 plus from IT

The budget outlay for the well-being of citizens is definitely a shot in the arm for the health care sector, but income tax relief for those above 75 is going to be of little use (‘Betting big on faith and hope’, February 14).

India’s population stands at approximately 136 crore, and out of this, a minuscule population must be above 75. We should remember that the average life expectancy in our country is around 69. How nice it would have been if all those who are above 70 are totally exempted from income tax?

It is becoming difficult to sustain the cantonment boards and if they are decommissioned to be merged with civil bodies, big players in the real estate sector would gobble up the land, the vegetation, and, perhaps, some heritage structures (‘PMO Beat’, February 14).

To avoid it, can the government consider an alternative, where cantonments would be allotted to set up educational institutions, as envisaged in the National Education Policy, 2020? Being a country with a thriving young population, there is a growing demand for high-quality educational institutions. A demand that is still unmet, because of space crunch.

R. Prasannan has touched upon a sleeping volcano of the past. We can raise another standing army if we decide to get rid of the 62 cantonments occupying 1.63 lakh acres, and a colossal 17.57 lakh acre outside the cantonments. That is, acres and acres of camping grounds, which lay on the routes of marching columns of yore and are of no use any more.

In his thought-provoking column (February 7), Jyotiraditya Scindia has tried to dispel rumours about the Covid vaccine. It is a matter of satisfaction that the government has put a reliable mechanism in place, consisting of doctors and specialists, to track down adverse events from vaccines in every state.

It is disappointing that some politicians are trying to gain political benefit by spreading lies about vaccines.

Rishabh Pant is not a handy wicketkeeper for Test matches (‘It was the biggest moment of my life’, February 7). Pant has admitted that he is a better player in front of the wickets than behind. He should be more patient while batting in Tests, and should not fall prey to wily bowlers and throw away his wicket. Pant should improve his wicketkeeping skills if he is to continue in Tests.

Your article has put things into perspective and rightly highlighted that Indian vaccine diplomacy could be a big game-changer in the fight against the pandemic (‘Vax Indica’, February 7). It seems to augur well in strengthening ties with other nations and earning their goodwill.

President Ram Nath Kovind presented a cheque for 05,00,100 for the construction of the Ram Temple in Ayodhya. As the constitutional head of the country, isn’t he expected to safeguard the secular credentials of the nation? (‘Manifesto’, January 31)

It would have been better if Kovind had not given it publicity, and had sent the offering directly to the temple.

This is to convey my appreciation to the entire team at THE WEEK. Despite restrictions and limitations due to Covid-19, you have ensured that the magazine is available to readers on a weekly and timely basis.

Congratulations to your team. This is journalism with a superhuman touch.