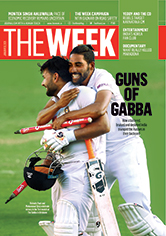 Lessons from the victory

Your cover story has key takeaways for cricketers and professionals (‘Gobsmacked at the Gabba’, January 31).

To win, the leader of the team and other members have to demonstrate aggression, calmness and a good strategy. This is what the victory in Gabba has taught us:

v When given an opportunity one should grab it with both hands, as well demonstrated by Washington Sundar, Shubman Gill, T. Natarajan, and Shardul Thakur.

v Never give up even when you are hurt or abused. Cheteshwar Pujara got hurt more than 11 times, but he did not give up.

v The onus is on all to give direction to the team, not just the leader. Every individual has to lead from within and understand the consequences, if a goal is not achieved.

I am proud of our cricket team, especially the younger players. But they have to remember that public memory is very short, and with one or two poor performances, the adulation is likely to turn to resentment and outright hostility.

A downturn is inevitable in cricket, where many factors other than skill affect the performance. We should remember that even the house of a dignified and solid performer like Rahul Dravid was once stoned when he performed poorly.

The Indian team has crafted one of its greatest Test series victories by beating Australia and retaining the coveted Border-Gavaskar trophy. Blessings, sometimes, come in disguise. With the ignominious loss at Adelaide, a captain on paternity leave, regulars back home with injuries and rampant racial abuse, it was do or die for Ajinkya Rahane and his bunch of talented rookies. And, they went in for the kill.

Winning brings with it so much joy, but if you are a victor against the best, it becomes even more mesmerising.

India’s Test series victory against Australia was a treat for every Indian. They triumphed against all odds and proved that determination and sheer grit can make you win, irrespective of challenges thrown by destiny.

I agree that in the case of Tibet, India should work with the US to provide moral support to the Tibetans (‘Tibet’s on the table’, January 31). India’s support to Tibet is a necessity, if China’s aggression is to be thwarted.

India should extend moral support to the Dalai Lama and the Tibetan government in exile. China should never be trusted.

Srikanth Kondapalli is correct when he said that the threat of sanctions from the US many not work with China.

If the US and India join together, we can put some pressure on China on the Tibet issue.

The election of Kamala Harris as first woman vice president of the US is historical in every sense (‘The wonder that is Kamala’, January 24).

Biden and Harris are bound to change America’s political history.

While Donald Trump proved beyond doubt, through his words and deeds, that he is a divider of the country, Biden has vowed to be a unifier by all means.

History has a long list of powerful dictators who have crumbled, unable to face the wrath of the people. With his fall and unceremonious exit, Trump has also got his name enrolled in the list.

January 20, 2021, is a red letter day in Indian history, since Harris took oath that day. This is the topmost position that any person of Indian ancestry has ever occupied. There is also the likelihood of Harris becoming the president of the US in future. Of late many women of Indian origin have made it big in various fields. This is what is called women power. All hail, Indian women!

Trump, before the virus, secured the best economy in the US in years. Employment improved greatly for all races. During the pandemic, to protect his citizens, Trump shut down travellers from China and some called him a racist. Trump fronted his own money to get the vaccine going as soon as possible. Why are these noteworthy actions not presented in your reports from the US? This would give you more credibility and make you seem less biased.

No person or administration is as black and white as you wish to make it appear. While I do not agree with everything Trump did, he was refreshing and had the ability to think independently. Maybe you could learn a bit from Trump.

I think it is fair to give Biden a chance, but I am concerned about higher middle class taxes and a trillion undocumented people stretching our already tapped out social security, welfare and free medical care systems.

Farooq Abdullah said he cannot even kiss his wife because of Covid-19 (‘Point blank’, January 31). It seems Abdullah has a lot of misunderstanding about the virus. If both the Abdullahs are Covid negative and healthy he can boldly indulge in kissing, hugging, cajoling and much more, if his body is ready, without lamenting in public over it.