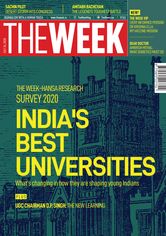 THE WEEK-Hansa Research Survey 2020 of India’s best universities was comprehensive and informative. Universities, across the country, are awaiting government directions on opening. So, this is the best time for students to be mentally prepared for the courses that they have opted for. They can even enrol for short online courses, which will benefit them a lot (‘Degrees of change’, July 26). It is good to know that many Indian universities, during the lockdown, have opened full-fledged online courses. But the fact that only around 12 per cent of Indian households have uninterrupted electricity and good internet coverage is a cause for concern, and will spoil everything that we are planning in such a situation. The government needs to address this issue, and help in bringing in a bandwidth revolution in the country. Tigin Thomas, On email.

In the last five to six years, so many students have gone abroad for higher studies. In my own family, most children have made up their mind to study abroad. This, despite the havoc caused by the pandemic.

A recent study has revealed that only a handful of Indian colleges and universities conform to international standards. And that, in the recent past, around 17 million students have left the country for greener pastures.

It is time the government came up with many more opportunities and high-class universities for students across different fields. Or else, India will be laden with senior citizens.

I am a 79-year-old senior citizen who has been reading THE WEEK from the time I was in service.

To be honest, your cover story on best universities was of no interest to me. There were only a few stories that I liked in the issue. You should be catering to the interests of all your readers.

This is not the first time that we have come across custodial deaths, but the gruesome death of the father-son duo at the hands of the police in Sathankulam in Tamil Nadu has shaken the conscience of the people of the country (‘Capital punishment’, July 26).

While everyone was expecting a proper enquiry into the alleged dastardly act, it was depressing to hear the chief minister of Tamil Nadu say that both the father and son died of illness, which is tantamount to shielding the perpetrators of the heinous crime.

It is thanks to the timely intervention of the judges of Madras High Court that the criminal policemen were arrested. Subsequently, the case was handed over to the CBI.

One expects that a proper enquiry would be carried out by the CBI, and that justice will be rendered to the family of the deceased.

Now, Swapna Suresh will be remembered as a fugitive who was on the run before she was caught by the NIA (‘Golden opportunity?’, July 26). I can feel the trauma that Swapna’s daughter is going through.

THE WEEK should come up with a feature story on such women convicts in our country. The first part of the story should talk about their glamour, and quick rise to power and fame. The second part should talk in detail about their fall from grace.

It will help so many women from falling into the wrong trap.

The interview with Partho Sarothi Ray brought out a number of convincing points on various aspects of Covid-19 (‘The August 15 deadline is a gimmick’, July 19). The questions were sharp, and the answers to the point. Handling a pandemic of such a nature is difficult, and whatever steps the government is taking should be deemed right.

However, Ray has clearly pointed out several lapses in the policies pursued so far, and has suggested ways to deal with the problems more meaningfully. Perhaps, the worst is yet to come, and the points made by Ray should be taken seriously while considering future policies.

It was interesting to note that schools in Thailand have introduced partitions made from ballot boxes as part of social distancing measures (‘The big picture’, July 12). This is something that India can emulate when schools reopen.

There should be at least five feet distance between each student, and not all need to come to class, every day, at the same time.

More importantly, there should be a considerable depletion in the course load for each subject, as that will ease the burden on students. It is only in India that we have so many things to study. Most of us end up doing things we have hardly studied during school days.