'I chronicle what I have learnt in my life': Tamil filmmaker Pa Ranjith

Through 7 films in 10 years, he has redefined Tamil cinema 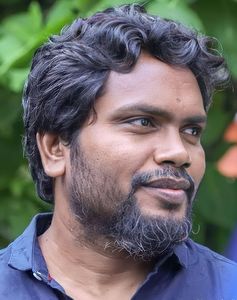 Acasually dressed Pa Ranjith sits on the sofa in a swanky hotel room. A copy of Benyamin’s book Goat Days, depicting the life of an Indian emigrant who goes missing in Saudi Arabia, lies on the table. Ranjith’s talk is liberally strewn with quotes by the likes of Periyar, B.R. Ambedkar and Karl Marx, which is unsurprising as he is following in their footsteps as a voice for the voiceless.

Though an Ambedkarite, Ranjith is particular that his films should not be categorised as “dalit films”. Despite this, he has emerged as the dalit voice in Tamil cinema.

In a career spanning a decade, Ranjith Pandurangan, 39, has directed only seven films, but through them, he has redefined Tamil cinema. His fiery statements about the deep-rooted caste system in the country have brought dalit culture and anti-caste politics to the centre-stage of mainstream cinema. “I chronicle what I have learnt in my life,” Ranjith tells THE WEEK, as he gets ready to head to Cuddapah for his next project, Thangalaan, with actor Chiyaan Vikram.

In his childhood, cinema used to be a celebration. Only rarely would his father take him and his brothers to cinema theatres. They would go to the tentkottai or the hut-like theatres, sit on the mud floor and watch the movies while relishing the snacks that their mother would have brought along. “It was like a festival for me in those days,” says Ranjith. “I never dreamt of getting into cinema in future. I did not have big goals then.”

It was his quest to find answers for several unanswered questions that turned him into the fiery filmmaker that he is today. When he was young, he was obsessed with finding out why he lived such an oppressed life. Why could he not sit under the lone banyan tree in his village like his classmates? Why could he not buy chocolates in the shop run by an upper-caste person? Why was he not allowed to sit next to his own classmates outside school? While his two brothers were not bothered by such questions, Ranjith was always on a quest for the answers. And when he went to study at the Fine Arts College in Chennai, he was still looking for answers. Upon graduation, his ambition was to become a painter. He did not know much about mainstream cinema. It was the few film festivals and screenings he attended at Alliance Francaise and Film Chamber in Chennai that changed his perception about cinema. He understood how he could use it as a tool to express his views through films like Shivaji Ganesan’s Parasakthi (1952), Life is Beautiful (1997) and Children of Heaven (1997).

Ranjith uses various techniques like characterisation, language and even colours to tell his stories. His debut film, Attakathi (2012), is a light-hearted romantic comedy. Though the film was not commercially successful, it was critically acclaimed for its realistic treatment, dialogues and screenplay, and for portraying assertive dalit characters for the first time in Tamil cinema. His second film, Madras (2014), was one of the first Kollywood films to talk about how politics was intertwined in the lives of the people in north Madras. The main element in the film was a wall claimed by two political parties. His next two films, Kabali (2016) and Kaala (2018), with Rajinikanth in the lead, talked about oppression and land rights. While Kabali was about a gang war between two groups, Kaala told the story of a Tamilian fighting land grab in Mumbai’s Dharavi. Both films hit it big, with Kabali grossing Rs650 crore in the box office. Ranjith established Rajinikanth as a dalit icon. His next, Sarpatta Paramparai (2021), was a super-hit, which interwove sports, politics and lives of the oppressed in north Madras. In his anthology film Dhammam (2022), he dealt with politics, conflict and resolution. Dhammam, although violent, uses violence as self-defence.

He explores the politics of love in his critically acclaimed Natchathiram Nagargirthadhu (2022), set in Puducherry. Its representation of queer love did make certain viewers uncomfortable, but it was a bold stab at inclusive cinema, incorporating a diverse set of voices and gender perspectives. “I only brought to the screen what is happening in reality, in our day-to-day lives,” he says. “Most of us don’t look at certain things from the perspective of the protagonist.” The places in which his stories are set are intricately woven into the plot and screenplay. As a person who hails from Karapakkam near Avadi, Ranjith was always concerned about how north Madras was portrayed in Tamil cinema.

His Neelam Productions has produced some of the most acclaimed films in the recent past, like Pariyerum Perumal (2018), Irandam Ulaga Porin Kadaisi Gundu (2019), Writer (2021), Kuthiraivaal (2021) and Seththuman (2020). Ranjith launched award-winning directors like Mari Selvaraj and singers like Arivu through his production house. His Neelam Cultural Centre is another brave attempt at bringing dalit issues to the forefront. It explains the intricacies of dalit culture, disseminates knowledge and educates people to fight and overcome oppression. The centre’s night schools at various villages in rural Tamil Nadu are opening education to the lower strata of society. But Ranjith’s first love will always be cinema. He is one of the first to perfect the formula for combining activism and entertainment. When done right, he knows its explosive power to bring change.