Review: Bridgerton Season 2 is less playful and more intense than the first

The passion is plausible for the most part 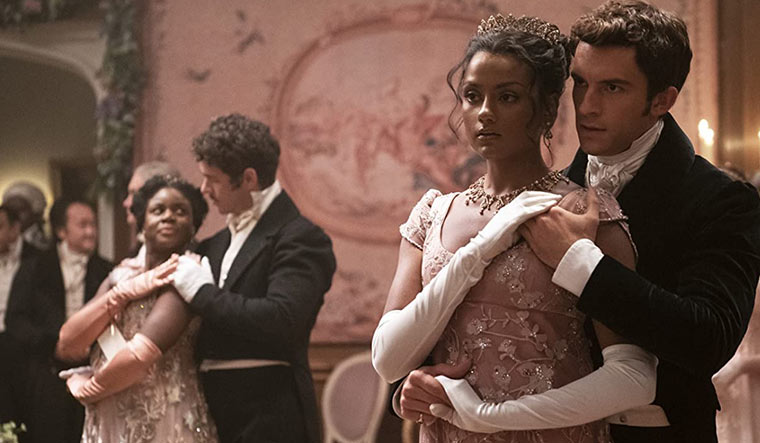 After the first season of Netflix’s regency romance, Bridgerton, became a runaway success, there was much expectation riding on season two. Remarkably, it lives up to it, mainly because it does not attempt to copy the success formula of the first. Comparing the two seasons might not do justice to either because, beyond the bustles and the balls, the corsets and the chaises, the vicissitudes of the ton and the eccentricities of the queen, they do not have much in common. One could say that the second season is less racy and frothy than the first. The desire is hidden and forbidden, paving the way for the torture, the longing looks, the magnetic pull and the inability to stay away from each other—pure gold for a true romance lover.

The enemies-to-lovers trope, fortunately, does not prove to be the quicksand on which so many romances have sunk. Instead, it is only the starting point. Kate Sharma (Simone Ashley) is determined to keep her younger sister, Edwina (Charitra Chandran) away from the rakish Lord Anthony Bridgerton (Jonathan Bailey), the viscount who is the elder brother of last season’s heroine, Daphne. Kate overhears him saying he only wants a wife to breed children and carry on the family name, and she wants better for her sister. Anthony—after interviewing a series of women who turn out to be nothing more than pretty airheads unsuitable for breeding purposes—decides on Edwina to be his prospective wife. Even as he fixes his attention on the younger sister, he finds himself fixated on the elder one, who is considered to be practically a spinster at the ripe old age of 26. Kate is determined to do everything in her power to keep her sister away from the vile viscount, but the question is, will she be able to keep herself away? Sparks fly, egos clash and verbal jibes are traded. After all, everyone knows that war, more than love, is fertile terrain for romance to bloom.

Unlike many regency heroes, Anthony is more than a dandy whose life’s essence consists of ensuring his cravat is knotted properly. He is plagued by a sense of familial duty and determined to fulfil his obligations as the head of the manor. That might have made him boring, but thankfully, the brooding and burdened vibe works for him. It just makes his attraction to Kate even more magnetic. He has none of the levity of the first season’s hero, the Duke of Hastings, but that is not necessarily a bad thing. It does, however, make the show less playful and more intense.

Most of the subplots ably aid the main narrative—especially that of Penelope Featherington’s unrequited love for Anthony’s brother, Colin; his sister Eloise’s budding feminism; and the endearing relationship between Kate and Edwina. In fact, Edwina’s coming out from under Kate’s shadow with a withering salvo aimed at her sister and suitor is one of the headiest moments in the series. At places, the show feels a little stretched. After all, for how long can you keep a couple who is desperately in love with each other to keep from realising that they are desperately in love with each other? Towards the end, you are ready to pull out your wig (in regency parlance) if you hear the word ‘duty’ one more time. Other than this, the passion is plausible for the most part. There is even a shirtless Mr Darcy moment thrown in for good measure, when it is not just Kate who wishes she had her smelling salts to keep from swooning.