Prime minister Jawaharlal Nehru left an indelible mark on the country’s polity, defining the contours of its political, economic, social and cultural life. Nehruvian discourse became the dominant discourse of post-independent India. An antithesis to this was also developing, with the birth of the Jana Sangh and expansion of its ideological fountainhead—the RSS.

With the RSS set to celebrate its 100th year in 2025, and the BJP, which evolved from the Jana Sangh, too, crossing the 40-year mark, effort is on to present an indigenous ideology rooted in Indian tradition and suited for modern India, which often gets classified as hindutva. The Indian right is looking for icons and philosophy that it can use to argue against the other dominant streams.

RSS leader Ram Madhav in his new book The Hindutva Paradigm presents ideologue Deen Dayal Upadhyaya’s philosophy of integral humanism as a non-western ideology for the country. An RSS pracharak, Upadhyaya was one of the guiding spirits of Jana Sangh. His philosophy of integral humanism, enumerated through four lectures to the Jana Sangh cadre in 1965, is often invoked by RSS and BJP leaders to talk about welfare, economic model and cultural nationalism.

Madhav has produced an exhaustive work contextualising Upadhyaya’s doctrine which, he says, should be used to govern India. He has presented Upadhyaya’s critique of major philosophies that originated outside India, be it socialism, capitalism or communism. Upadhyaya argued that these ideologies were not suited for a country with such diversity and rich cultural past. Madhav says India’s past provides an answer to the limitations of multiculturalism and assimilation. In the saffron ecosystem, the ever-changing economic model has often confounded its followers. Jana Sangh founder Syama Prasad Mookerjee’s consistent opposition to Nehruvian socialism earned the Jana Sangh a sobriquet ‘Brahmin-Bania party’. Later, the BJP, in its constitution, talked about adherence to Gandhian socialism, which was later changed to Gandhian approach to socioeconomic reasons.

Madhav writes that Upadhyaya’s integral humanism and economic thought can be summarised in one word—antyodaya, which means upliftment of the last man. ‘Antyodaya’ and ‘Atmanirbhar Bharat’ are oft-repeated phrases by Modi’s ministers and BJP leaders. Upadhyaya’s views on swadeshi and decentralisation remain valid even today, says Madhav.

The book serves as a key addition to the debate on hindutva and what it represents. 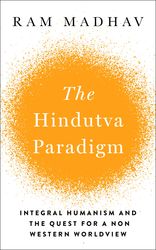 The Hindutva Paradigm: Integral Humanism and the Quest for a Non Western Worldview