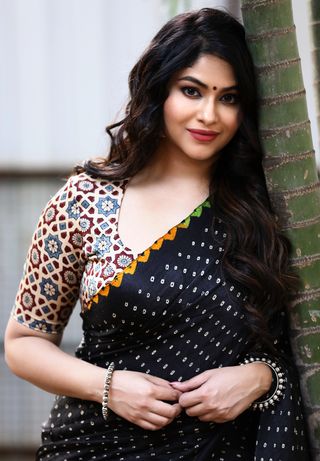 Indian-American actor-director Lakshmi Devy, currently settled in New York, is living the dream. She recently won the prestigious Gold Remi award for direction at the 54th WorldFest-Houston International Film Festival for her film, When The Music Changes, which she wrote, directed and produced. She also plays the protagonist in the film, a girl who is the victim of her boyfriend’s bruised ego. Past winners of the Gold Remi include Steven Spielberg, George Lucas, the Coen Brothers and Ang Lee. In an exclusive interview with THE WEEK, Devy, who is also a doctor, talks about what it felt like to win the award and the challenges she faced while filming the central rape scene. Excerpts:

Q\ How does it feel to win the Gold Remi award?

A\ It was very unexpected. I had a certain hope that it would do well in festivals, but I never really thought that I would get a Gold Remi. I am really grateful. I come from a different line of work. I did not pursue films when I was 16 years old. I went to medical school. When you get an award like this, it helps reaffirm your faith that you are on the right path.

Q\ Some may argue that India is depicted in a poor light in When the Music Changes, concerning issues like pollution and women’s safety.

A\ My movie does not intend to show India in a bad light. It just shows what we do. There is no such thing as portrayal. If you are intelligent and can see things as they are, watch the movie and think about it. I am not asking you to ape the west. I am just asking you not to hurt your women. I am an Indian and if I don’t talk about it, then who will? The American side of my mentality is what makes me talk about it. But the Indian side is the one that observes all this, gets hurt and wants to do something about it.

Q\ Did you have an emotional hangover after playing the rape victim?

A\ I did not have an emotional hangover after doing the scene. Though watching it repeatedly during the edit was kind of harsh. I did not really realise in the beginning how stressed I was going to get. Then later on, I realised I was breaking out in hives and getting a rash because of the subconscious levels of stress. So, I had to take antihistamines and buck up and prep for the shoot. I guess I had a very visceral reaction to the stress that I was going to undergo.

Q\ Filming a rape scene can be a challenging and harrowing experience. How did you deal with it?

A\ I knew it would be something really raw and disturbing on the screen. The entire scene was taken in one single shot. While rehearsing the rape scene, I did not want the boys to get used to touching me. It had to be raw enough like touching a new body. It was a physically draining scene. We shot it twice. That is all we could actually pull off. For the boys, too, it was mentally scarring. There is a lot of physical violence involved. It was hard for them to get into that mind-set. I had to counsel them a lot. We had one actor who walked out. On the day of the shoot, he said he could not do it.

Being in control of the set was a huge advantage. I did not have to worry about how much they were going to show. My film shows how patriarchy plays out in our everyday lives, especially our love lives. Back in the day, patriarchy was the way of the world. It was black and white. Now it is covered in a whole bubble of hypocrisy. “What do girls not have now?” is the new slogan. They make it seem like you have freedom. Like you can think or do things for yourself. But we all know that is not true.

Q\ Tell us about your upcoming projects.