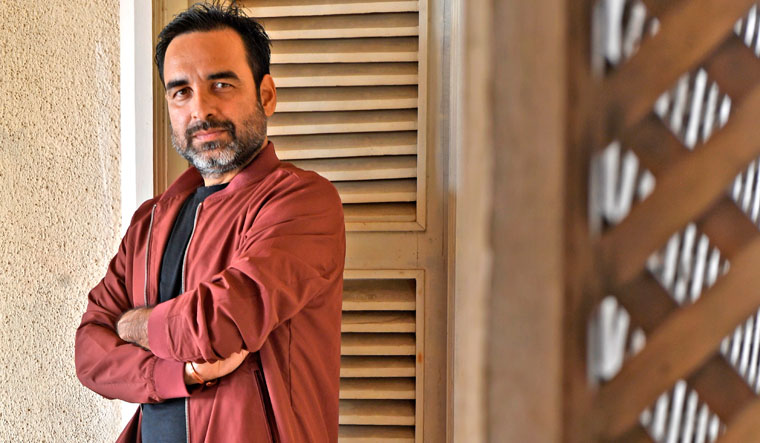 The first time Pankaj Tripathi saw a professional camera in operation was on the set of Kannada film Chigurida Kanasu (2003). The 26-year-old National School of Drama (NSD) graduate played a cameo as the hero's friend. A year later, he came to Mumbai with his wife, Mridula, looking for work. In an industry where everyone has a story of struggle to offer, Tripathi talks about his with wit and wordplay, acknowledging fortunate strokes of serendipity.

Upon arriving in Mumbai, he noticed that “the doors to the Who's Who would not open easily”. So, Tripathi formulated what he calls his “ingenious access trope”. He would gently tell the security guard outside a studio that he had been sent in by “Ishwarji” to meet the assistant director. Soon the trick started working. While conversing with the person that he got to meet, if he is asked who Ishwarji was, Tripathi would smile and point up, saying that he was referring to God. With an unwavering belief in his craft and a strong determination to succeed, Tripathi made inroads as an outsider.

Ever since he played Sultan in Anurag Kashyap's Gangs of Wasseypur (2013), after “hanging around with nothing for nearly a decade”, Tripathi has gone on to become a celebrated actor. In 2020, he had five releases including the second season of Amazon Prime Video’s crime saga Mirzapur. The first season brought him unprecedented fame as Kaleen Bhaiya. This year looks even more promising with the scheduled releases of 83, Bunty Aur Babli 2 and Laal Singh Chaddha.

In the last 10 years alone, Tripathi has appeared in 70 films and TV shows. Besides his fans, memers love him, too. Be it as Kaleen Bhaiya or Sattu Bhaiya (from Ludo), he is a regular in GIFs, memes and reaction videos across social media. “Because of OTT service, I have been able to consolidate my reach within India and overseas, which would not have been possible through mainstream cinema,” he says.

This year, when Tripathi visited his hometown of Belsand, Bihar, a large crowd of children gathered outside his house. “After I took a few pictures with them, my parents asked if I had become an important government officer for the crowd to come ask me for favours,” he says. “I told them I was an actor, but it does not really [mean much to them]. My father simply asked me to ensure I did not bring in crowds again.” His father wanted him to be a doctor but did not object to him taking up acting either, given that the boy displayed an “undying” passion for performance. When he was 14, Pankaj played a woman in a village skit, danced to a Naagin song and donned many other roles during festivals.

“Acting keeps me alive. I think it is the only thing I know how to do and when you are good at something, you are bound to be successful,” says the 44-year-old. He is quick to admit that his initial motivation to be an actor was “the money, the free travel to exotic locales and paid flight tickets”. “It was only after Newton (2017) that I felt a sense of security that comes with knowing that you will not have to sit at home or be jobless anymore. It was unlike anything I had experienced in a long time.” And now, he says he has so much work that he yearns for the luxury of doing nothing.”

It was on one of his off days that THE WEEK met Tripathi, just after he was done with a sunbathing session on the terrace of his 12th floor apartment. It is striking to see him in his chiselled, metrosexual avatar up-close, given that his on-screen characters have always been anything but the stereotypical Bollywood hero. “Arey, I am young and happening only. It is just that these guys make me look much older on-screen,” he says with a grin. For the photoshoot in the landscaped garden of his housing complex, Pankaj does exactly as he is told, occasionally adding his own improvisation. “I am an out-and-out director's actor, tirelessly trying to deliver exactly what is expected of me.” 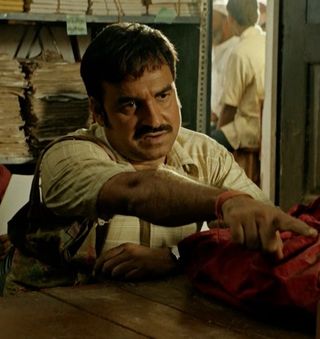 Owning the screen: A still from Kaagaz

Actor-director Satish Kaushik, Tripathi’s friend from NSD and director of Kaagaz, which released earlier this year, vouches for his “astute talent and kindness”. “While we were shooting for Kaagaz, Pankaj got so friendly with the villagers that he would discuss their issues,” says Kaushik. “Whenever there was a break between shots, he would rest on a charpai and use his gamcha as a pillow. I could see Bharat Lal (Tripathi’s character) in him. My fondest memory from the sets will be of him as a great cook. He makes amazing vegetable stew.”

Mridula concurs. “He is more domestic than my daughter and me,” she says. “He taught me how to cook after our wedding. It helped immensely, especially during his time of struggle, when he would be at home and I was working as a teacher. He is extremely chatty, very good at telling stories and the most talkative among the three of us.” Mridula was in class nine and Pankaj was two years older when the two first met; they dated for 11 years before tying the knot.

There were times when months went by without work and years without any new releases. But the bright side of it was that he got to run daily errands for the house and go grocery shopping with Mridula, the couple’s favourite pastime. “Now, doing that is difficult because even the sabjiwala knows me and texts me on WhatsApp. He recently advised me on the length of my beard for the next season of Mirzapur,” says Tripathi, with a hearty laugh.

The couple admits to consciously keeping a “close and limited circle of friends”, both before and after Tripathi’s rise to fame. “He still knows exactly where what is kept in the house, and we still continue to fight just the same. We are total opposites, yet, the love has only been growing with each passing day." Pankaj is a doting father to their teenage daughter Aashi, "constantly sending her reminders to drink water and have enough fibre."

During our interaction, Pankaj steers the conversation from films to literature to world history to culinary schools. His punny one-liners keep the mood lively. With his rich body of work, I cannot resist asking him if he ever regretted doing certain films for which he had been paid handsomely. “Of course! But it made my bank account happy, na? That is enough,” he says. Gurgaon is an example of one such film that did not work out with the masses. “I knew that Gurgaon would be appreciated by only a certain kind of audience. Critics loved it and as far as the producers recovered the money invested, I am okay.”

Three aspects essentially sum up Tripathi's enviable success story—first, his interactive and grounded style of acting which instantly connects with the audience; second, his captivating and unmissable on-screen charisma which lends his characters a life of their own; the third is his idiosyncrasy for impromptu, last-minute revisions to a script, which lends it a “unique Pankaj Tripathi masala”.

“His ingenious one-liners are killer,” says his Mirzapur co-star Rasika Dugal. “Both of us are alike in that we both want to rush home as soon as the shoot is over. Neither of us has the slightest interest in the after-hours.”

Tripathi says that with almost every film, he writes his own one-liners. “I read the script and then ask the director if I can tweak it to retain the meaning but deliver it in my own words,” he says. “Over time, I have been able to develop it as my signature style. This way, I can use my sense of humour to make my characters gripping and juicy.” His favourite line is a scene from the show Criminal Justice when he gives his on-screen wife a bouquet of flowers and she asks, “Yeh kya hai?” (What is this?) He replies: “Yeh kasuri methi (fenugreek) hai.” “I was supposed to say, ‘Yeh bouquet hai’, but I changed it during the shot,” says Tripathi.

The only way that stardom has helped him is that it has taken away the “headache of EMIs”. “Ten years ago, when I wanted the media and people to talk about me, they never did,” he says. “My journey is one of hope and inspiration for the millions out there who must believe that nothing is impossible.” But he adds a line of caution: “Cast, typecast, outcast: this is the circle of life for an actor. Once, you know this, you know it all.”