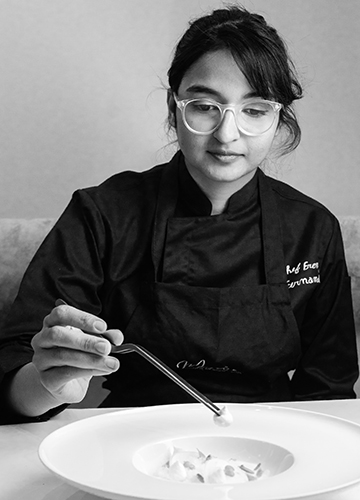 Chef Freny Fernandes has worked with multiple Michelin star restaurants. She made the desserts for Priyanka Chopra Jonas’s bridal shower. And now she has come up with India’s first contemporary dessert bar and bistro, Moner (a portmanteau of her parents’ names), which will dish out gourmet desserts in three and five courses. Think vegan Pavlova with fresh seasonal fruits, floating meringue on crème anglaise and traditional apple tarte tatin.

Q\ Why did you come up with a dessert bar and when did you visit your first one?

A\ After having lived in New York and travelled to other parts of the world, I realised that all the big cities like New York, London and Singapore had plenty of dessert bars, but my city, Mumbai, still did not have one. That is when I decided to open a dessert bar, to share my knowledge and experience from the Culinary Institute of America (CIA) and the places that I have worked at. My first dessert bar experience was in New York, at the ChikaLicious dessert bar. But the place that [truly impacted me] was Noma. While at Noma, we would constantly interact with guests; that is something that I felt was truly missing in all of my years working at other places in New York.

Q\ What are some of your new ideas and approaches to baking and dessert-making?

A\ The whole concept of a bistro turning into a dessert bar in the evening is, I think, very different. Plated desserts are not given as much importance in restaurants. Usually, it is just something basic and not well thought of, complementary to the main savoury food instead of being something exclusive. My desserts are not your usual chocolate cake and cheesecake. Anything I do is either my take on a classic or a different idea altogether. I like to bring together multiple flavours and textures. I believe there is a lot of complexity in simplicity, and although aesthetically my style is minimalistic, a lot is going on in each dessert in terms of flavour and technique.

Q\ What are some of the offerings at Moner which will not be found anywhere else in India?

A\ Moner’s focus is solely on desserts; we offer plated desserts in three and five courses along with tea, coffee and beverage pairings with each course. The five-course menu is designed in such a way that it is not too heavy. We start with an amuse-bouche or a palate cleanser, then move up in terms of heaviness and finish with my show-stopper—Jardin du Rose. The plated desserts and the petit gateaux are all creations straight out of my head. Every creation takes months to conceptualise and put together.