After having rolled out Aadhaar successfully, Ram Sevak Sharma, the first director general of the unique identification project, moved on to join the Jharkhand government as chief secretary in March 2013. He looked forward to a post-retirement life in Ranchi. However, he was back in Delhi in May 2014 as secretary of the department of electronics and information technology, which coincided with a change of guard at the Centre. In his book, The Making of Aadhaar, Sharma notes that the BJP’s victory was the direst existential threat to Aadhaar as the party had promised to review the programme in its manifesto.

Minister in-charge Ravi Shankar Prasad’s angry response to a meeting Sharma called on Aadhaar only strengthened his fears. However, at a review meeting Narendra Modi had with various departments, Sharma got to wax lyrical about the need for Aadhaar for an attendance system that the prime minister wanted. It was a ray of hope for Aadhaar’s survival.

Sharma’s book is the most authoritative account of the Aadhaar journey, documenting the scrappy beginnings, internal turmoil, constant improvisation, opposition, legal challenges and the ever-expanding use of the unique ID.

Sharma recounts how in the beginning it was only him and UIDAI chairman Nandan Nilekani sharing a room in the Planning Commission building, going around like “salespersons” making presentations to government departments. Sharma’s experience as a bureaucrat helped the project get over governmental impediments.

Sharma gives a frank account of the clash between those who joined from the private sector and the officers from the administrative services. “These fissures disturbed me. Nandan had also expressed his disappointment.... [The] good thing was, we never took sides,” he writes. He also admits that the absence of a law backing UIDAI became a debilitating factor for Aadhaar.

He also writes about his decision to post his Aadhaar number on Twitter to prove there were no privacy concerns. “Of course, when the hackers tried to show they could cause me some harm, I did take a few precautionary steps,” writes Sharma. “For example, I changed my passwords and hardened them on my back accounts, social media accounts and email accounts.” 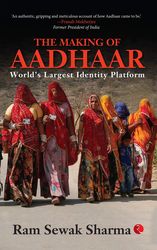