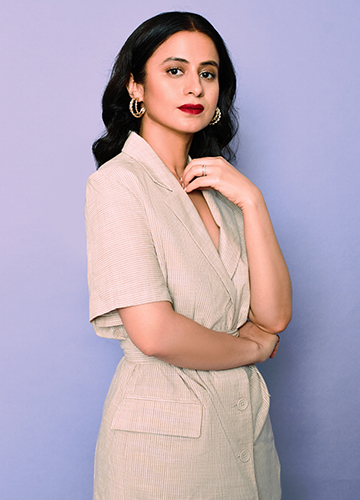 Rasika Dugal has been busy exploring filmmaking during the lockdown, even making a short film with husband and actor Mukul Chadda. With two web series—Mirzapur S2 and A Suitable Boy—releasing on October 23, Dugal says she is relishing the roles she gets.

Q\ A Suitable Boy happens to be your first film with Mira Nair.

A\ A Suitable Boy is a very charming film with an interesting cast of artists from around the world. To work with Mira was my dream. This is a story of a country coming into its own as seen from the lives of four large families. I play Savita Mehra Kapoor, whose marriage leads to a turn of events among the families. With Mira, each character and actor receives due attention and that is the beauty of it all.

Q\ Why did you agree to do A Suitable Boy?

A\ The main reason was Mira Nair. The second reason was, of course, the [the book], which I think is a brilliant piece of literature. Also, I really feel comfortable and happy portraying characters from that era. Sometimes, I feel I belong to the 1940-50 era. I deliberately played the role of Safia in Nandita Das’s Manto. I really feel I have a connection with that time. It is unfortunate that the film resonates with today’s India, given the kind of polarisation in society today.

Q\ You have always experimented with roles and platforms.

A\ There is so much content available now and an abundance of work. These are exciting times to be an actor. The streaming platforms offer variety and quality and the audience is now embracing it. I have been a part of different forms of cinema, right from indie to mainstream and more.

Q\ Both, Mirzapur S2 and A Suitable Boy are releasing on the same day. How does it feel?

A\ I am thrilled! Two completely different characters for me! I loved revisiting Beena Tripathi for Mirzapur and loved discovering Savita Mehra for A Suitable Boy—both in a matter of a few months.

Q\ You and your husband, Mukul Chadda, did a short film during the lockdown.

A\ Yes, we shot Banana Bread over two days with our phone cameras. It is on YouTube and it was our way of responding to the grim scenario in which we all found ourselves in. We tried to cover both, the economic and the health situation.