In the pandemic, home chefs have become a force to reckon with 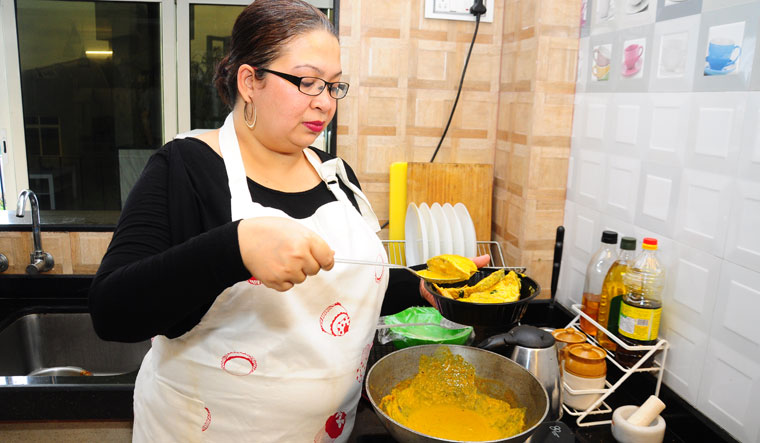 Lady and the ladle: Roshni Nathan started ‘Kitchen Table’ in Hyderabad in July. She does not serve regular Telugu food, and instead takes inspiration from her trips to Mumbai and Goa | P. Prasad

At almost 90, Krishna Sekhri, aka Krishna aunty, is easily the most popular resident of her leafy, green colony in Delhi. With a shock of white hair, a ready smile and free advice on anything from children to food, she is often spotted in the colony walking her Labrador. “Half my life has been spent sitting on the park bench opposite my house,” she says with a smile. There, Krishna aunty often used to sing to a smitten audience. The lockdown brought her life to a halt, until her family realised it was time for an intervention. It came in the form of her other passion—food. At ‘Aunty K’s Kitchen’, Punjabi recipes are brought alive with a dollop of warmth. The kitchen opens every weekend and sells out within minutes of the menu being put up on the colony’s WhatsApp group. “I do simple, slow cooking,” she says. “It is wonderful that people like it.”

Cooking is part of her DNA. Hailing from a large family, her mother would cook for everyone, including the seven dogs. Her food was the stuff of legend. “Even the tinda (Indian round gourd) tasted like mutton,” Krishna aunty reminisces fondly. “My father’s friends who stayed at the best hotels in Lahore always ate dinner at our house.” Krishna aunty herself, however, only learnt to cook after her marriage to an IFS officer. In the lockdown, she has brushed up her old skills. She spends her time reading cook books and planning the menu for the weekend. Now her palak chicken, parathas, chola, butter chicken and pickles have become as legendary as her mother’s dishes. 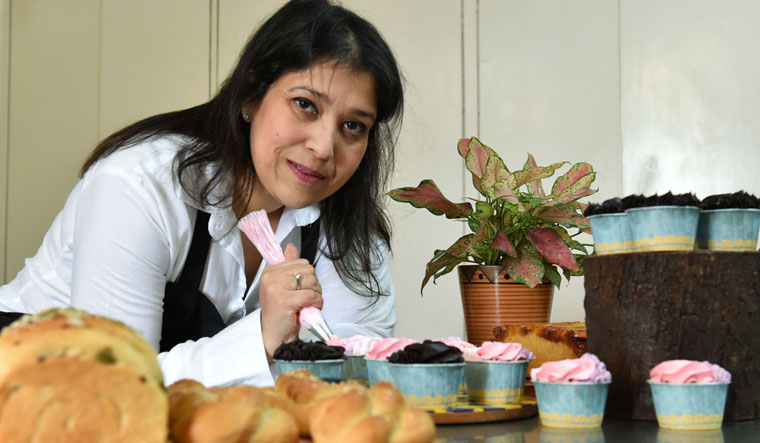 It is not just Krishna aunty. In the pandemic, the home chef business is booming like never before. Whether it is the Mumbai-based quartet selling burgers through ‘The Accidental Burger House’, or the chef behind ‘Mehfil Delhi’ who is introducing Delhiites to Kashmiri cuisine, or the ‘Curly Sue’ pork being sold by a couple in Bengaluru, home chefs have mushroomed across the country, quickly filling the gap left by people’s reluctance to dine out. It is generally perceived that food prepared by home chefs in small, curated batches is healthier and safer.

Some of these home chefs are infusing novelty and freshness into their offering. In July, Roshni and Errol Nathan started ‘Kitchen Table’ in Hyderabad. The couple does not serve the usual Telugu and Hyderabadi fare, though. Roshni takes inspiration from her travels in Goa and Mumbai, coming up with popular dishes like Goan prawn curry and green masala chicken. “We have lived in Hyderabad for the last 16 or so years,” she says. “Though people want to try new food, it is difficult to get it in the city. The number of people going to Goa from Hyderabad has increased. They cannot go there all the time so we thought of coming up with niche Goan food.” Her cooking has also been influenced by her Anglo-Indian in-laws in Mumbai. The Anglo-Indian East India Bottle Masala, for example, which includes 30 to 35 spices, is used in several of her dishes. 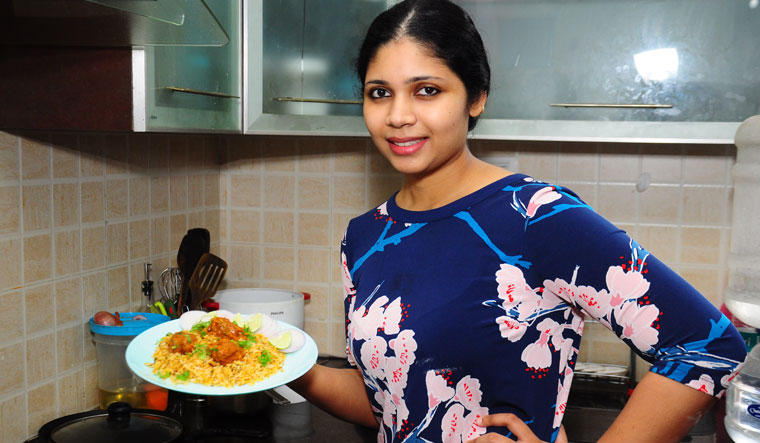 The specialty of Namratha Mongam, a home chef from Vizag, is heritage recipes and rare techniques. Namratha is inspired by her family’s grand history, which includes a letter of appreciation from Queen Elizabeth II. Her husband’s Malayali Christian family, too, is equally interesting, having preserved centuries-old recipes passed down through the generations. “There are fantastic cooks on both sides. I asked our families to share important recipes,” says Namratha, who started ‘Ma Vantillu’ (My Kitchen), specialising in coastal Andhra and Kerala food. She only realised how popular the venture had gotten during the Kerala festival of Onam, when they prepared sadyas (traditional Onam feasts) with 26 curries. “I was surprised to get 100 orders that day,” she says. There is great demand for her crab masala, Kerala chicken curry and appam and stew. To complement her recipes, she uses fresh vetted ales, mostly sourced from her farm on the outskirts of the city. Aside from the financial aspect, merely being able to serve good food is reason enough to continue as a home chef, she says.

In the pandemic, anything perceived to be healthy is an instant best-seller. Like the gond laddoos of Monika Khandelwal, a Rajasthani home chef living in Hyderabad, which are believed to be highly nutritious with healing powers. Although she makes only one kilo every day, the demand for them is much higher. “I made the laddoos for a person in my complex after seeing a request in the community group,” she says. “After that, I started getting a lot of requests.” According to her, the laddoos are made in an authentic style with jaggery, unlike the ones you get in shops made with sugar.

Many of these home chefs publicise their food through Instagram or WhatsApp. Mumbai-based Sonal Garga and her son, Vimanyu, for example, started out by offering fresh, cheesy pizzas through their housing society’s WhatsApp group. Sonal says she figured pizza would be one item that those who chose not to dine out would miss the most. “Today, we deliver customised food as per choice and taste,” she says. This includes sizzlers, cakes and a variety of starters. All she requests is a 24-hour notice to get the ingredients. She says she makes around 040,000 a month. 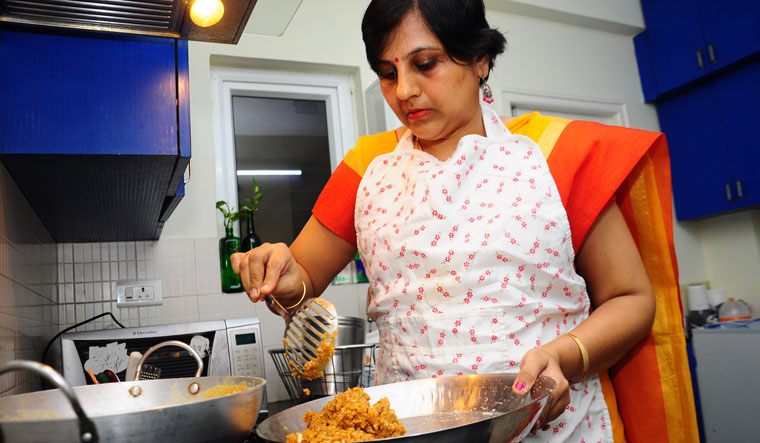 The home chef business has become so successful that many ancillary enterprises have come up around it. Like the platforms which connect home chefs with customers. These include Zingg and Assorted in Delhi and Trice in Hyderabad. “There are a couple of reasons why home chefs are much in demand,” says Priyanka Raghuraman, co-founder of Trice, which has enlisted home chefs from 55 communities. “First, they offer authentic dishes that are rarely available in restaurants and cloud kitchens. Second, they make the dishes in their own kitchens with the same ingredients they use to cook for their families. In a way, they are inviting you into their homes.”

Home chefs who established themselves much before the pandemic are adjusting their modus operandi to cater to the new reality. Like Monica Kansal Gupta, a Delhi-based home baker with her own brand, ‘It’s Sinful’, who lost many big orders from her corporate clientele after events got cancelled in the lockdown. However, as the unlock phases began, she started getting queries for small parties. “Earlier, I used to make 18kg to 25kg cakes. Now the parties are in smaller groups, so the orders are for 1kg to 2kg cakes,” she says. The nature of her catering, too, has changed, with orders for artisan breads and baked savouries like tortillas, quiches, burgers, puffs and pizzas increasing. These were items people would earlier source from fast food joints, but are now wary. Over the last three months, she has catered for around 18 parties. Business is different now, she says, but it continues to go strong.