The girl on the train 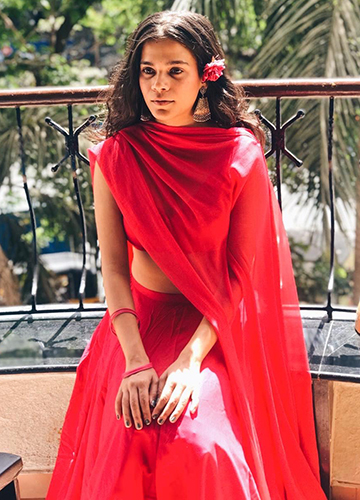 Srishti Shrivastava’s first brush with fame was while commuting on the Mumbai local. “Hey, Girliyapa!” yelled someone, referencing her character on The Viral Fever’s show. It was 2017, and those around her barely acknowledged her. Flash forward to 2019, when a fellow commuter yelled, “Hey, that’s Albina from Gully Boy!” and more people took note of her. There is no commuting right now because of the lockdown, but the acknowledgment is pouring in in different ways. Particularly after Shrivastava made a bold appearance in Amazon Prime Video’s recent offering, Gulabo Sitabo.

A day after the film’s release, Shrivastava sounds chirpy on the phone. She is delighted that the reviews have praised her performance, though they have been somewhat critical of the film. Shrivastava’s Guddo, in the Shoojit Sircar film written by Juhi Chaturvedi, is a firebrand with chutzpah. The film is set in Lucknow, and Guddo is semi-orphaned, uninhibited and outspoken—someone who would not hesitate to give her elder brother (played by Ayushmann Khurrana) a dressing-down. These bold qualities are evident in her own voice and most of her other work as well. “When I auditioned for it, I had an idea of what the character was,” said Shrivastava. “She is a rockstar. She is so comfortable in her skin. I love that about her.”

Auditions are the only way for new actors to make inroads in the industry. Over the last five years, Shrivastava has auditioned for “a lot of web series, advertisements and films”. She lucked out when casting director Jogi Mallang’s team called her to audition for a Sircar film. The brief mentioned that her character, Guddo, would be “chill and muhfat (blunt)”. Her first question was: “Is she an important character?” She said: “I asked that very selfishly. And, the girl on the call said, ‘She is the only girl.’” Only during the audition did Shrivastava find out that Amitabh Bachchan and Khurrana were headlining the film. But she was assured of an important role.

Guddo is an addition to the growing list of characters that break the on-screen stereotype of small-town women being coy, shy and dim. In an interview with Film Companion, Sircar mentioned that he wanted Guddo to be the head of the family. He wanted her to be liberal in terms of her sexuality, and praised the writing. “It’s her body, her life, her choice,” he said.

Shrivastava captures Guddo’s emotions beautifully. But her encounter with diverse women characters of strength and resolve began early on. In her first theatre play, 07/07/07, directed by Faezeh Jalali, Shrivastava is one of the actors playing the lead role of Reyhaneh Jabbar, the Iranian woman who was imprisoned for stabbing her rapist. Then, playing Amba and Draupadi in Shikhandi, also directed by Jalali, Shrivastava confronts the notions of maleness, femaleness and everything in-between. Manav Kaul’s Chuhal, a love story, sees her as a nonconformist questioning the idea of marriage. It is, however, the Girliyapa videos, with its quirky stories of everyday women, that shot her to stardom. And then, there was a cameo appearance in Gully Boy as Albina Dadarkar, whom Alia Bhatt fights on-screen.

But reaching this stage has taken time. Her response to the difficulties on the road to achieving her acting dreams is not one of frustration. But it is not oblivious of the realities of it either. “We go through a lot of rejection,” said Shrivastava. “I have not been selected for [many] ads either. I have done just three ads, having worked for more than four years.” With time, she learnt that too many factors influence the selection process. “Your face, whether you look the character or not, the number of followers you have [on social media], all these influence a director’s choice at times,” she said. She used to cry a lot, but has now accepted it as the reality of the business. 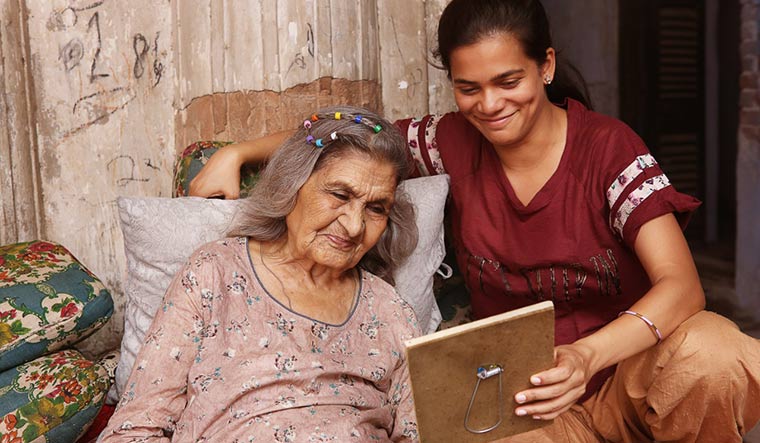 In the big league now: Shrivastava with Farrukh Jaffar in Gulabo Sitabo.

Born to parents from Uttar Pradesh, Shrivastava grew up in Mumbai and spent four years in Indonesia, where her father works. Her tryst with performance began fairly early. The dreamy-eyed child wanted to become a “heroine”. “Just that belonging to a middle-class family, we didn’t know how to go about it,” she said with a laugh. Her supportive parents, gauging her interests, enrolled her in Bharatanatyam classes when she was four. They also took her to auditions for TV commercials.

She did an ad for Amul ice-cream. She also auditioned for the role of Frooty in the popular TV show Son Pari, but did not get it. That was the end of her acting dream as a child. Her parents wanted her to complete her education before resuming acting. But dance continued. In her years in Indonesia, she also trained in Javanese dance. It was later, while studying mass media in Mumbai, that she started out in dramatics. She would go on to join The Drama School Mumbai. 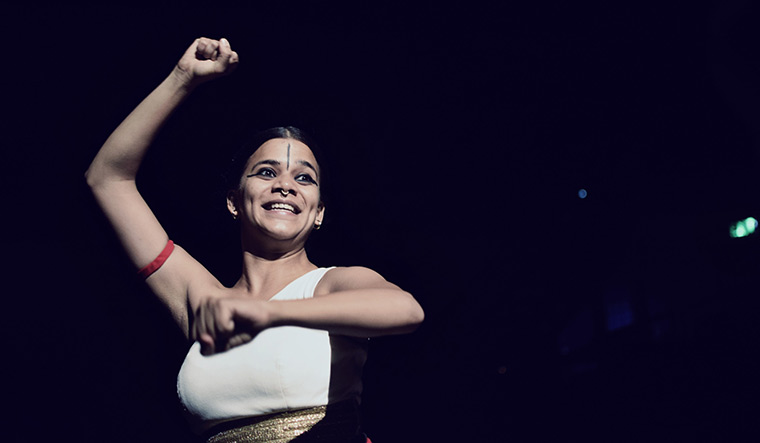 On stage for Shikhandi.

“When I taught Srishti in drama school, I always wanted to work with her once she was out of the school,” said Jalali. “You give an exercise to an actor and everybody has their own way of doing it. Some actors think differently. They are a notch above. I was sure I wanted Srishti for 07/07/07.” Jalali says that with her experience of working on multiple platforms, Shrivastava has grown in her perspective and performance. “She has gotten more refined,” she said. “She is somebody I would work with anytime, anywhere, blindly. I know the discipline and dedication she brings to whatever she does and the joy with which she does it. There are days when she is struggling; days when she questions what she does. But she always comes out stronger.”

Shrivastava’s last theatre performance before the lockdown was in Shikhandi at Prithvi Theatre. She is eagerly waiting for the auditoriums to be opened once again. But with the adulation coming her way for her turn in Gulabo Sitabo, she wants to be honest with herself. “I always wanted to be an actor, and what attracted me to it was the fame that came along,” said Shrivastava. “I got some of it with the Girliyapa videos and even with Shikhandi. I don’t know if the lockdown has made me wiser, but I feel that doing Gulabo Sitabo was to get more work ahead. My ultimate goal is to do mainstream cinema and good work as a lead. I knew that if Guddo works, it would hopefully open more doors.” Train rides for her may never be the same again.