Well… this year’s Eid had been like no other Eid in my memory. In my lifetime, I hope I will never spend such an Eid. My loom was silent and sad. So was I. Our entire mohalla was silent—had been silent for two months now, after all our orders got cancelled, and the money owed to us by those who had already taken our sarees and lehengas, was not given by the middlemen. They had simply thrown up their hands and said there was none to give.

Everything collapsed overnight. Thank God I had some cash in the tin box—an advance given by a tourist—a memsaab from phoren. Imagine, this mem wanted to get married in America wearing my saree! I had sold many of my weaves to these goralog in the past, when they came to Benaras as tourists and were brought to our mohalla by guides to show how we worked. But this order was different. Her name, she told me, was Angelina—she wrote it down. But I found it hard to pronounce, so she said, ‘Just call me Angie’. That was easy.

I called her ‘Madam Angie’, and she laughed, saying, ‘No madam. Just Angie!’ Such a big memsaab and so humble. She had a special request—she told me the other weavers in the gully had refused to take her order as they didn’t want to deal with extra double-double work. They’d told her—‘Go to Azarbhai—he is mad! He may do it for you.’

That’s how Angie came to me and asked, ‘Will you weave a special saree which has my love story in it? I will pay extra for the trouble.’ I immediately liked the idea, and asked my loom. Both of us agreed it was unique and a challenge we could meet if we worked very hard. She wanted it for her wedding in June. She told me it was a good time to get married in New York because the weather was always very fine at that time. We negotiated a price—I was most reasonable. I also offered her jalebis and special milk tea, which she enjoyed....

Slowly, carefully, an emotional story was created and a fresh amount fixed. I didn’t overcharge her, though I could have, since this saree required months of hard work. But my loom and I were already hearing the shehnai! I started weaving Madam Angie’s saree after seeking Allah’s blessings and offering dua to her and her future husband, Mark Saab. After she left, we kept in touch over WhatsApp, with me using Ali’s smart phone, and sending her pictures as the saree progressed on the loom.

Throughout that period, I only listened to Ustad Bismillah Khan saab playing the shehnai as only he could. I feel a weaver’s mood and state of mind affects what he creates. This was a very precious responsibility given to me by a good woman. I wanted her saree to be a masterpiece! Nothing less.

While I was halfway through it, something terrible befell the world. At first, I ignored what I was hearing, and continued to weave. I told myself, these are just stories. In India, we are used to all kinds of diseases. In Benaras life and death have always co-existed through centuries—we take both for granted. I had grown up seeing funeral pyres and corpses burning on the ghats all day and all night. Death did not frighten me. But what Ali was sharing with his friends and sometimes with his ammi and me, was something far worse—it was an unknown harbinger of death and suffering. Maybe he did not want to scare us by discussing this topic. But from the little I could make out from what they were showing on television, I knew it was a major calamity... and the whole world was getting infected by... some said an insect, some said a bat, some said a chemical. But all said it came out of China.

­—Extracted with permission from No Love Lost and Other Stories: 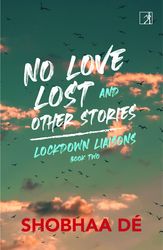 No love lost & other stories