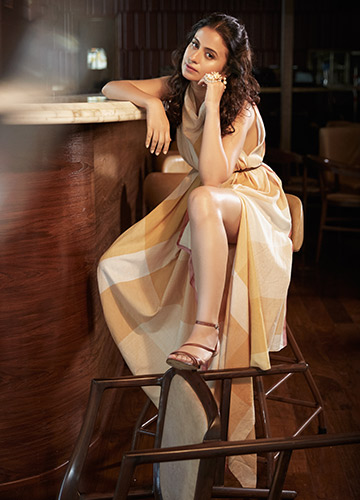 In a few weeks, Rasika Dugal will again be seen as Beena Tripathi in the second season of Amazon Prime Video’s Mirzapur. She has had a good year with her performances in Made In Heaven, Hamid (film) and Delhi Crime getting plaudits from everywhere. The actor talks about the response, working in sophomore seasons of shows and what relief it is being married to an actor.

You have got an amazing response for everything that you have done recently. Even a small scene in Lust Stories last year got noticed. Are you thrilled?

Honestly, I have started getting scared. It is very nice, obviously. But when something starts meaning that much to you, I do not want the consciousness of that to seep into my work. I try to keep away from it a bit. At the same time, I am curious also. It really is encouraging to get a good response.

You have the second seasons of two shows, Mirzapur and Delhi Crime. What does it mean to be revisiting characters that you have already done and have got a feedback on?

It makes me nervous, because everybody has given feedback [on the character and the show]. Most of the people have seen the character. You yourself have seen it and you have to revisit it again. That is a strange sort of feeling. I earlier thought it was easier to keep all the feedback out of the way. But that is not easy to do. So, I embraced it rather than try and work against it. May be it will lead me to being more invested in what I am doing.

You are working with your husband, Mukul Chadda, in an experimental film that is all about improvising?

Yes (laughs). It is also by the director of Kshay (Karan Gour), who I worked with initially. It has been an interesting experience, an actor’s delight. We have already shot it and the film is being edited. Since it was improvising on the sets, we, as actors, tried a lot of newer things. Now, Karan is weeping at the edits (laughs).

As actors, Mukul (last seen in The Office on Hotstar) and you have had an almost similar journey. Both of you struggled to find a prominent space and now have worked on successful projects. How would you define your relationship?

It is nice being married to an actor. There is so much that you do not need to explain while sharing your experiences as actors. And the kind of odd lives that we lead, like you can never make a plan, [it] really helps. Anybody doing a regular job would think I am crazy. It is really difficult to understand this life. And, luckily, it has worked out quite well.