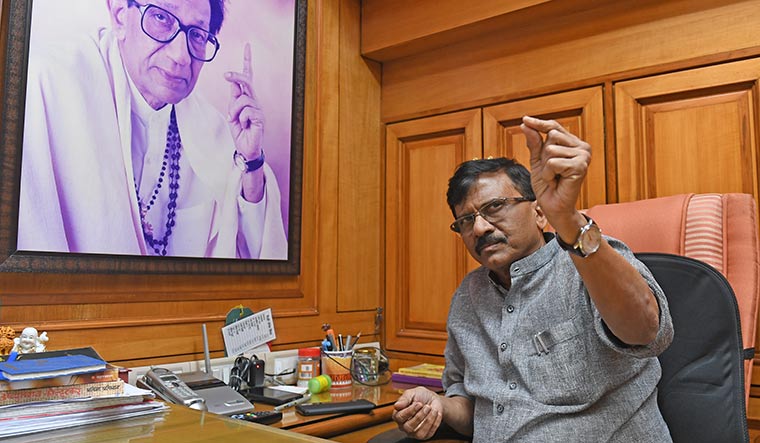 SANJAY RAUT, Rajya Sabha member and editor of the Shiv Sena mouthpiece Saamana, is known for being blunt. He minces no words while attacking the BJP, especially its leaders in Maharashtra.

Raut is one of the architects of the Maha Vikas Aghadi, a coalition of the Sena, the Nationalist Congress Party and the Congress that has been in power in Maharashtra since 2019. A close confidant of Chief Minister Uddhav Thackeray and NCP chief Sharad Pawar, Raut recently came under the Enforcement Directorate’s scanner. The ED has attached his properties, including the flat where he lives in Mumbai. Not one to feel afraid, Raut continues to take on the BJP.

When not busy with politics, Raut can be found at the office of Saamana, writing editorials and going through pages as they are being made. In an exclusive interview with THE WEEK, he spoke on a variety of issues, including the allegations against him and Thackeray.

Q/ The MVA government is completing two and a half years. The BJP keeps saying that the government will collapse because of internal clashes, but nothing of that sort has happened. Who should be given credit for forming this unlikely alliance?

A/ The credit goes to BJP leaders in Maharashtra, and their ego and arrogance. [BJP president] Amit Shah and Uddhav Thackeray had decided [before the 2019 assembly polls] that theirs will be an equal distribution of power. But during seat-sharing talks, Sena got fewer seats than it deserved. Then there were efforts to defeat Sena candidates in various constituencies. Despite that, we won 56 seats. The BJP leaders’ attitude was, ‘We will manage them (the Sena) easily; they will have to bow to our wishes; where will they go?’

This hurt us immensely. It was clear that they wanted to finish us off. So, out of this attitude of the BJP to finish off every other party, including an old ally like us, this alliance was born.

Q/ But who made the first move? Did you approach the NCP first, or did the NCP approach you?

A/ As the election results came and no one from the BJP approached us, it became clear in my mind that the government cannot be formed without the Shiv Sena. Since there was no move from the BJP’s side, I went to Sharad Pawar’s residence that evening and asked him whether something can be worked out. That is how the ball was set in motion.

If we had not gone to the NCP, the BJP would have gone to the NCP. When our alliance broke in 2014, the BJP had formed government in Maharashtra with outside support from the NCP. Even as we were talking with the Congress and the NCP [in 2019] Devendra Fadnavis of the BJP formed government with [NCP leader] Ajit Pawar. So it is certainly not true that the BJP is dead against the NCP.

Q/ BJP leaders call you Pawar’s man. They say that you broke the Sena-BJP alliance.

A/ I am very close to Pawar; what is wrong in that? Pawar has 55 years of experience in parliamentary politics. He is among the tallest leaders in India. He has done immense work as chief minister of Maharashtra, and then as Union minister. His contributions in the fields of agriculture, education and women’s development are immense. So, if I get to learn something by being close to him, what is wrong in it? If that makes me Pawar’s man, so be it. In that case, even Prime Minster Narendra Modi is Pawar’s man because he had openly said that Pawar is his guru.

Q/ When Balasaheb Thackeray was alive, the saffron alliance was governed by one principle—that the BJP will manage the nation and the Sena will handle the state.

A/ Exactly. Balasaheb told the BJP that they should look after national politics and leave Maharashtra to the Sena. This was the understanding between Atal ji (Atal Bihari Vajpayee), [L.K.] Advani ji, Pramod ji (Pramod Mahajan) and Balasaheb. But, as you are witnessing, the BJP has changed for the worse. They want Delhi; they want Maharashtra; and now Mumbai, too (in the upcoming Brihanmumbai Municipal Corporation polls).

Q/ What is the difference between the BJP of Vajpayee and Advani and the BJP of Modi and Shah?

A/ The BJP of Atal ji and Advani ji had respect for the space of others. They never wanted to crush other parties, or for that matter, grow at the cost of their allies. The BJP of Modi and Shah does not believe in such niceties; it is ruthless and power-hungry.

What is surprising is that it does not mind making adjustments for leaders like Nitish Kumar, who had openly opposed Modi ji’s candidature for prime minister. It does not mind sharing power with Mehbooba Mufti in Jammu and Kashmir. But, when it comes to the Shiv Sena, its oldest ideological ally, they were not willing for equal distribution of power.

Q/ The house where you live has been attached along with eight other properties in the Patra Chawl redevelopment case.

A/ I don’t even know where Patra Chawl is. I have never been there. Central agencies claim that Rs55 lakh was deposited in my wife’s account by the wife of one of my acquaintances. They don’t tell you that the money was repaid. I have mentioned every detail of this in the affidavit that I have to file as a member of the Rajya Sabha. We are middle-class people. I have done everything legally. Every record has been placed before the Rajya Sabha. I have nothing to hide.

If the ED is so concerned about illegal money, why doesn’t it investigate how crores of rupees were deposited in banks in Gujarat after demonetisation. A senior officer in one of the Central agencies told me that they have a target given by their political bosses.

Q/ The income tax department recently raided properties allegedly belonging to Sena leader Yashwant Jadhav. They found a diary that had notes such as ‘Rs2 crore paid to Matoshree’, and ‘Watches worth Rs50 lakh given to Matoshree’.

A/ Nonsense. Nothing was paid to Matoshree. Show me the diary.

Q/ Surprisingly, Uddhav Thackeray is silent on this issue, as well as on the issue of the ED attaching properties of his brother-in-law Shridhar Patankar.

A/ Why should he react to ridiculous allegations? He will speak at an appropriate time.

A/ I don’t have anything personally against Somaiya. But he has gone mad. He is thoroughly corrupt himself. He talks so much about the PMC Bank fraud case, but he put pressure on the Wadhawans (businessmen Rakesh and Sarang Wadhawan, who were accused of defrauding the bank) and cornered plots of land in the Vasai-Virara belt for his son’s construction company. I have also exposed how he collected money by claiming that it would be used to save INS Vikrant from scrap dealers.

Q/ Could you please elaborate on the INS Vikrant issue?

A/ Somaiya had launched a ‘Save INS Vikrant’ campaign and collected some Rs57 crore [to prevent the decommissioned aircraft carrier from being torn down]. He said that the money will be handed over to Raj Bhavan. But Raj Bhavan sent me a reply that they never received the money. This is not our Raj Bhavan mind you; it is their Raj Bhavan. (Governor B.S. Koshyari has been accused of acting in a partisan manner.) I want to ask him: where is the money that he had collected?

Q/ You spoke about ‘their Raj Bhavan’. The conflict between the governor and the MVA government seems to be unending.

A/ The governor is responsible for this. He has been against our government right from the beginning. He has not nominated 12 legislators for almost two years now. He recently walked out of the state legislature even before the national anthem was played. Is this constitutional behaviour?

Q/ Coming to the question of opposition unity to take on the BJP in 2024, what is on the table for discussion?

A/ It is necessary to have a strong, united opposition to defeat the BJP in 2024. Leaders of all opposition parties must come together and chalk out a plan. And this unity cannot work without the Congress. The Congress has presence in every constituency. All other parties should work together with the Congress to help the party strengthen itself. Only then can a unified opposition take shape.

Q/ Who will lead the opposition?

A/ We will have to find a candidate who is acceptable to all.

A/ Pawar saheb has said that he is not interested. But if you ask me, he is the tallest leader among us. He has the stature, experience, acceptability and ability to bring all parties together and lead them.