Russians are complaining about losses in Ukraine and their uncertain future

'Special operations' have acquired the features of an apocalypse 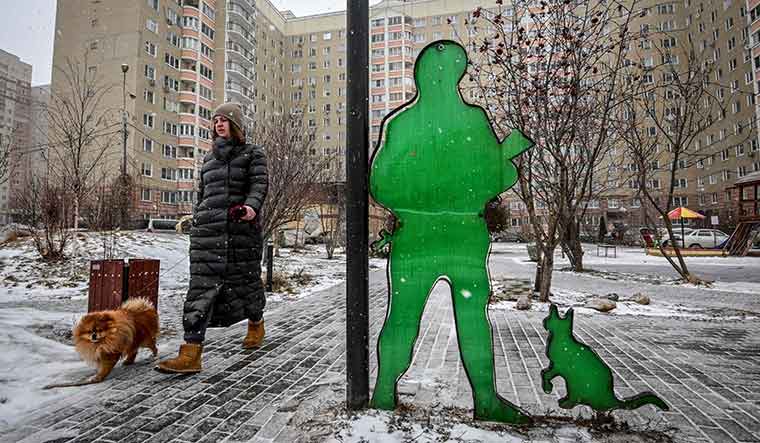 Losing steam: An installation of “polite people”, which represents the russian soldier, near moscow. Most Russian soldiers are said to be unhappy about faulty war planning | AFP

NEWS ABOUT THE war in Ukraine still occupies front pages, but it is becoming increasingly difficult for Russians to understand what really is happening. Even official reports from the ministry of defence—which hardly anyone believes—convey the impression that the “special operation” ordered by President Vladimir Putin has stagnated.

Independent sources say that the war is, at best, moving into a protracted stage. Russian troops suffer losses, run into ambushes, face fierce resistance and are hampered by shortages from overstretched supply lines. There are also reports about the lack of fighting spirit among Russian soldiers as they grow increasingly dissatisfied with the faulty planning and the needless death of their comrades. Against this backdrop, Russian authorities are trying to show how much they value the military, but they have not been quite successful. On March 27, Alexander Fomin, the Russian deputy minister of defence, visited a hospital and presented medals to servicemen who became disabled in the Ukraine campaign. While the function was widely covered on national television, the public response was mixed. “The military has no idea what kind of hell the lives of soldiers have turned into. Being on a wheelchair in Russia is a losing war,” say those who know about the poor infrastructure for the disabled in the country.

Russians, meanwhile, have started complaining about rising prices caused by western sanctions and the weakening rouble, and, of course, their uncertain future. People are stocking up on food and essentials, leading to artificial shortages. It is early spring in Russia, and there are practically no local fruits and vegetables available. Everything is imported and payments are made in dollars. There is talk about switching to payment in roubles and other currencies—for example, in rupee with India—but this applies only to large contracts.

It is difficult to say whether such a situation favours Putin’s popularity. Due to the strengthening of the repressive apparatus and censorship within the country, many people prefer not to talk about their views. “It is forbidden by law to say what you think” has become a refrain across Russia.

Under the circumstances, there is no one to object to stories about the triumph of the “special operation”, while extremely unpleasant denunciations of those who are opposed it have become quite common. Some pro-government Telegram channels openly compile lists of “national traitors” (the term was first used in Nazi Germany and has been adopted by the Russian authorities). District police departments complain that they are inundated with alerts from people who want to report on suspicious statements from others, including their own neighbours.

Sociologists, however, believe that even among supporters of the war, the initial euphoria is on the wane, as they begin to see the dubious prospects. Vladimir Pastukhov, political scientist at the University College London, said the Russian people’s credit of trust to Putin would be exhausted by the middle of summer.

At the same time, the “special operations”, referred to as a blitzkrieg in the beginning, has acquired the features of an apocalypse. Increasingly, Russian officials are talking about the use of nuclear weapons. Former president Dmitry Medvedev, who is now the deputy head of the Russian Security Council, explained the conditions under which Moscow could use such weapons. These are: nuclear attacks on Russia or its allies, attacks on critical infrastructure that could paralyse Russia’s nuclear deterrence or an act of aggression against Russia or its allies that could threaten their existence. Defence Minister Sergei Shoigu said that maintaining the combat readiness of strategic nuclear forces was one of the priorities for his ministry.

One should, however, not conclude from all these that Moscow is preparing to start World War III. Most likely, such statements are a way to remind the west that despite Russia’s dubious successes in the war, it has something to fall back on in the event of direct aggression against it. But, such sabre-rattling, including the threat of using chemical weapons, adds to the nervousness of people, both in Russia and in Ukraine. In Russia, for instance, the use of alcohol, cigarettes and sedatives is rising fast.

Regarding the advantages and disadvantages of the Russian military in Ukraine, experts highlight several points. The advantages include the presence of a large amount of modern equipment like missile systems, aviation, attack helicopters and good operational-tactical intelligence. The obvious disadvantages are the lack of drones and high-precision weapons, such as adjustable bombs and guided shells, the lack of modern armoured vehicles and inadequate preparedness for full-scale combat operations. And, most importantly, Ukraine enjoys the active support of NATO countries. It is not just about financing and supplying weapons, but also about the transfer of intelligence from NATO aircraft and drones.

At the same time, the goals of the “special operation” remain just as incomprehensible. Putin said in February that “denazification” and “demilitarisation” of Ukraine were his priorities. It implies establishing control over Ukraine, or at least over its large cities. But it is unlikely to happen in the current situation. Moreover, a vast majority of Ukrainians now have an extremely negative attitude towards Russia. Even if Russian troops manage a successful offensive, they will have to deal with the growing number of partisans, saboteurs and the attacks engineered by them. After World War II, despite the unconditional support of a majority of the local people, it took the Russian army and the KGB about a decade to subdue Ukrainian separatists. Such a strategy is unlikely to work this time.