Black box and beyond 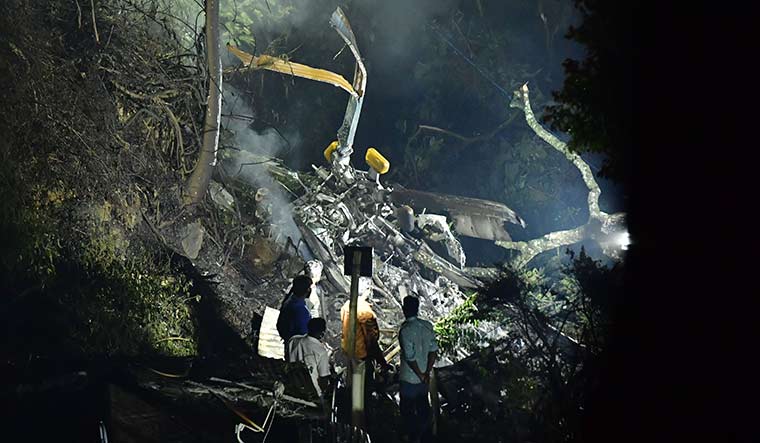 Under the spotlight: Wreckage at the crash site near Coonoor | Jinse Michael

In September 1998, a helicopter that Group Captain R.K. Narang was flying suffered an engine failure. The military chopper, which was returning from a forward mission on the India-China border, crashed and broke into pieces. Narang, his co-pilot and a passenger escaped miraculously. After the crash, he logged more than 2,500 flying hours in the same type of chopper. “Accidents do happen; one has to find the cause and correct it,” he told THE WEEK.

Air Marshal Manavendra Singh, the most senior helicopter pilot in the Indian Air Force, is heading a tri-service court of inquiry into the crash of a Mi-17V5 helicopter at Coonoor in Tamil Nadu on December 8 that killed the Chief of Defence Staff Bipin Rawat and 13 others. Manavendra Singh has experience flying multiple variants of the Mi-17. He has also had multiple accidents. The inquiry will look at all the circumstances of the crash, and scrutinise technical and mechanical aspects. It will also check whether any standard operating procedure was violated. Even potential issues like the pilot being unwell or disoriented could be probed.

Normally, a court of inquiry into a crash has to be completed in 30 working days and is headed by an officer of group captain or equivalent rank. But, as the CDS was fatally involved in the crash, the air marshal seems to be trying to complete the task even earlier. He is constantly in touch with personnel of the Delhi-based Institute of Flight Safety, which has expertise in investigation techniques for air accidents. The Mi-17 was manufactured by Kazan Helicopters at factories in Kazan and Ulan-Ude in Russia. Experts from the manufacturer will be called to join the probe.

The black box of the helicopter was retrieved a day after the crash. It has two components—the flight data recorder and the cockpit voice recorder (CVR). The CVR records conversation in the cockpit and communication with Air Traffic Control (ATC). The Air Force has classified the Nilgiri mountains as a grey zone—meaning that the area is prone to sudden changes in weather. The helipad at Wellington near Coonoor is only suitable for fair-weather landing. Therefore, the court of inquiry would also look at why the chopper was cleared to fly if the weather was bad. If visibility was the issue, then the instructions given to the pilot would be scrutinised.

Narang said that Wing Commander Prithvi Singh, who flew the ill-fated chopper, was the commanding officer of 109 Helicopter Unit, based in the Sulur airbase, and that he was familiar with the route. However, the weather, he said, was unpredictable. “[Even] the best of pilots cannot understand the weather dynamics,” he said. “And, he was flying on the hills into a landing area that was boxed in from three sides.” Experts suspect that the chopper was flying at a low level. But, height and flypast are normally allocated by the ATC if a very important person is being flown. And the pilot cannot divert from the assigned altitude.

Air Vice Marshal Manmohan Bahadur, who was a helicopter pilot, said that the inquiry team would cover all aspects, from the safety of the chopper to human error. “The court of inquiry will investigate anything under the sun,” he said. The sabotage theory has not been ruled out, especially since General Rawat was working towards self-reliance in defence production.

The HF 24 Marut was India’s first locally developed fighter bomber and the first Asian fighter bomber to go beyond the test phase and into production and active service. It was, however, not inducted into the Air Force in a large way in the 1960s because a section wanted to give Russia-made MiGs more space. An officer, who requested anonymity, said: “We lost five decades to get to our own fighter (Tejas). It was certainly because of outside pressure. And General Rawat was pushing Atmanirbhar Bharat. Every aspect has to be thoroughly looked into.”