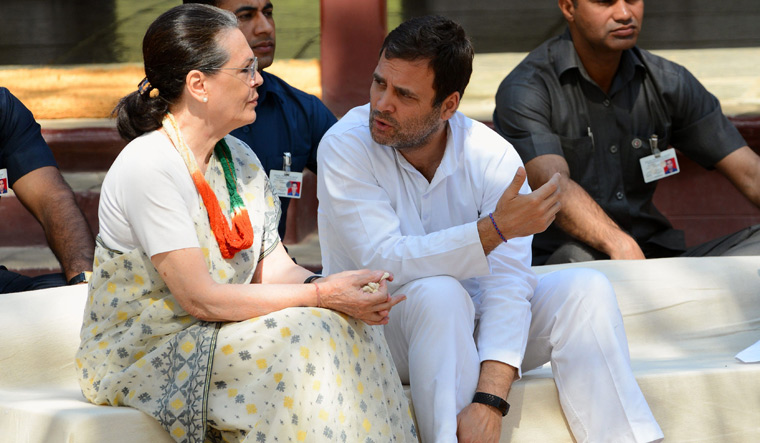 Reluctant allies: the congress under the leadership of the Gandhis is watching Mamata’s moves closely | AFP

On February 13, 2019, Chief Minister Mamata Banerjee was in the Central Hall of Parliament, catching up with the members of the house. The country was gearing up for the Lok Sabha elections, and Mamata was in Delhi on a mission to prop up a ‘United India Opposition’.

She bumped into Congress president Sonia Gandhi, who warmly reached out to her. But Mamata was visibly upset. A short while earlier, Congress leader Adhir Ranjan Chowdhury had launched a fierce attack on her and the Trinamool Congress over the Saradha chit fund scam. Sonia tried to placate her, saying that despite the differences their parties had, they were friends.

The piquant nature of the relationship between the Congress and the Trinamool was evident in the episode—rivals in West Bengal but in search of a common space in national politics. Though they have never been comfortable in each other’s company, they both know that they need each other.

Mamata’s efforts in 2019 might not have been successful, but riding high on her spectacular victory in the assembly elections, things were quite different in her recent Delhi visit. She was back in the capital again on a mission to bring the anti-BJP parties together. And there was far greater hype surrounding her endeavour even as her national ambitions were all the more evident.

The run-up to Mamata’s visit was marked by an unusual bonhomie between the Congress and the Trinamool. A day ahead of her arrival, the Congress tweeted about her nephew, Trinamool Congress general secretary Abhishek Banerjee, being a suspected target of the alleged snooping using Pegasus spyware. The Trinamool responded by tweeting ‘Khela Hobe’ (The Game is On), a reference to Mamata’s dare to the BJP in the West Bengal elections.

Interestingly, Chowdhury, a staunch Mamata critic, said the Congress should not put up a candidate against her in the Bhawanipur byelection. The Congress had even considered replacing Chowdhury as its leader in the Lok Sabha because it felt that his antagonistic relationship with the Trinamool was impeding the coordination between the two parties on the floor of the house.

In Delhi, Mamata met senior Congress leaders Kamal Nath and Anand Sharma, and lawyer-politician Abhishek Manu Singhvi, who is a Rajya Sabha member from Bengal and had appeared for the Trinamool in many cases. But the most anticipated meeting was with Sonia.

A Congress leader said that it was premature to comment on the impact the meeting would have on opposition unity, but it was clear that Mamata had realised that there could be no viable anti-BJP bloc without the Congress. He said that the meeting of opposition parties at NCP supremo Sharad Pawar’s residence recently proved that any attempt at forming a non-Congress front was a non-starter.

Also, election strategist Prashant Kishor, who worked with Mamata in the assembly election and has agreed to extend his services till the Lok Sabha elections in 2024, recently met the Gandhis. It is crucial because he had said that there could be no successful coming together of opposition parties if the Congress was not included. He is said to have played the role of an emissary between the top leaders of the two parties.

“When different political parties, with varied agenda, have to be united, it requires a national party to act as a glue. We may not be as strong as we used to be, but it is only the Congress that has a pan-Indian identity and around which other parties can assemble. I believe that an opposition front can be coalesced only under the leadership of Sonia Gandhi,” said senior Congress leader Pradip Bhattacharya.

Even as the Congress would want to stress that Mamata’s victory in Bengal and her national endeavour are entirely different ball games, it is handling her with utmost care. The party has been alarmed by the talk of regional parties exploring the possibility of a non-Congress front. It wants to be seen as engaging with Mamata, a vocal critic of the Modi government. Also, in the near term, the Congress hopes that a better rapport with her will allow for greater coordination among the opposition parties in Parliament.

The Congress, while keeping Mamata in good humour, is watching her moves closely. “This is not the right time to talk about who will be the face of the opposition,” said Bhattacharya. “Let Mamata try her level best. We are waiting to see how successfully she can gear up to the situation.”