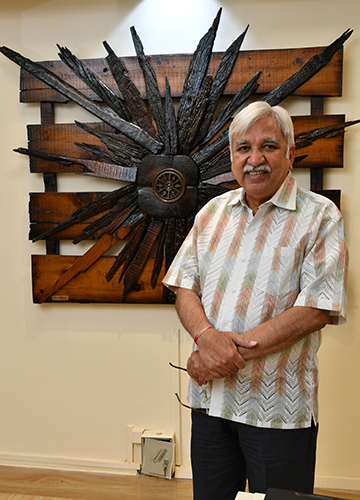 Sunil Arora, who demitted office on April 12, chose THE WEEK for his last interview as chief election commissioner. He said he was anguished over the constant attacks the commission faced, especially from the ruling Trinamool Congress in West Bengal. He also said that the attacks on Central forces in West Bengal was worrying and had a pattern.

On West Bengal Chief Minister Mamata Banerjee terming the death of four persons in the Central Industrial Security Force firing in Cooch Behar a genocide, he said the commission would go through the reported statement and discuss what was to be done.
Excerpts from the interview:

You had described holding Bihar elections amid COVID-19 as a 'leap of faith'.
Conducting elections in Bihar, with 7.3 crore voters, has become a watershed moment in the history of elections worldwide. It was indeed a leap of faith, but not a leap in the dark…. The commission's confidence was based on meticulous advance work done by our officers. I have to compliment the Bihar bureaucracy, too. Some of the officers contracted Covid-19, but they jumped back right in as soon as they recovered. A new parameter was added in the context of Covid-19, which is having a safe election.

We have another round of elections amid a pandemic.
While planning the Bihar elections, the commission deliberated with political entities, the state chief electoral officer and health ministry officials, and came up with broad guidelines for conduct of election during Covid-19 in August 2020 itself. The updated guidelines have been reiterated for the ongoing elections.

But you must be concerned about the crowds in rallies.
The commission reiterated the Covid-19 guidelines in an advisory sent to all political parties recently, and we plan to take some drastic action in the coming days. Our submission is that we require the willing cooperation of political parties.

The EC is being attacked regularly by the Trinamool Congress in West Bengal.
The commission has been interacting regularly with representatives of political party whenever they have sought time. The allegations seem only an attempt to belittle the institution with repeated innuendos and averments. The commission maintains the position that we would not like being put in the dock for alleged proximity to any political entity.

There is constant criticism of central forces deployed in West Bengal.
The systematic attacks on the uniformed forces is quite worrying. In the notice issued to the most senior leader of the Trinamool Congress, we mentioned that there is a pattern to it. They had initially raised the issue about the Border Security Force allegedly threatening villagers, but did not provide any concrete evidence. We should not castigate any force, be it Central or state, anecdotally and demoralise them.

Mamata Banerjee called the Cooch Behar incident a genocide.
Anybody who uses the word ‘genocide’ could perhaps first Google to check what it means. But if it has indeed been said, we will get the text and go through it. The commission will discuss what is to be done..

How big a concern was the use of money power in Tamil Nadu?For the Tamil Nadu elections, the commission deployed 118 expenditure observers. It also appointed two special expenditure observers for more focused monitoring and to curb distribution of cash, liquor, drugs, precious metals and freebies. Of the 234 constituencies, 118 were marked as expenditure sensitive. Cash, liquor and narcotics worth Rs 446.28 crore were seized.

Can simultaneous elections be held soon?
In order to synchronise elections at the Centre and state Assemblies, an amendment is required in Articles 83, 172 and 356 of the Constitution to provide that the term of the Lok Sabha and Assemblies may coincide. An amendment needs to be brought in the law so that the existing term of some of the Houses is curtailed or extended, as a one-time measure.

When will remote voting become a reality?
A large number of voters are outside the spectrum of voting on account of their physical location, because of their occupation or education or other reasons. The commission had earlier this year started a research project for enabling remote voting for such voters in consultation with IIT Madras and eminent technologists from IITs and other institutions. A dedicated team has been working hard to give shape to this project. Hopefully, it will see the light of day by 2024 Lok Sabha elections.

Is there a proposal to allow NRIs to vote using e-postal ballot?
The commission has taken up a proposal to amend the Conduct of Election Rules, 1961, to facilitate electronically transmitted postal ballot system for overseas electors. The matter is under consideration with the ministry of external affairs.

At what stage is the proposal to link voter ID cards with Aadhaar?The commission has proposed to link electoral roll with Aadhaar to curb multiple enrolment of persons. Amendments need to be made in The Representation of the People Act, 1950, and in the Aadhaar Act for permitting the election machinery to obtain and use Aadhaar numbers for purposes of electoral roll. The matter is under the government’s consideration.

There is no let-up in political parties raising doubts about EVMs.
When you lose, why make the machine a flogging object? The allegations unnecessarily cast aspersions on the integrity of the election process and specifically the EVMs which have been developed by some of the most brilliant minds. The EVMs are made in a secure environment and distinguished emeritus professors of reputed institutes supervise the entire process. Also, while
EVMs may sometimes malfunction like any other machine, they cannot be tampered with.

There are demands that the proportion of EVMs taken up for VVPAT verification be increased.
The issue of 100 per cent counting of VVPAT slips was raised by various political parties during the 2019 Parliamentary elections and some petitions were also filed in high courts and the Supreme Court. The Supreme Court has held that the number of EVMs subjected to VVPAT verification would be five per assembly constituency or assembly segment in a Parliamentary seat.

Experts have raised issues of transparency with regard to electoral bonds.
The matter is sub-judice. The commission has already furnished its reply before the Supreme Court. Earlier, the commission sent a letter to the ministry of law and justice, dated May 26, 2017, highlighting issues such as non-reporting of receipts through electoral bonds in contribution leading to opacity regarding receipts from prohibited sources; non-disclosure of political party-wise donations by corporate entities due to amendments in the Companies Act, 2013; and removal of limit of 7.5 per cent of average net profits in the preceding three financial years, which could give rise to the possibility of use of shell companies to make political donations.

There were internal differences in the commission with regard to certain decisions. In such instances, shouldn't each member's views be put in the public domain?
The three members of the EC are not expected to be clones of each other. There have been so many instances in the past when there has been a vast diversion of views as it can, and should be. The opinions of all three Commissioners are always noted on files, but when it is formally communicated, differences of views are not part of the order.
As you complete your tenure as CEC, what are the initiatives that bring satisfaction to you?

I have the satisfaction that some key amendments have been made in the election laws. For example, amendments in Form 26 to include the source of income of the spouse and dependents and to capture more details of criminal background of the candidate and details of contracts entered by the candidate, spouse or dependents. Also, amendments were made in the CE Rules, 1961 to provide optional postal ballot facility to persons with disability, senior citizens, absentee voters from essential services and Covid-19 suspected or affected persons.