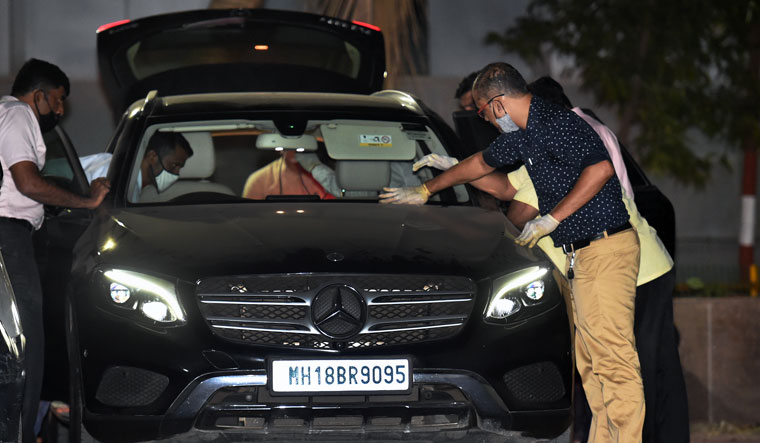 The sprawling premises of the Mumbai commissionerate in Kalbadevi is largely quiet on a regular day. The Crime Branch teams would be in the field and senior officers would be engrossed in files on crime in the city. But, in the last few days, there has been a flurry of activity.

On March 19, for instance, the National Investigation Agency team led by Inspector General of Police Anil Shukla reached the commissionerate for a meeting with the new commissioner, Hemant Nagrale. NIA sleuths had already been there to collect evidence from the office of encounter specialist Sachin Vaze after the Union home ministry handed over the Antilia bomb scare case to the agency.

It was a new low for the Mumbai Police when the NIA found incriminating material from Vaze’s cabin. Incidentally, Vaze—an assistant police inspector—had his cabin on the same floor as senior Crime Branch officers. Vaze was arrested by the NIA on March 13. In the coming days, the NIA may record statements of senior police officers. If it unearths a money trail, the Enforcement Directorate is also likely to open an inquiry.

Senior Mumbai Police officers said the alleged terror-cum-extortion racket was “waiting to explode”. When the Mumbai underworld was at its worst, the stature of encounter specialists had risen. They were celebrated and enjoyed political patronage as their work helped governments claim credit for improving law and order.

“But, slowly, when the crime graph went down, some of these cops faced inquiries and others, like Vaze, even got arrested,” said a senior officer, who did not wish to be named.

The NIA probe against Vaze has once again drawn attention to the case which led to Vaze’s suspension in 2004. Investigators may attempt to decipher any patterns or similarities in the modus operandi. But, the body of the victim, Khwaja Yunus, was never found. The case is still pending in court.

Ajay Raj Sharma, former Delhi
Police commissioner, said the reinstatement of sharpshooters and encounter specialists after being suspended was a bad precedent set by the Mumbai Police. “When any state police force becomes a force of the ruling party, the latter starts using it and, in turn, allows concessions to officers to bring in their own men,” said Sharma. “Nothing can be worse than using police officers to make money for the ruling party by extorting the public.”

There are questions about Vaze’s return to the force, too. He was reinstated to assist with Covid-19 duties. But, it is learnt that Vaze was not given pandemic duties. Instead, he was brought back to the Crime Branch, where he reported directly to the top brass and was involved in high-profile cases.

“All national police committees have given recommendations to free police from the clutches of political parties in power,” said Sharma. The recommendations, which include non-interference by the ruling party in transfers, postings and appointment of police chiefs, are pending before the Union home ministry. In the meanwhile, the IPS and the ruling parties, said Sharma, should guard against creating “Frankenstein’s monsters” by forging dangerous ‘mutually beneficial’ arrangements.