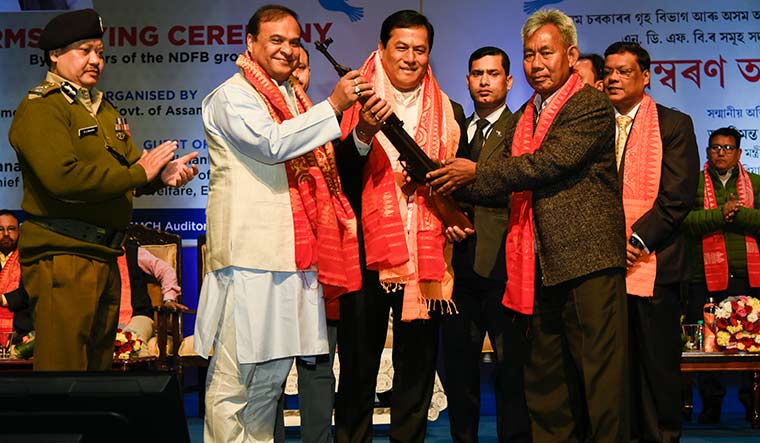 ON MARCH 3, Nahid Karishma, deputy superintendent of Assam Police, and her team waited patiently for hours at the Diphu railway station in Karbi Anglong district in southern Assam. She had intel on a terror attack being planned at the railway station. In fact, she had been gathering intelligence for weeks about the activities of the banned Dimasa National Liberation Army (DNLA).

Nahid and her team intercepted a man with a Chinese grenade just before he reached the platform. “A major disaster was averted,” said Satyaraj Hazarika, deputy inspector general of police. “It was an operation based on Nahid’s collection of intelligence at the district level.”

The intelligence, however, has been piling up. The DNLA, allegedly, is supported by the National Socialist Council of Nagaland (NSCN-IM), one of the biggest insurgent groups in the northeast, and it is planning an explosion at Dhansiri market. Another warning says the United Liberation Front of Asom-Independent (ULFA-I) is threatening oil installations in the state and recruiting youth. Yet another one says Bodo youths are regrouping in the villages of Bodoland Territorial Region (BTR) to create a new militant group. Then across the border in Bangladesh, there is a surge in anti-India activities by the Jamaat-ul-Mujahideen Bangladesh (JMB).

In addition to all these, there are about a dozen warnings about subversive activities being planned during the assembly elections in the state. Ironically, the elections were supposed to be a litmus test for the Narendra Modi government’s claim that insurgency had been curbed in the state that had long been a hotbed of separatist movements. “Assam remains a focal point in the northeast,”said Lt General Shokin Chauhan, former chairman of the Ceasefire Monitoring Group in Nagaland. “It is the richest state and it connects all the northeast states. Most of the extortion by insurgent groups and criminal elements is connected to rich people in the state because of tea gardens and industries.” It is also a transit route for insurgents.

Assam has been a tinderbox over the past few months. It witnessed widespread protests over the government’s move to implement the National Register of Citizens and the Citizenship (Amendment) Act in the winter of 2019-2020. While the BJP is maintaining a strategic silence on it, the Congress is keeping the pot boiling through its anti-CAA campaign and cobbling up a grand alliance with Badruddin Ajmal’s AIUDF, Bodoland People’s Front, CPI, CPI (M), Bodoland Democratic Front and Anchalik Gana Morcha.

The Assam-Bengal corridor has also become active on the security graph with the police from both states trying to track the movements of JMB and its associated operatives. After a blast in Burdwan in Bengal in 2014, a few JMB men were arrested in Assam. “We have information that Islamic fundamentalist groups are trying to expand territory,”said Bhaskar Jyoti Mahanta, director-general of Assam Police. “They are taking advantage of the proximity with Bangladesh, hiding in border districts and making forays into Assam and West Bengal.”

A political blame game has also begun with BJP holding the Mamata Banerjee government responsible for rising “radicalisation” in West Bengal. “If you see last several years’ record, police forces of other states have intelligence about terror activities in West Bengal but the state administration does not seem to be aware or equipped to handle it,” said Sukanta Majumdar, BJP MP from Balurghat. He said the NIA’s probe into the Burdwan blast brought out how the state was vulnerable to terror activities. “There are congregations being held by radical outfits in the state who are propagating extremism and have cross border support,” he said.

Police say there was a high-level meeting of JMB functionaries in Dhubri in May 2020 for planning operations in Assam and West Bengal. But the arrests of two JMB cadres in Hooghly and Murshidabad by a special taskforce on May 29 and June 2 foiled the plans. The Assam Police, however, believe a new wing of the JMB has come up.

Meanwhile, the Islamic State terror module in lower Assam is using the remnants of the Harkat-ul-Mujahideen, which was busted in 2010-2011. These cadres, trained in Afghanistan and Bangladesh in making bombs, have been carrying out a recce of venues of important political meetings, said a counter-terror official.

A Kerala-based extremist organisation, too, is recruiting in Assam by cashing in on the anti-CAA sentiments. There are recruitment and training camps in Barak Valley, Goalpara, Nagaon, central Assam and Char areas. “These fundamentalist groups are trying to acquire a secular clout and are using the CAA to mobilise support, but they are not getting credence among the minority community,” said Mahanta.

There is also a growing threat from dreaded outfits like ULFA and NSCN (Khaplang). The kidnapping of two employees of Quippo Oil and Gas Infrastructure Limited on December 21 by a joint group of ULFA and NSCN (K) showed that they were trying to fill their coffers before the elections. Intelligence inputs have warned that these outfits may try to extort from parties and candidates, and influence voters.

A year ago, 1,615 militants belonging to different factions of the National Democratic Front of Bodoland (NDFB) surrendered before the authorities, which led to the signing of the Bodoland Territorial Region Accord (BTR). A historic peace deal between the state, the Centre and Bodo stakeholders, BTR was the third accord signed in the past 27 years to end the violent movement for a separate Bodoland.

While the accord changed the name of the Bodoland Territorial Area District (spread over Kokrajhar, Chirang, Baksa and Udalguri) to Bodoland Territorial Region, there was no mention of a separate Bodoland state. However, after the signing of the agreement, K. Batha, a key NDFB leader, left for the jungles. Batha has now returned with G. Bidai, the dreaded army chief of the banned outfit, and he is reportedly trying to build a militant group by recruiting Bodo youths.

Ranjit Basumatary, former general secretary of the NDFB(S), said Batha’s return was a setback to the Bodo peace process. Basumatary, who is now an executive member of the Bodoland Territorial Council, has urged the Union home ministry not to delay the implementation of the clauses of the accord, which include monetary assistance, recruitment of NDFB cadres in government jobs, ex gratia payment and rehabilitation, and a special assistance package. “There is trouble in the lower BTR areas as youth are joining Batha because they have no means of sustenance,” he said. “We are still waiting for the special assistance promised by the Centre.”