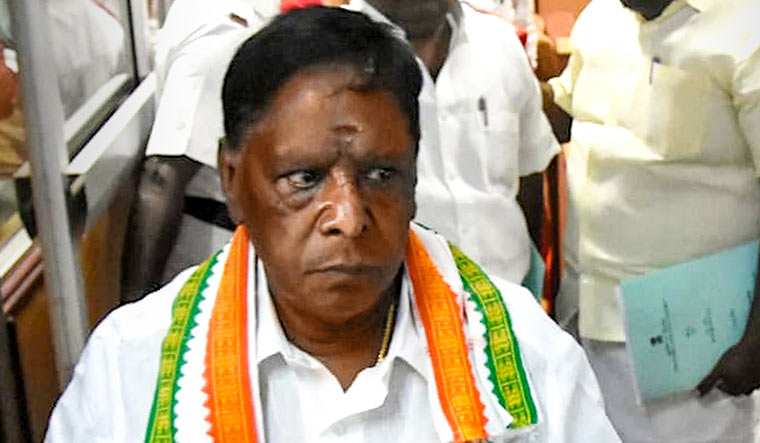 Q/What do you have to say about the fall of your government?

A/Our government assumed office in 2016 with the support of 18 MLAs. The N.R. Congress and the BJP began targeting me after I won the Nellithope assembly byelection in November 2016. Since then, I have been thwarting their plans to destabilise my government. While these parties were targeting me, the then lieutenant governor Kiran Bedi interfered in the day-to-day affairs of the government and was trying to run a parallel government by holding review meetings of departments. She is an incorrigible element and nobody can correct her. I fought her every single day, and ultimately we succeeded when she was thrown out of Puducherry. The new lieutenant governor Tamilisai Soundararajan, who also belongs to the BJP breed, has begun acting in a biased manner. Whatever be the situation, I am a fully satisfied man. We have almost completed our tenure and there are hardly 10 to 15 days left for the model code of conduct to come into effect. The BJP has toppled our government at the fag end of our tenure.

Q/What does the BJP gain from toppling your government with just two months left for the tenure to end?

A/The BJP did not want the Congress government to be in power during the elections. They did not even want a caretaker government of the Congress. The BJP always wanted to rule Puducherry by proxy and has plans to merge it with Tamil Nadu. They tried to topple my government for the past four years but failed. However, the people of Puducherry will teach them a lesson.

Q/Five Congress MLAs and one MLA belonging to your ally, the DMK, resigned in the past few weeks. Does it mean that they did not have confidence in their own government?

A/The BJP lured them with false promises. It has been using investigating agencies to threaten people in Puducherry much like it had done in other states where it toppled governments. Why did these people leave after enjoying power for five years? Why did they not complain earlier? Why did they not raise issues two years back or even last year? They knew the term of the government was ending, and they joined the BJP as it would be lucrative for them.

Q/Why do they find the BJP lucrative?

A/I know the BJP’s game plan. But these MLAs do not. No one except those from the RSS can occupy positions in the BJP. They will lure people from other parties, use them and dump them. This is what happened in Madhya Pradesh. They took Jyotiraditya Scindia. He was the number two in the Congress in the state, but today he is nowhere to be seen.

Q/You say the Congress and the DMK will go to the people. What will you tell them?

A/Our election agenda will be disclosed at the time of campaign. We cannot disclose it to the media.

Q/Will the BJP be able to make an impact in Puducherry in the upcoming elections?

A/In 2016, 18 candidates of the BJP contested and all of them forfeited their deposits. The BJP state unit president got just 1,400 votes, but he was nominated to the assembly. Another MLA who was nominated had got just 165 votes. This is the pathetic condition of the BJP in Puducherry. The people of Puducherry want a secular front.