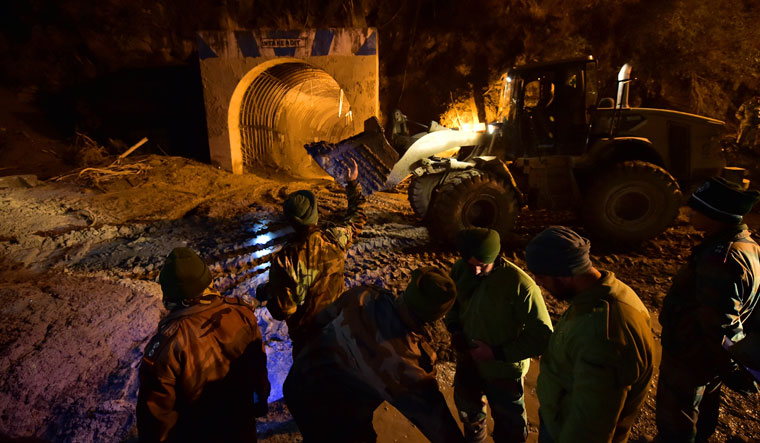 It is past midnight when we are able to reach the Tapovan tunnel, one of the two epicentres of the Uttarakhand disaster. It has taken us 22 hours to get here, making our way through narrow, winding mountain roads, a slew of stone and rubble landslides and a jam of trucks and cars every few kilometres.

To get to the tunnel where earthmovers are wrestling with metal, mud and rocks, one has to wade through ankle-deep slush that pulls you down like quicksand. The slush has been a major challenge for the rescue operations that are being led by Deputy Inspector General Aparna Kumar, a woman officer of the Indo Tibetan Border Police. A record-breaking mountaineer, Kumar tells me how there has been no communication with anyone inside and the black hole of information is only making matters worse.

Only once did someone’s mobile phone ring, hinting at a sign of continuing life. For family members who stand in the freezing cold—the temperatures are sub-zero—the wait is the hardest. I meet a father whose young son is trapped inside, and the elder brother of 25-year-old Deepak, a civil engineer, who is also among those about whom there has been no news for three days. “I called his phone. It just said, ‘out of network area’,” Deepak’s brother says softly, preparing himself for the worst.

Despite the heroic efforts of the ITBP, the National Disaster Response Force, the Army and the civil police, time is running out. The chances of pulling out anyone alive are diminishing. There is very little chance of there being enough oxygen inside and then there is the serious danger of the workers dying from hypothermia before the rescue teams can get to them. “But if we can save even one life,” says Kumar, “we will not give up.”

Through the night, they are at it. They take turns to take quick breathers, warming themselves around a small makeshift fire. Ambulances stand by, prepared for the worst.

Briefly, it seems the machines have had luck in clearing out blockage to the tunnel. Soldiers make their way inside on foot, but have to retreat again after a few metres—the slush they encounter could suck them into the tunnel, too. “I cannot risk that,” says Kumar.

The site of the other rescue operation—the Rishiganga hydroelectric project—has been completely washed away. Here the ITBP has been able to recover bodies carried away by the rage of the river. Ironically, the project stands near the village of Reini, where the state’s first environmental movement—the Chipko movement—began. Even recently, the villagers attempted to stop this project by taking it to court. But in the now familiar development debate between big and small dams, they lost. Today, their I-told-you-so moment brings neither relief nor redemption.

In this state, the tragedy only brings an acute sense of deja vu. As we drive from Delhi to Joshimath, in the small villages of the state, local residents want to know when too many tragedies will be too many. The locals tells us that no lessons have been learnt from the 2013 floods—also a calamity I reported from the ground. It takes the women to really call out the inconvenient truth. “They call our land devbhoomi [land of gods], but we have ruined everything that is sacred about the mountains. Between construction and corporatisation and all of it being unregulated, we have destroyed the mountains,” Iti Devi tells me. 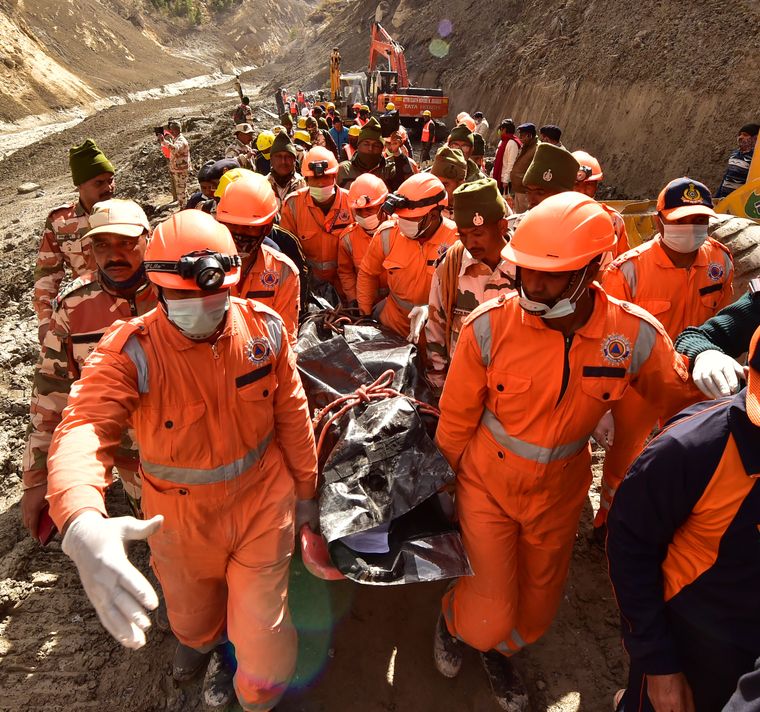 I witness what she is saying with my own eyes. Over years of coming to the mountains, I have never seen them this denuded, and frankly, this ugly. Everywhere we look, the mountainsides are being blasted, drilled and dug up. Buildings are coming up right on the Ganga. It is almost as if a collective death wish has plagued the state. Or the belief that whenever the next calamity strikes—as it will—it is something that will happen only to other people.

While we worship the Himalayas, we have conveniently forgotten what the data tells us. Even if dramatic interventions are made and global warming is reduced, a little over 30 per cent of the glaciers along the Hindukush Karakoram Himalaya ranges could melt by 2100. And if carbon emissions remain uncontrolled, then that number could rise further—the loss could soar to two-thirds.

But as we drive through mountains that look more like a wreckage site, stripped of both green cover and dignity, it is almost as if everyone is going through the hand-wringing motions in a formulaic sort of way. And, the basic lesson that the pandemic and lockdown first taught us has been lost again. A villager reminds me of what that lesson is. “We are meant to tailor our lives to the rules of the earth,” he says. “We cannot write the rules and make the earth live to our playbook. That is what the river is teaching us.”