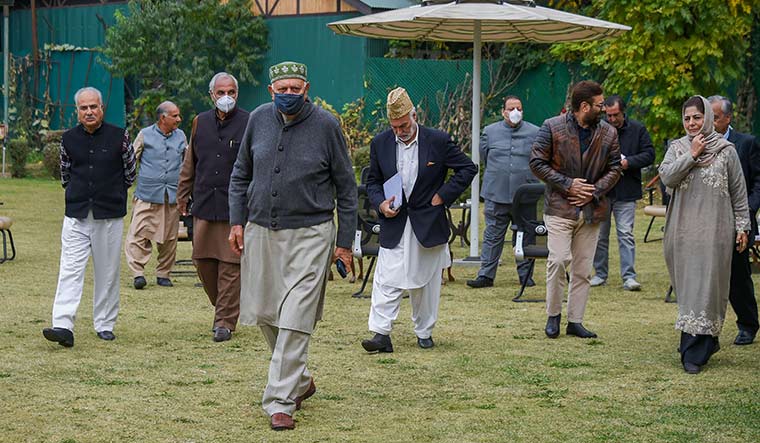 The big fightback: Farooq Abdullah and Mehbooba Mufti with other members after a meeting of People’s Alliance for Gupkar Declaration in Srinagar | PTI

FOR THE FIRST time since the revocation of Article 370 and the bifurcation of the erstwhile state of Jammu and Kashmir, major regional parties in Kashmir are returning to electoral politics. Elections to the newly-created District Development Councils (DDCs) are being held in eight phases from November 28 to December 22.

The 280 DDC seats—14 each in 20 districts—were created after the Union government amended the J&K Panchayati Raj Act in October. Elections will also be held to fill more than 12,000 vacant seats in panchayats and over 230 seats in urban local bodies.

The seven parties formalised the alliance this October with Farooq as president, former chief minister and PDP president Mehbooba Mufti as vice president and JKPC leader Sajad Lone as spokesperson. Initially there was a feeling that the alliance would boycott the polls, but on November 7, it announced the decision to join the fray.

The BJP said the “Gupkar gang” wanted foreign forces to intervene in Jammu and Kashmir. “The Gupkar gang also insults India’s tricolour,” tweeted Union Home Minister Amit Shah. “Do Sonia ji and Rahul ji support such moves?’’ Congress spokesperson Randeep Singh Surjewala denied that the party was a member of the alliance. His party's president in J&K, Ghulam Ahmad Mir, however, said the Congress had “district-level alliance" with individual parties of the alliance.

Former chief minister Omar Abdullah of the National Conference said he understood Shah’s frustration. “He had been briefed that the alliance was preparing to boycott the elections. This would have allowed the BJP and the newly-formed king's party a free run in J&K. We didn't oblige them,” Omar tweeted. The king's party jab was aimed at the JK Apni Party formed by former PDP leader Altaf Bukhari with the backing of the BJP.

Political observers said the decision of the alliance to contest the elections had disrupted the BJP’s plan to extend its reach to another layer of power in Jammu and Kashmir and render the National Conference and the PDP irrelevant at the grassroots. They said the alliance would win a major chunk of seats in the Kashmir region and pose a challenge to the BJP in Jammu with the support of the Congress. But it may not be easy. “A boycott or low turnout will cause problems for the alliance,” said an observer.

In the absence of a legislative assembly, the DDCs are likely to emerge as major power centres. Council members will get direct funding from the Union government for development work. Winners will also get a head start when assembly elections are held.

The BJP has named Union Ministers Anurag Thakur and Mukhtar Abbas Naqvi and the its national spokesperson Shahnawaz Hussain to oversee the campaign. South Delhi MP Ramesh Bidhuri, a prominent Gujjar leader, has been tasked with mollifying the Gujjar-Bakarwal tribes who are angry about the demolition of their hutments in the forests of Pahalgam.

The main plank of the BJP campaign continues to be the abrogation of Article 370. “The Congress’s alliance with the Gupkar gang proves beyond doubt that it is seeking support from those who seek the support of China and Pakistan to bring back Article 370,” said Thakur.

While the contest in Kashmir is largely between the alliance and the smaller parties and independents, the fight is more intense in Jammu. Some constituencies are even witnessing intra-family battles. Nadeem Azad and Mustafa Azad, nephews of Congress leader Ghulam Nabi Azad, are pitted against each other in Changa constituency in Doda district. At Kalkote in Rajouri, Anita Thakur and Sushma Thakur, whose husbands are brothers, are involved in a close contest.

The Union government has deployed 25,000 additional personnel of the Central Armed Police Forces to beef up security. Many candidates have been housed in cluster accommodations because of security concerns. Mushtaq Ahmed, the PDP candidate contesting panchayat elections from Khaigam in Pulwama, said he had not been allowed to go home since November 9. Another candidate said the police would sometimes ask them to finish their campaign and return to the hotel by 4pm. “How can we cover all the villages in our constituency and report back on time,” he complained.

Omar and Mehbooba said the government was locking up candidates opposed to it, using security as an excuse. “If the security situation is not conducive for campaigning, what was the need to announce the elections,” tweeted Omar. A senior officer, however, said the security threat was real. “This year, more than 12 political activists, most of them belonging to the BJP, were killed by militants,’’ he said.

Despite the high threat perception, the DDC polls have attracted many young men like Hamid Rather and Javid Ahmed. Rather, a 30-year-old doctoral scholar, is contesting from Pattan in Baramulla as an independent candidate. He said the elections presented an opportunity to better the lives of the people in his area. “I can't imagine women in our villages going out to fetch drinking water for their families,’’ he said. Ahmed said his motivation to jump into the poll fray was to combat the growing menace of drug addiction.

The active participation of the independent youth and the coming together of the regional parties may have foiled the BJP’s plan to push them to the fringes of the political landscape. But their participation in the DDC polls has not only lent credibility to the exercise, but also legitimised the administrative changes imposed in Kashmir. It will also help the BJP counter international criticism over its handling of the Kashmir issue.