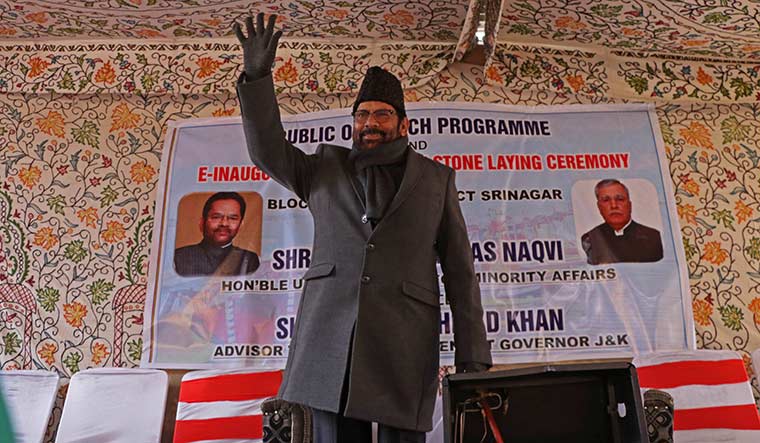 UNION MINISTER MUKHTAR Abbas Naqvi kickstarted the BJP's campaign for the local bodies elections in Jammu and Kashmir with a series of rallies and meetings in the Union territory. He drew crowds and listened to people's complaints about hardships due to the internet ban and the Covid-induced economic slowdown. He said people treated Article 370 as history and were asking what it had got them in the past 70 years. Excerpts from an interview:

What is your feedback from the state?

The biggest takeaway is the involvement of people in the political process. The elections are being held to the district development council for the first time in 70 years. People from far-flung areas, be it Uri, Baramulla or Kupwara, are participating in the process. This is a very positive message. The results will be good for the BJP. These elections will break the arrogance of the family parties. These parties thought people would not participate so they had decided to boycott the polls. But they were forced to change their stance when they witnessed the crowds. We see this as victory before the elections.

What does the BJP intend to achieve through these elections?

The (Gupkar) alliance leaders claimed that the BJP would not even find candidates in the valley. Today the BJP is contesting in more than 95 per cent of the seats. This has demolished their assumption. The BJP is getting, thanks to Prime Minister Modi, an enthusiastic response. People see him as a big world leader. The issues like communalism and separatism are in decline.

The Gupkar alliance is pitching for the restoration of Article 370. Is it an emotional issue for the people?

With the end of Article 370, over 370 problems of the people have been solved. All Central government schemes are getting implemented there. People have found this to be a very positive development. Article 370 has been buried 370 kilometres below the ground, and even 370 births will not bring this provision back. So, people are looking at Article 370 as history. The alliance may be raising the issue, but it is not finding any traction among people. People are asking what they have got in 70 years. Only political families gained.

Will these elections be a referendum on the Article 370?

It will be a referendum on people's participation in the democratic process. How strong and effective it is.

The BJP has always been seen as a Hindu party. Is the perception still the same in the valley?

Modiji's image is visible in the valley. People believe in him. The party has never indulged in communal campaign. People feel that development is happening without discrimination, and that they are getting empowered. All the schemes were implemented there. The impact is visible on the ground. People have isolated the separatists. In earlier elections, the separatists always played a role. But in this elections they are not to be seen.