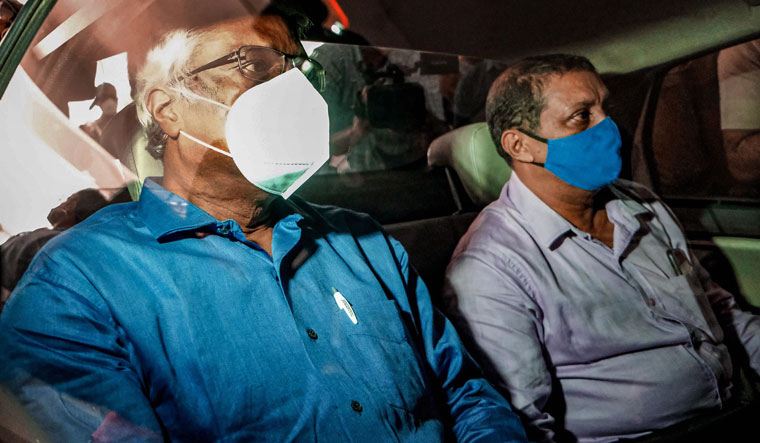 In the dock: M. Sivasankar (in blue shirt) being taken to a special court in Kochi | PTI

M. Sivasankar was clad in a crumpled blue T-shirt with red and white stripes when he was brought to the Enforcement Directorate office in Kochi on October 29, the same dress he was wearing when he was arrested from a hospital in Thiruvananthapuram the previous day. Looking dishevelled, he was a far cry from the dapper, all powerful principal secretary of Chief Minister Pinarayi Vijayan.

Sivasankar is currently in the ED’s custody in the gold smuggling case. The agency believes that he intervened to clear the diplomatic baggage containing smuggled gold at the Thiruvananthapuram international airport on behalf of Swapna Suresh, an accused in the smuggling case. Sivasankar had earlier appointed her in a key post in a project under the information technology department, although she did not have the required qualifications. The ED said Sivasankar shared confidential government information pertaining to major projects such as the LIFE Mission project with Suresh, which was used to swing deals.

Sivasankar, who joined the state service as a deputy collector, was conferred with IAS in 1995. He was handpicked by Vijayan when he became chief minister in 2016. As the chief minister’s principal secretary, Sivasankar wielded immense power and he ran many of the flagship projects of the government, much to the displeasure of some senior IAS officers. “The IAS power centres never treated him as an equal as he was a ‘conferred one’. So when he got power, he used it to the hilt,” said an officer in the state secretariat.

A retired revenue secretary said Sivasankar was a very able officer who left his mark in all posts he held. “I have worked very closely with him and I have never sensed any issues,” he said.

Even opposition politicians do not question Sivasankar’s efficiency. “The Sivasankar I know is a brilliant officer. He was a man of action and was good at clearing bottlenecks,” said P.K. Abdu Rabb, who was education minister in the previous United Democratic Front government. Former electricity minister Aryadan Muhammed, too, shared a similar opinion.

Sivasankar was not a stickler for rules. A retired IAS officer said he ignored procedures and was bothered only about results. And, he loved his drink. “It has been his weakness from the time he joined. He preferred to drink with his junior staff rather than with fellow IAS officers,” said a source.

“What is happening with Sivasankar reminds one of Shakespeare’s dramas,” said a former chief secretary. “It is so dramatic and tragic.”