The NDA is contesting on all seats together 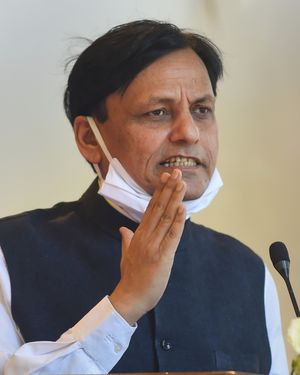 You promised jobs and vaccine in your manifesto. What is the feedback are you getting from the people?

The people of Bihar have made up their mind. They have decided that they will elect the NDA government in the state. The people want to give Nitish Kumar the post of the chief minister again. The NDA will form the government.

The feedback we are getting is while people may be supporting the BJP, there seems to be anti-incumbency against the chief minister.

There is nothing like this. All seats are of the NDA. NDA is contesting on all seats together, and they will win. The NDA will repeat the performance of 2010. People of the state are aligned with the name and work of our Prime Minister Narendra Modi. He is the epitome of development. Bihar and its CM Nitish Kumar have worked in tandem to bring about development. Bihar has been put on the road to progress. People of the state like development, and are not likely to be misled.


The NDA is facing stiff competition from the RJD-led grand alliance. How do you view them?

During these elections NDA leaders are comparing the 15 years of NDA rule with 15 years of Lalu Prasad Yadav rule. Does that have resonance, as now we have a generation which may not have seen that rule?

Please remember what happened during those years. The fifteen years (of Lalu Prasad Yadav) saw the collapse of all institutions and processes. There was no law and order. People started migrating. Unemployment increased rapidly, there was no electricity or roads, there were no schools or hospitals. People of the state had witnessed destruction. So, only when Nitish Kumar became CM that things started changing. Then we had development. And when Prime Minister Narendra Modi-led government came in power it followed a path of progress. Then the state joined hands with Modi's work. Hospitals were improved, so were schools. Both governments worked with each other; law and order were restored.


Do article 370 and CAA have resonance in the state?

BJP's resolve includes development, employment, development with self-respect and justice. Article 370 or other national issues have an emotional connect with the people. The people of the state are connected to them by themselves. When Article 370 was removed, people of Bihar accepted it as they were already aware of its implications. They knew that it was not good for the unity and security of the country. It was necessary to remove it to curb terrorism. This article was a hindrance in the development of Kashmir. It is on way to development.