Nitish and I were never on the same page 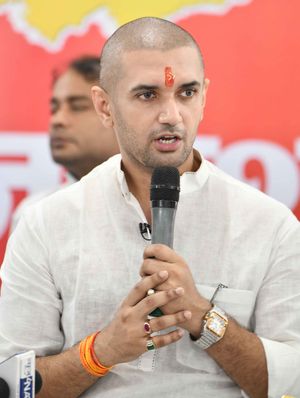 Q/You are in a hectic campaign just after a grave personal loss. How are you coping?

A/Papa (Ram Vilas Paswan) gave me the strength to cope. It happened at a time when my party and I were going through a crucial phase. When I needed him the most, he was not around. But he prepared me, and continues to give me strength. He taught me to never compromise with ideology. Every night I speak to him, I sit in front of him (his picture), and every morning I gather myself to face the world.

Q/Did he want you to walk out of the NDA alliance?

A/He used to instigate me, saying, ‘I contested independently [in 2005]; what is stopping you? You are young, intelligent and brave enough to face the consequences.’ He drafted the whole idea. We sat and discussed the ‘Bihar First, Bihari First’ vision document. He was in hospital, but even then we discussed it threadbare.

Q/But still, why walk out of an alliance that would have benefited you?

A/If I was to choose an easy way, I would have stayed. [When] I was part of it, the alliance was strong, but I cannot say that now after the LJP has left. Had we stayed, our strike rate would have been as good as [it was in the 2019] Lok Sabha elections (the party had won all six seats it contested). Our representation in the government would have been decent. But it was me who opted for a different path, a path of struggle. Even [Home Minister] Amit Shah ji said it was Chirag’s decision to go out of the alliance. I could not go ahead with a chief minister (Nitish Kumar) whose vision of development was against mine. He divided our state [along caste lines with] mahadalits and the extremely backward [castes], so I cannot associate with his kind of politics. At the national level, people are talking about jobs and metros, but in our state we are still talking about nalli-galli (building drains and streets).

We were never on the same page. Even my tag line says that my fight is not to rule Bihar, but to take pride in the state and our identity. That is why I have added ‘Yuva Bihari’ to my social media account names.

A/Nitish Kumar said he (Ram Vilas Paswan) could not have become a Rajya Sabha member with just two MLAs, so he needed support. He was talking about my father who had won Lok Sabha elections nine times, and has his name in the Guinness book of [world] records for the highest winning margin (1977 Lok Sabha elections).

Q/What is your campaign message, and what has been the response?

A/I have never witnessed [such a response] in assembly elections. The same enthusiasm was there for Modi ji during the 2014 elections. See how the youth are excited at my rallies. This gives me hope that the chief minister will not continue. I hope that it will be a BJP-LJP government in the state.

Q/Are you trying to steer your party away from its distinct dalit image?

A/It is not a deliberate attempt. By nature, I do not believe in caste politics. I do not think you can make someone [part of] a vote bank by giving them freebies; you [have to] target the root cause, which can then bring change. The chief minister says a dalit can get a government job only if a murder happens (the state government recently said that it would give jobs to the next of kin of any SC/ST person killed in Bihar). What kind of thought process is that? I repeatedly say that there is only one caste, and that is poverty.

Q/What do you prefer, state or national politics?

A/The reason I am in politics is my state. I [have lived and worked in] Delhi and Mumbai, [and] that is where I saw how Biharis were treated and humiliated. That was the time I thought that I needed to go back to my state and fight for it. Here, people are treated based on their castes, but when they go out, they are treated as Biharis, [regardless] of their caste. I use the word Bihari deliberately, so that people take pride in it.

Q/Will these elections be a referendum on the state or Central government?

A/Definitely on the state government. I do not remember if the chief minister ever travelled by road to meet people. He lands in a helicopter, goes to the stage, and says whatever he wants to without hearing [the people]. Even if there is anger in people, you do not give back anger; you listen to them.

Q/You have taken a gamble. What if the results go against you?

A/I am going to take responsibility for anything that happens, good or bad. It happened in 2014 also, when I supported Modi ji. At the time, no one knew that the NDA was going to come to power. I would not use the term gamble, but I have taken a bold step.

Q/What are your views on Tejashwi Yadav? Can there be a meeting of the minds now, or in future?

Q/The BJP says Nitish Kumar will be chief minister. If that alliance falls short, will you support it?

A/We will cross that bridge when we come to it. I do not think [Nitish’s] party will get sufficient numbers [for him to] be made chief minister.

Q/Some see you and your party as BJP’s plan B.

A/This is definitely my plan. I am targeting the chief minister; he has not delivered. He says Bihar cannot have industry as it is landlocked. So are states like Punjab and Madhya Pradesh. He lacks vision. He never drafted a single-window policy for investors or had an investors’ summit. There should be land reforms to set up industry. This is my plan and I am supporting the BJP and Prime Minister Modi, as he has the vision.