Several agencies are probing Hathras case, but how soon will justice be delivered? 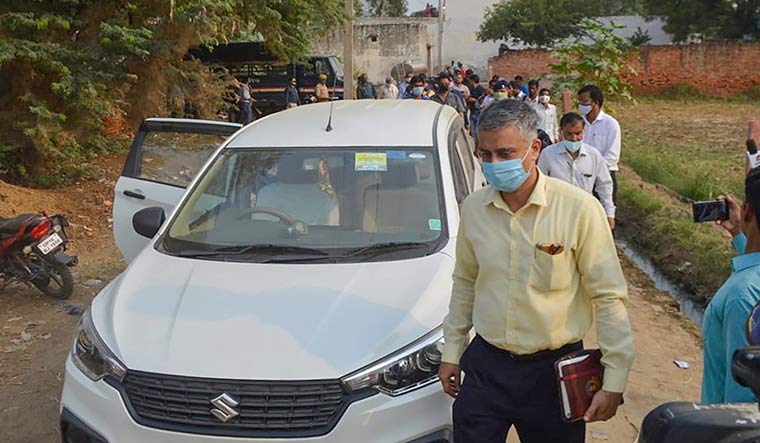 THE ‘OM’ TATTOO on her right hand, the black thread around the left ankle and a thousand dreams were burnt in the pyre of injustice on September 29. Three investigating agencies—the Central Bureau of Investigation, the Enforcement Directorate and the Uttar Pradesh police—are busy recreating the crime scene, collecting evidence and unravelling conspiracies hatched before and after the death of the 19-year-old dalit woman from Hathras village in Uttar Pradesh. She was brutally assaulted and allegedly gangraped by four men in millet fields on September 14. She was in a hospital bed with a broken back for two weeks. And her dead body was burnt into ashes by the police allegedly without the consent of her family.

What has played out in the past month was a political carnival of upper caste mobilisation in favour of the accused, dalit politics by mainstream parties, a frenzied media in the middle, and a state government smelling an international conspiracy behind everything. And what has taken a backseat is any effort to give justice to the victim.

While all three investigating agencies believe that the issue is linked to attempts to disturb law and order in the state, create social unrest and discredit the Yogi Adityanath government, the horrific crime that led to the death of the woman continues to be a mystery. The UP police are investigating a larger conspiracy allegedly hatched by some radical outfits to instigate caste and communal riots. More than a dozen sections of the Indian Penal Code have been invoked to investigate sedition, unlawful gratification, criminal conspiracy, illegal inducements and spreading false and defamatory news against some of the accused.

The ED is looking into allegations that radical groups had received international funding to create unrest; these groups were already under the radar of the agency for allegedly funding the nationwide protests against the Citizenship Amendment Act earlier this year. “The social media engineering in the Hathras case is under investigation, and we have found links with radical outfits which were collecting funds and asking protestors to gather at various locations,” said an ED investigator. The ED is said to have recovered digital evidence.

The Computer Emergency Response Team of India (CERT-In) has also been roped in to analyse the traffic on a website that was allegedly using the Hathras case “to collect money and stir social unrest”. Investigators said the website had earlier used the Black Lives Matter movement and Delhi riots to raise money, which was diverted to “antinational activities”.

On October 11, the CBI joined the bandwagon to probe the original case of the rape and murder. While none of these agencies has an answer yet, what seems to have passed hands is the responsibility to deliver justice.

The Department of Forensic Medicine at the Jawaharlal Nehru Medical College in Aligarh, where the woman was treated first, had told the police in a report on October 3 that there were no signs of rape, but there was evidence of physical assault with injuries on the neck and the back. Another report—by the Department of Forensic Medicine and Toxicology at the Safdarjung Hospital in Delhi, where the victim was shifted to before her death on September 29—said that there were scabbed abrasions on her neck, and bruising and fracture of cervical vertebra. Other samples and viscera were handed over to the investigating officer of the UP Police for chemical analysis.

Now that the case has been transferred to the CBI, the forensic and post mortem reports, hospital records, material and electronic evidence and samples collected for chemical analysis are the case property of the central agency. Teams of both the CBI and the ED have landed in Hathras.

The CBI is armed with the stringent anti-rape law drafted in 2013 after the gangrape of a woman in a moving bus in Delhi a year earlier. After the NDA government came into power in 2014, the home ministry carved out a separate women safety division, started distributing Sexual Assault Evidence Collection (SAEC) kits for collecting fingerprints and blood samples, set up a national database on sexual offenders and created an online portal called Investigation Tracking System for Sexual Offenders to monitor individual cases. A Directorate of Forensic Science Services was also created for collection, preservation and transportation of forensic evidence in sexual assault cases.

Prashant Kumar, additional commissioner of police (law and order) in Uttar Pradesh, said the SAEC kits and the electronic databases were available to his force. But a home ministry official admitted that there was still less focus on forensics and more on statements of accused and victims.

“The laws are adequate; the police have the infrastructure. But when governments want to suppress truth, it becomes difficult to get to the bottom of the case and the investigations go bust,” said K.T.S. Tulsi, senior advocate in the Supreme Court. Now that the Hathras case has been transferred to the CBI, he is hopeful of a free and fair investigation. “I hope the witnesses will have the courage to speak truth,” he said.

At times, judicial scrutiny also keeps police investigations on track. The Supreme Court on January 7 directed that a statement, when being offered as a dying declaration and satisfies all the requirements of judicial scrutiny, cannot be discarded merely because it has not been recorded by a magistrate or that the police officer did not obtain attestation by any person present at the time of making the statement. “I have no doubt that the dying declaration of the victim in the Hathras case is sufficient to invoke capital punishment,” said Tulsi.

The ball, once again, is in the court of the investigating agencies.