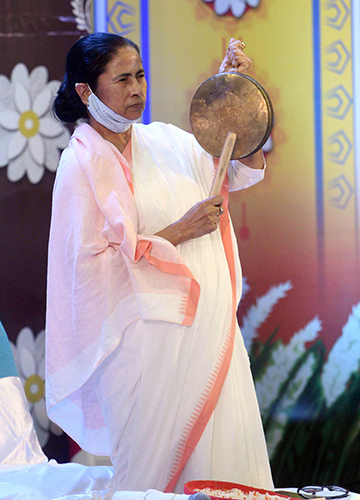 Bellwether moment: Mamata during the virtual inauguration of Durga Puja pandals in Kolkata on October 15.

IN JULY, WEST BENGAL Chief Minister Mamata Banerjee sounded a clarion call for those who had quit the ruling Trinamool Congress and joined the opposition BJP. “Outsiders won’t rule Bengal,” she said in a virtual rally, invoking Bengali pride against what she implied was a party of Gujaratis led by Prime Minister Narendra Modi and Union Home Minister Amit Shah.

Her speech apparently struck a chord. A good number of deserters heeded her call and returned to the Trinamool fold. Interestingly, so did scores of disgruntled BJP workers and mid-level leaders—many of them with an RSS background.

Around 100 former saffron supporters have already pledged support to Mamata in the assembly polls due next year. More are expected to follow suit. Prominent among those who have joined the Trinamool is Krishanu Mitra, a former saffron ideologue who was inducted into the party by Partha Chatterjee, the state’s education minister. “Mitra has three decades of experience in the RSS and the BJP. He will try to work with us now,” said Chatterjee at the induction ceremony.

A former BJP spokesperson, Mitra had been side-lined since 2016. According to him, the BJP has turned anti-Bengali. “It is trying to import something that is not part of this soil,” he said. More than a dozen BJP workers in Kolkata, North 24 Parganas and Midnapore have followed in his footsteps and joined the Trinamool.

The saffron camp appears unfazed. “These are just exceptions,” said an RSS pracharak in Kolkata. “The RSS is not a political party; its members can join any party that suits them. But for us, the BJP is the ideal choice.”

Mitra said young BJP workers are gravitating to Mamata. “Workers from all around Kolkata have been joining the Trinamool,” he told THE WEEK. “I cannot say the same about leaders, because the BJP hardly have leaders in Kolkata.”

Mitra was reluctant to talk about plans because he feared that the BJP’s IT cell “might use a reporter to elicit information from him”. Interestingly, Mamata herself has asked party workers to be wary of the machinations of the IT cell.

But that did not stop Shailendra Singh of Kharagpur from explaining why he had quit the BJP and joined the Trinamool. Singh is one of the four BJP leaders in the region who switched sides last month. He had been a close associate of Dilip Ghosh, state BJP chief and former Kharagpur MLA. Ghosh had vacated the assembly seat after he was elected to the Lok Sabha last year, and the BJP lost the subsequent bypoll. Singh, a prominent trade union leader who was part of Ghosh’s office in Kharagpur, said he was made a scapegoat. “Dilipda started avoiding me,” he said.

Singh said Ghosh did not help after he was arrested in a clash with Trinamool workers. “I came out of prison after talks with Trinamool leaders,” he said. “They helped me a lot. I was hospitalised during the clash; Dilipda came to Kharagpur, but did not visit me in the hospital. I decided to quit the BJP after that.” 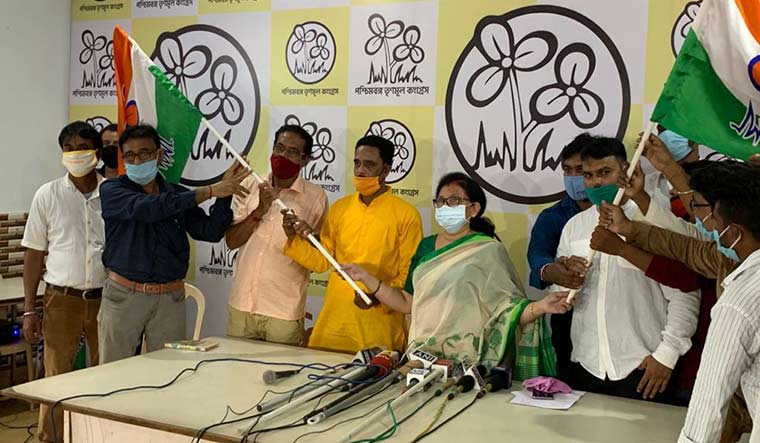 Around 100 former saffron supporters have already pledged support to Mamata in the assembly polls due next year. More are expected to follow suit.

Singh, however, said he was still in touch with the RSS. “I hold meetings with [RSS members] regularly. Mark my words: Many of them will support the Trinamool Congress in the assembly elections next year.”

Apparently, Mamata’s ‘pro-Hindu measures’—such as granting a monthly stipend to Hindu priests and 050,000 each to all Durga Puja committees—have impressed many an RSS worker. More than 70 BJP members in Jhargram, a Lok Sabha constituency that the BJP had won last year, have joined the Trinamool.

One of them is Kanchan Maity, who was the BJP’s district general secretary. Maity said the party began side-lining hardworking leaders like him after its good show in the Lok Sabha polls in the state. “We campaigned for months in the villages and powered the BJP to victory in the Lok Sabha polls. But the party refused to recognise our sacrifice,” he said.

According to Maity, the BJP’s district presidents have been behaving in a high-handed manner. “We, the trinamool (grassroots) leaders in the BJP are finding it tough to get access to state BJP leaders,” he said. “Of course, the party has grown big, but they should not have avoided the leaders who built the party.”

He said he still nurtures links with the RSS. “The ties with the sangh parivar is beyond politics,” said Maity. “I won’t say that [my relation with] the BJP will end because I joined the Trinamool. I have not criticised the party, but the party should not have forgotten its footsoldiers.”

Sources said political strategist Prashant Kishor, who is coordinating Mamata’s poll campaign, had eroded the BJP’s support base in constituencies that it had won last year. The alleged disconnect between the party and the sangh parivar (the RSS and Bajrang Dal, specifically) is also an issue.

The BJP, however, denies such problems. “This is a tiny political shift,” said Biswapriya Roychowdhury, the party’s state vice president. “These [desertions] are just a fraction of the number of people who are joining our party. Our spread has been spectacular. We have made inroads in areas where we could not hold a rally last year. Of course, Covid-19 has hampered our growth a bit. But we will overcome it.”