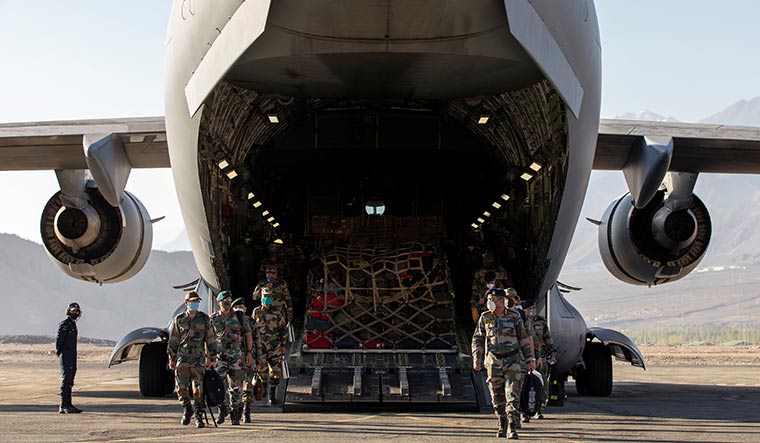 Call of duty: Indian soldiers disembark from a military transport plane at a forward airbase in Leh | Reuters

SIX MONTHS INTO his tenure as the commander of Leh-based Fire and Fury Corps (XIV Corps), Lt General Harinder Singh faced the biggest challenge of his career—the Chinese transgressions at the border. Since May, he has engaged with his Chinese counterpart five times, without much success. But, after the Army’s latest offensive action, which gave it control over dominating heights in the region, Singh has more bargaining power in his negotiation with the Chinese. However, the tension on the border is unlikely to be resolved by the end of his tenure; normally, a corps commander’s tenure is 12 months. Negotiations hardly yield immediate solutions to military stand-offs. It took nearly six years to resolve the Sumdorong Chu incident (1986), where India and China had come close to war.

Harsh Pant, head of strategic studies at Observer Research Foundation and professor of international relations at King’s College London, said: “India has wrested military initiative from the Chinese forces on the ground for the moment, but Chinese forces will be waiting for their turn,” he said. “There is going to be lots of turbulence going forward.”

But, after External Affairs Minister S. Jaishankar and his Chinese counterpart Wang Yi met on September 10, on the sidelines of a Shanghai Cooperation Organisation meet in Moscow, there is absolute calm on the border. A senior Army officer termed this “unusual”, given the experience of the past four months. There is apprehension that the People’s Liberation Army (PLA) is desperate not only to dislodge the Indian Army from strategic heights, but also to attempt to gain leverage in talks by taking other areas. As a result, Indian Army formations are on highest alert all along the border.

One major development post Jaishankar and Wang Yi’s meeting is that China’s statement, quoting Wang Yi’s remarks to Jaishankar, does not say “responsibility entirely with India”; earlier, this had been a key part of China’s stance. However, the joint statement does not mention “status quo ante”, either.

The eight fingers of Pangong Tso, where slopes of barren mountains jut into the lake (tso), has been a bone of contention between India and China since the early 1960s. Traditionally, India claims the territory till the easternmost Finger 8. But, both sides reached an understanding that India would control Fingers 1-4 and China 5-8. In the last fortnight, the Indian Army took control of dominating heights in the Fingers area, along with at least six other strategic positions; this would enable India to oversee Chinese movement.

An officer said that the action was in response to the PLA taking control over the ridgelines of Finger 4. “Indian Army climbed tough heights at the altitude of 19,000ft,” he added. This is nearly the altitude of some of the highest posts on Siachen—the world’s highest battlefield.

During talks, Chinese military had agreed to withdraw from Finger 4, but nothing has materialised. In the absence of a major breakthrough in the talks, the Indian military is prepared to face the harsh winter in Ladakh and, indeed, all along the Line of Actual Control. For the Chinese military, it would be the first experience of the difficulties of high-altitude deployment in sub-zero temperatures during winter. There is a belief that China may turn to cyber operations and a battle of perception in the winter.

Lt Gen (Retd) S.L. Narasimhan, member, National Security Advisory Board, told The WEEK: “Disengagement should be the immediate process, followed by de-escalation, which seems to be distant at the moment.” He added that it was evident both sides do not want escalation or war. But, he said, the number of troops the Chinese have brought into their depth areas and the Indian Army also mobilising equal numbers is worrisome. “Unless the complete de-escalation takes place in the depth area, one cannot be really sure of the situation,” he said.

Pant said that given the trust deficit between the two sides, it will be a long haul both at the border and in the broader normalisation of bilateral relations. “India has stood up to China in ways that Beijing perhaps was not expecting,” he said. “And India is likely to make decisions assuming the worst about China.”

Military planners believe that the mutual scramble for high ground and tactical advantage and the reports of warning shots being fired—the first gunshots along the LAC since 1975—indicate that the crisis is entering a more dangerous phase. Frank O’Donnell, non-resident fellow, Stimson Center South Asia Program, said that with firing of guns now becoming normalised, and tensions running high, the potential for an exchange of fire and casualties is increasing. “This in turn raises the risk of larger offensive military actions,” he said. He added that Chinese President Xi Jinping had publicised that there is an active military stand-off with India, meaning the political costs to him are high if he cannot hold the ground China has seized in perpetuity or exchange it for political or territorial concessions elsewhere. And India will not accept that, said O’Donnell. “This means China has very little room to back down from the position it is now in,” he said.

Lt Gen (Retd) Anil Ahuja, former deputy chief of integrated defence staff, believes that while Xi can signal intent, military operations of the magnitude that would be required even for a full-scale sectoral offensive require much mobilisation and preparation. “The professional acumen of the Indian military and political leadership lies in being able to realistically evaluate his build-up capability, monitor it and assess what he can do with that,” he said. “He is unlikely to be able to take any substantial punitive action against India with any degree of guaranteed success.” He added that Xi could assure the plenum (meeting of the Chinese Communist Party’s central committee) of holding India on tenterhooks till the next campaigning season and then attempt to “teach India a lesson”.