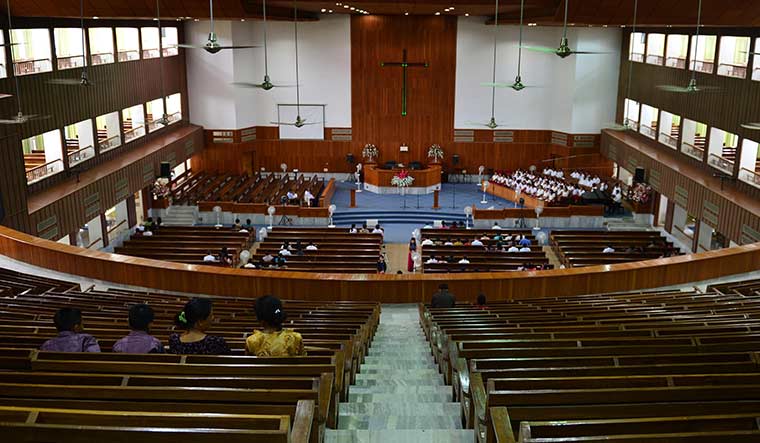 A Christian sect founded in China and banned by the Chinese government as a dangerous cult, is spreading fast in northeast India, say alarmed church leaders. The growing popularity of the Church of Almighty God, also known as Eastern Lightning, has forced various Baptist groups, the predominant Christian denomination in the region, to formally warn their flock and fellow church leaders countrywide.

The cult—established in 1991 by Zhao Weishan, a former physics teacher from Henan province in central China—says Jesus Christ has returned to earth in the form of Zhao’s wife, Yang Xiangbin. Zhao and Yang fled to the US in 2000 after the cult was banned and its members were targeted by the Chinese government. Chinese officials say Zhao and Yang have turned billionaires and live in a palatial bungalow in New York, spending millions of dollars to advertise their cult across the world, especially in Taiwan and Hong Kong. Yang is said to be protected by her female devotees and usually does not meet men. Her words are considered to be scripture by members of the cult.

When it was banned in 1998, the cult had close to three million followers. Members would conduct door-to-door campaigns, collect information about potential followers and, sometimes, “force” them to join the group. The campaigns sometimes turned violent like it did in 2014 at a McDonald’s outlet in Shandong province in eastern China. A woman who refused to join them was beaten to death by members of the cult. Two of the killers were sentenced to death for the crime.

The cult, which now has an active social media presence, is said to be spreading its influence in India’s northeastern states. In Nagaland, church leaders say it is becoming popular at a time when peace talks between the National Socialist Council of Nagaland (Isak-Muivah) and the Union government seem to be on the verge of collapsing. The church, which is working hard for the success of the talks, finds itself constrained by the challenge posed by the cult.

That the cult first entered Nagaland has been a cause of worry for the church, given the state’s past China connections. In the 1970s and 80s, Naga insurgents used to frequent China for ideological as well as arms training. Chinese influence among its cadre was so strong that the NSCN had to clarify in its constitution that although its preferred ideology was socialism, it would follow the theological principles of Christianity. The church now foresees another challenge from China, but a spiritual one this time. Zelhou Keyho, general secretary of the Nagaland Baptist Church Council, says the church is more worried about the growing influence of the cult among Christians in Nagaland. 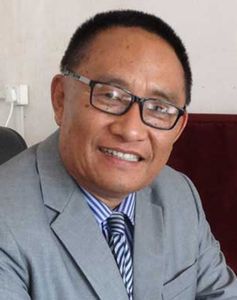 “This cult is aggressive, dangerous and can tempt young minds through its teachings. Its members are fundamentalists who do not believe in the Bible, but in violence,” says Keyho. He has written warning letters about the cult to churches across the entire northeast and also to church bodies in Delhi, Mumbai, Kolkata and Bengaluru, cities with a sizeable presence of young believers from the northeast. “We have asked them not to fall into the trap laid by the Chinese cult. It could destroy them,” he says.

Nagaland, Mizoram and Meghalaya are the three Christian majority states in the northeast; Manipur, Assam and Arunachal Pradesh, too, have significant Christian populations. According to the Baptist council, the Chinese cult is active through social media in all these states, although it is yet to find any evidence about physical congregations.

“They have created several chat groups on social media. In Nagaland, our study failed to find any physical congregation. But we fear that somewhere in the northeast or in the mainland, the cult has created a congregation,” says Keyho.

Alarmed by Keyho’s letter, the Council of Baptist Churches in Northeastern India, an umbrella organisation of the Baptist churches in the region, has started assessing the threat posed by the cult. Keyho says the non-Christian-majority states have been slow to respond, but are now stepping up their efforts. “Manipur has swung into action already, sending alerts,” he said.

W. Konghar, general secretary of Manipur Baptist Convention, says a similar cult based in South Korea was found to be active in the state last year. “That cult, too, was quite belligerent and propagated an unusually aggressive concept. I wrote about the danger it posed and asked people to stay away,” he says. South Korea is a popular destination for students from Manipur and Nagaland, and Korean cuisine is popular in the region. Such cultural influences, church leaders fear, could allow cult members to attract and cultivate vulnerable youth.

When the Church of Almighty God was banned by China, many of its members took refuge in South Korea and Japan. Some moved to the US and Europe. After social media became popular and accessible, members based abroad started preaching to people back home, posing an ideological challenge for the Chinese government and the communist party.

Critics of the Chinese regime believe that the cult and its popularity is a reaction to the relentless oppression of Christians in China. They feel that the cult would have died a natural death but for the systematic persecution, including torture chambers—called shelter homes by the authorities—where arrested cult members were imprisoned for life. The harsh measures appear to be a message to Chinese Christians as a whole, to demonstrate that China will never tolerate the practice and propagation of Christianity.

Says Wati Aier, eminent scholar and Baptist church leader from Nagaland, “Christianity has always had a stake in China from the time of Chairman Mao. Persecution of Christians is nothing new. But there is an attempt to link the banning of this cult with the persecution of propagators of Christianity. The two, however, are completely different.”

Keyho says the Baptist council sympathises with the oppressed Christians in China. “Underground churches in China are facing a difficult time. But we have to differentiate between a cult and the church. We are against China’s aggression against Christianity and we demand that it stop persecuting churches. But that does not mean we will support an anti-Christian cult like the Church of Almighty God.”

Keyho and other church leaders believe that the cult sees India as a soft target as teams based in South Korea, Japan, Malaysia, the US and the UK are actively engaged in targeting Indians. “My colleagues told me that they had received chat requests from cult members. They sound very loving initially and there is no aggression when they approach you first,” says Keyho.

With the situation becoming alarming in Nagaland, the governor has been apprised of the potential crisis. “If needed, we will ask the Central government to ban such disturbing websites and chat apps in the northeast,” says Nagaland Deputy Chief Minister Y. Patton, referring to the social media campaign of the Chinese cult.

Keyho says the biggest problem with the Church of Almighty God is that it prefers to use force to make people accept its philosophy. “The cult is completely against our faith and beliefs and even contradicts the philosophy enunciated in the Bible,” he says. “It preaches something called the third testament (some reports say the cult wants the Bible to be replaced by the third testament revealed by Yang). That is completely wrong. When it cannot force someone ideologically, it unleashes violence.”

Mizoram, another Christian majority state in the northeast, has adopted a wait-and-watch policy. “We are yet to start any investigation on whether the Church of Almighty God is having any effect on our state,” says K. Lalrinthanga, president of the Baptist Church of Mizoram. “But yes, we have observed that some of our youth are quite indifferent to our church activities. As of now, we are not seeing much trouble. But, of course, we will take up the issue once the Covid-19 pandemic gets over.”

The Baptist church in Arunachal Pradesh says the state is unaffected by the influence of the cult so far. “The Baptist council has taken up the matter seriously. So we will be cautious. We have been spared so far because of our limited internet connectivity,” says Changa Chippo, general secretary of the Arunachal Pradesh Baptist Council.

Aier says the cult has spread all over northeast and it is not something new. “The only new thing is that we have now taken serious note of it,” he says. He says such cults are formed with a small group of people, but have charismatic leaders. “It is emotionally exciting and the members can be swayed,” he says. Aier says such cults from China can spread across the world and wants church leaders to step up and educate society about their dangers.

“China is a communist state and it requires all its citizens to owe allegiance to communism. So, not only Christianity, but other religions are also getting persecuted,” says Wongkhar. “But, in India, it is our duty to see that our boys do not approve of this kind of Christianity. Such cults are alien to our country.”