Herd immunity could kick in across big cities, but vaccines will be the safer bet 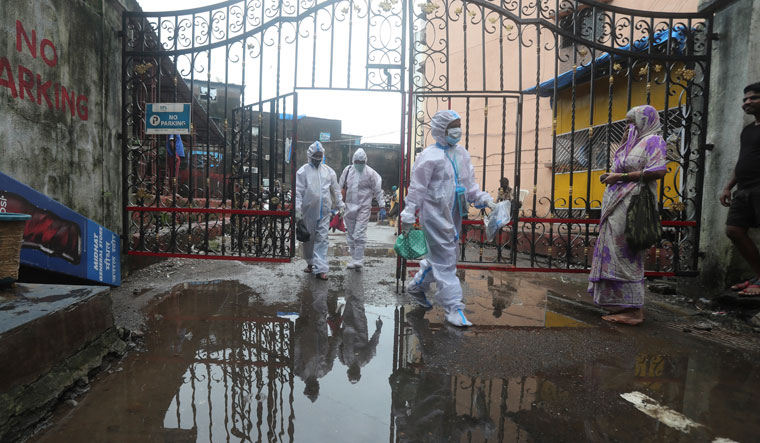 Recent Covid-19 sero-surveys done in major cities such as Delhi, Mumbai and Ahmedabad indicated that a large number of people have already been infected in each of these densely populated cities. In Delhi, the numbers suggested that 22.86 per cent people had already encountered the virus; in Ahmedabad it was 49 per cent. Mumbai results showed a wide variation of 16-57 per cent in non-slum and slum areas.

Large numbers of infections, mostly asymptomatic and relegated to specific areas within these cities, have triggered a debate over its implications for Covid-19 management, as well as the optimistic, wishful scenario of attaining herd immunity.

So, are those in large cities at least closer to being immune?

In Delhi, the infection had spread fast in a couple of months, according to results of the two sero-surveys, said Dr Jugal Kishore, head of community medicine, VMMC and Safdarjung hospital. The first all-India sero-survey done by ICMR indicated 12 per cent people had antibodies in the month of May, and the one in July suggested 22.86 per cent had antibodies in June, Kishore said.

Kishore said that herd immunity was a possibility, given the extensive spread of the disease. But he added that in a city like Delhi, the number of cases were coming down, indicating that the city had crossed its peak. Other factors such as innate immunity may need to be studied to understand the disease better.

“If the infection continues to spread across the country at this rate, and the vaccine comes after six months from now, the question of whether our population should be immunised will have to be addressed,” said Kishore. “In the case of H1N1, the vaccine came after the peak had passed, and many people, including doctors, did not take it. The vaccine was underutilised.”

Immunologists, however, say that it may still be too early to read too much into the sero-survey data. “Herd immunity is not a goal; it is an outcome. We cannot plan for it, but we can certainly plan for mass vaccination programmes,” said Dr Satyajit Rath, faculty member, IISER, Pune and former immunologist with the National Institute of Immunology. Rath said that those trying to make sense of the sero-survey results were at risk of “over-interpreting” what was essentially insufficient data. “Complex questions of immunity and disease spread are being interpreted politically and geographically, in terms of sero-survey results,” he said.

A sero-survey essentially looks for a certain kind of antibody (IgG) and sero-positivity only confirms that an individual has encountered the virus in the past. But Rath said it was hard to say whether these antibodies could also offer protection. “Besides, we know that from a study on 90 people in the UK that there is evidence of waning antibodies in three months,” said Rath. Antibodies could also help enhance the disease, as in the case of the dengue virus antibodies, he added.

Dr Vineeta Bal, professor, IISER, Pune, says that sero-surveys give credence to the hypothesis that a majority of the infected being asymptomatic had sailed through the infection and are now unlikely to spread it further. “In a city like Delhi, 50 to 60 per cent of people would have to test positive before herd immunity could kick in,” she said. But Bal says that vaccination is a better approach to attain the robust immunity levels, given the uncertainty around antibodies.

Waning antibodies, however, did not imply that the body's immune response is not at work. Immunologists across the world are studying the role of cellular immunity, or T-cell immunity in Covid-19. Immunity, say experts, can either be innate (quick, non-specific), or adaptive (long-term, specific). “Results of the Oxford vaccine phase two trial indicate that the vaccine has shown antibody and T-cell responses,” Rath said.

Tests used during the sero-surveys only measure antibodies, but not the T-cell responses. T-cell responses are also difficult to test, require expensive equipment and are resource intensive, experts say.

Herd immunity varies for different infections in terms of immunological correlates. “For instance, we can have a herd immunity against measles virus in a population when almost 90 per cent of the population has gained immunity,” said Dr Sunit K. Singh, professor, molecular immunology, Banaras Hindu University. “For SARS-CoV-2, however, experts think that it can be achieved once about 70 per cent of the population is infected. With other infections, it is also normal that neutralising antibody titers [the level of protective antibodies in a person’s blood] go down once the pathogen gets cleared but the immunological memory remains, and the levels go up again once the body encounters the pathogen again.”

A top health ministry official involved in sero-surveys conducted by the Central government told THE WEEK that questions from longevity of the antibodies to immune responses were still not understood fully. “This virus is too new for us to make these assessments,” said the official, also an expert in infectious diseases, speaking on the condition of anonymity. He said that the policy implications of sero-surveys were significant. “In Delhi, we are past the peak, and now, if we get to know that the infected population is about 40 per cent, we know we are on the right track,” he said.

“Does that mean herd immunity is being achieved? There are too many factors, starting with how the situation may change over the next few months,” said the official. “Then again, each city has a different texture, so sporadic data from certain areas cannot be used to make sweeping assessments. In my view, the only way to tire out the virus is by taking all necessary precautions.”