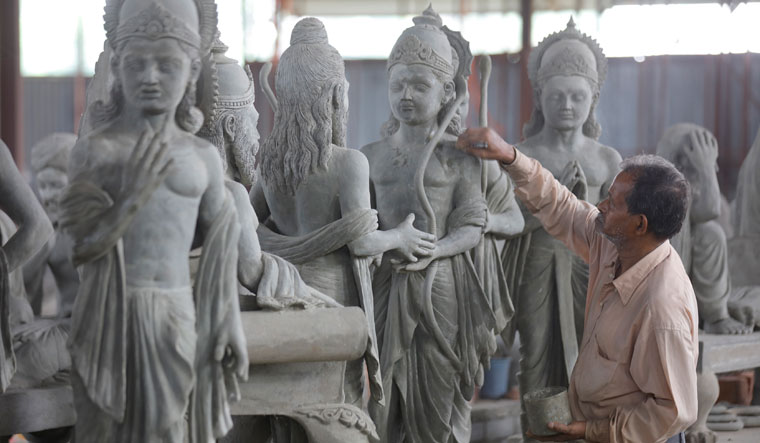 Work, worship: An artist from Assam gives finishing touches to idols at Ram Katha Kunj in Ayodhya. These idols will find a place at the Ram temple | PAWAN KUMAR

A barely palpable excitement courses through Ayodhya as it readies itself for the bhoomi pujan (ground breaking ceremony) of the Ram Janmabhoomi temple on August 5. Municipal corporation vans weave their way through the narrow lanes, asking residents to participate in a quick beautification of the town that is readying itself for the biggest event since the demolition of the Babri mosque.

While Covid-19 has scaled back the celebrations, there is muted criticism among Ayodhya’s seers of the way things are panning out. A new body, the Shri Ram Janmbhoomi Teerth Kshetra Trust (SRJTKT), is managing the show, while older ones such as the Nirmohi Akhara have been pushed to the background.

It is a disappointment that is not voiced directly. Ambrish Singh, regional organisational secretary, Vishva Hindu Parishad (VHP), said that while his organisation’s focus is the Ram temple, it has many other tasks to carry out such as the protection of cows and stopping religious conversions. “We will initiate a mass contact programme to ensure the emotional connect of Hindus with the mandir as decided by the trust,” said Singh. But it papers over the fact that the VHP old guard, which has long been at the forefront of the Ram Janmabhoomi movement, has been sidelined since the formation of the SRJTKT.

This body was announced on February 5, as directed by the Supreme Court judgment on the title suit. According to the gazette notification on the formation of the SRJTKT, it bears powers ‘including construction of the temple and all necessary, incidental and supplemental matters thereto’.

Champat Rai, vice president, VHP, is the general secretary of this new trust. Rai was blooded into the Rashtriya Swayamsevak Sangh (RSS) as a child and has been an active member of the VHP and the temple movement since 1991. He is the authorised spokesperson for the SRJTKT, but rarely speaks to the media and his communication with the old guard of the temple movement is also erratic. As a result, rumours about the temple—for example, one about a time capsule being placed in the temple’s foundation, which Rai later shot down—float freely. A member of the old guard said: “We know only as much is out in the newspapers. All the manpower and material power now rest with Rai. We are nothing.” 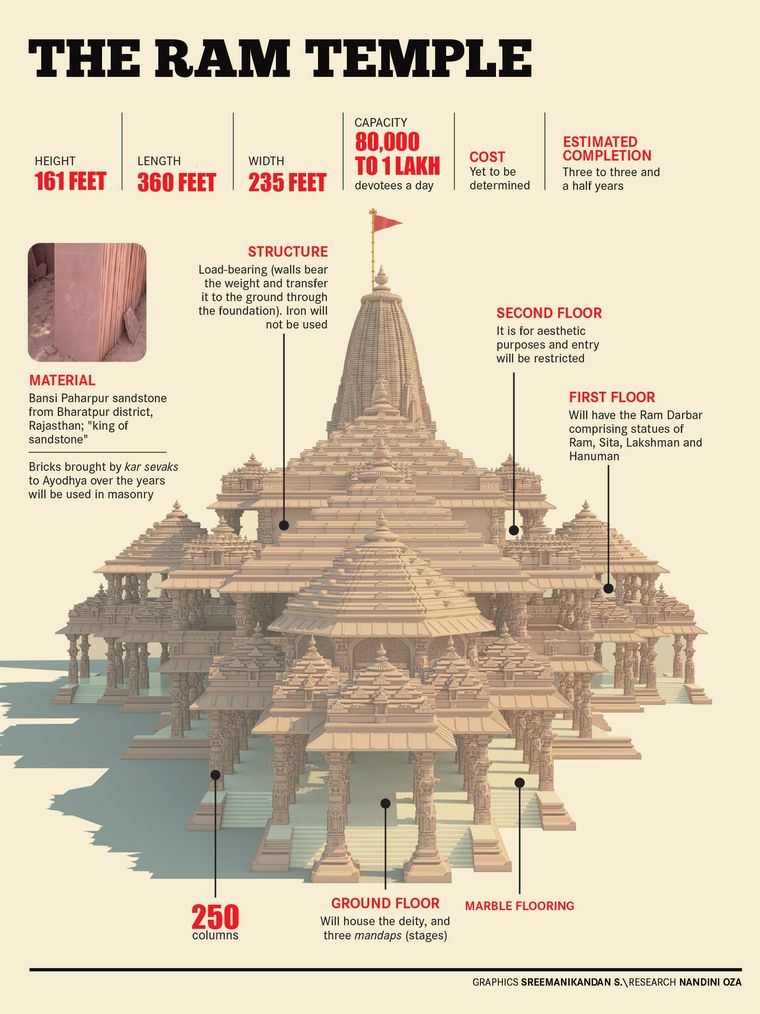 Mahant Nritya Gopal Das, chairperson of the SRJTKT and head of the Ram Janmabhoomi Nyas, a trust formed in 1993, was not part of the original list of appointees to the new trust. He had openly questioned the need for a new trust. This stemmed from the guiding principle of the temple movement that went: Mandir wahin, masjid nahin, jin patharon ko santon ne sweekar kiya unse hi mandir nirman (the mandir there, no mosque, the mandir to be built from the stones accepted by the seers). Though Das’s current position as chairperson is held to be largely ceremonial, he dismisses any talk of discontent. “All this is just a figment of malicious imagination,” he said.

The proposed temple is bigger than the one that was planned earlier. It will have one shikhar (spire) surrounded by four mandaps (congregation halls). It will be 161ft high, as against the initial height of 128ft. The area of the temple was to be 140ft by 268.5ft. This will now be 235ft by 360ft. While the original structure required 1.75 lakh square feet stone, the requirement is now 3.5 lakh square feet.

While no one denies the need for a grander temple, many fear they will not live to see it. Among them is Anant Rai, who is in charge of the Nyas workshop, where the pink sandstone pillars rest. Rai, now 80, has been at the workshop since 1990, living in the cramped quarters on its premises. “We have enough pillars for one floor,” said Rai. “Those for the second were to be carved when the first would be constructed. Now there is double work to be done. The only way that will happen in my lifetime is if the work is contracted elsewhere.”

Ayodhya is undergoing a limited facelift ahead of the bhoomi pujan. The pillars and beams of the railway overbridge at Naya Ghat have been painted brightly. Shiv Narayan Singh, a local artist, said he had chosen Hindu symbols such as conch shells and chakras against a background of rainbow colours. “I have not painted any deities as the pillars will be desecrated by animals and humans,” he said. Singh is also tasked with a few other paintings for the town but is unsure of how much he will be able to complete. “I have not been paid since March, so work has been even more difficult,” he said.

The overall charge of priming the Janmabhoomi has been given to Dr Ram Manohar Lohia Avadh University in Faizabad. Manoj Dixit, vice chancellor, said that a rangoli of flowers will be made at the site and 1.25 lakh diyas will be lit there and at other prominent spots. “We will create a three-dimensional effect with the diyas, maybe write Bhaye Pragat Kripala Dindayala (The Lord has appeared from the Ramcharit Manas) with them,” he said. 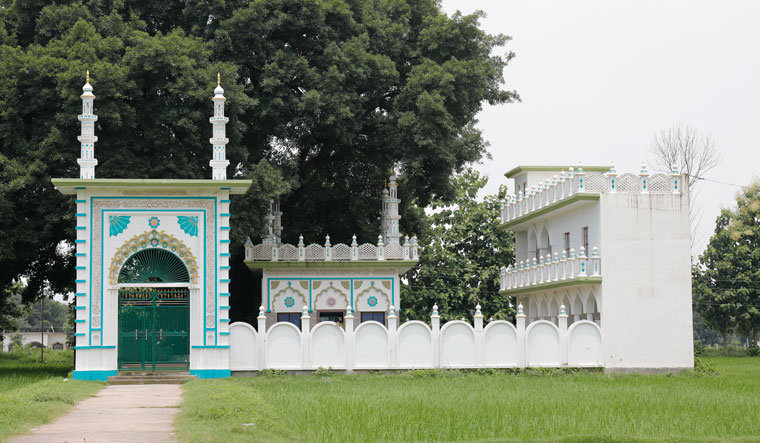 In the offing: The plot in Dhannipur village where a mosque is planned to be constructed | PAWAN KUMAR

About 25km away from the temple site, on a dirt road that leads to the village of Dhannipur is the five-acre plot that was given to the Sunni Central Waqf Board. The land houses a shrine to a local seer called Sharda Baba. Abdul Majid, who runs a sweetmeat shop in front of it said that he has not seen anyone visit the site since the allotment. “Some weeks ago, government officials came and planted rice on it,” he said. In Dhannipur, residents are firm in their belief that no prayers offered to the seer go unanswered. Every April, the death anniversary of Sharda Baba draws devotees from afar.

Syed Mohammed Shoeb, CEO of the board, said they were yet to get physical possession of the land. On July 29, in a sudden move, probably prompted by the bhoomi pujan, the board announced the setting up of the Indo-Islamic Cultural Foundation (IICF) “for building the mosque and other facilities for the benefit of the general public”. The plan, it said, is to construct a mosque the same size as the demolished one, along with medical and health facilities, a community kitchen, a research centre, a museum, a library and a publishing house.

Minor irritants to the bhoomi pujan, which will be beamed live by Doordarshan, have sprung up. One is in the form of Kunwar Mohammed Azam Khan, who leads a body called the Muslim Kar Sewak Manch. “Ram is our seer as well for we have converted from Hinduism,” he said. “Muslims have as much stake in the mandir and this should be recorded so that years from now controversy does not erupt. The temple should be a symbol of communal harmony. If not invited to the bhoomi pujan, I will drown myself in the Sarayu.”

Meanwhile, an undeterred Ayodhya ambles towards its big date with a destiny that has eluded it for years.