In Ladakh, what is India's plan in case disengagement plans with China fail? 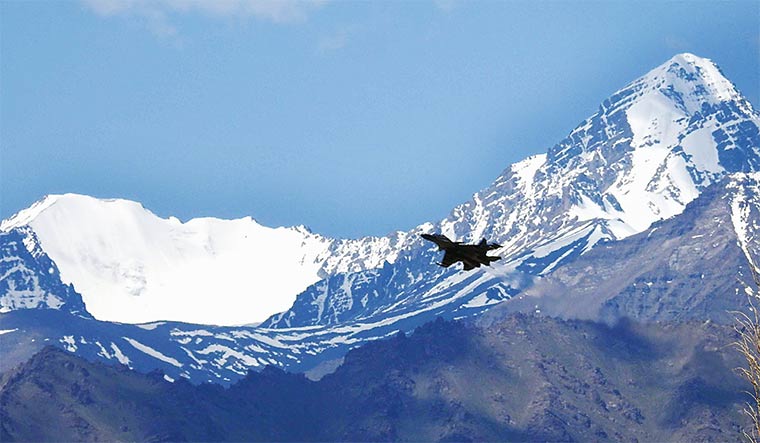 Keeping vigil: A Sukhoi during a sortie in Ladakh.

The Chinese should be thrown out from the territory which does not belong to them at all. Our military should give them a strong response,” said Ghulam Nabi Galwan, the grandson of Ghulam Rassul Galwan, who discovered the Galwan valley in 1899. The valley, located nearly 200km from Leh, saw a fierce clash between Indian and Chinese forces on June 15, in which 20 Indian soldiers lost their lives. The region has become the epicentre of the ongoing Sino-Indian clashes in the western sector of the Line of Actual Control (LAC) in Ladakh.

With the standoff continuing for more than two months, Ladakhis are hoping for a ‘tough’ response from the Indian military, which will help wipe out bitter memories of 1962. In Ladakh, all roads to forward areas are sealed. No movement is permitted beyond the Army’s 3 Infantry Division headquarters in Karu, nearly 30km from Leh. The division is in charge of eastern Ladakh, including the flashpoints with the People’s Liberation Army (PLA). Telephone lines beyond Leh have been cut for security reasons, causing panic among relatives of those who live close to the LAC. All inner line permits, too, stand cancelled.

For Ladakhis, the border tensions have come at a time when the region is struggling with its fight against Covid-19. According to the Union territory’s health department, there are now 115 active cases in Leh and 65 cases in Kargil district, but all patients are stable. No new cases have been reported in the past couple of days.

While there is some good news on the Covid front, the border situation is making Ladakhis anxious. The last time they were on such a state of heightened alert was in 1999, during the Kargil war against Pakistan. China, however, poses a far bigger challenge, and the military planners know it. Every single day, nearly 150 vehicles of the Army and the Indo-Tibetan Border Police move towards forward areas, passing through Leh, the headquarters of the Army’s XIV Corps, which was raised after the Kargil war. 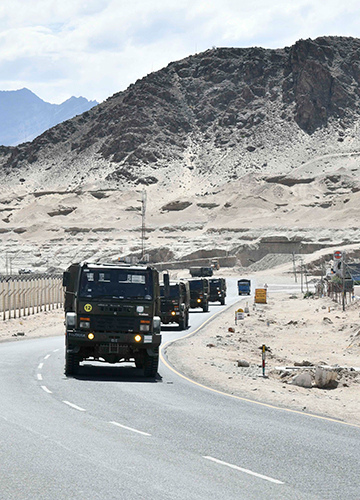 PLA incursions are not new for Ladakhis. The situation got out of hand this time because the enemy moved aggressively across multiple locations. And, after the Galwan clash, the fear of war is in their minds. “The Chinese have never been our friends,” said P.T. Kunzang, president of the Ladakh Tourist and Trade Alliance. “They betrayed us in 1962 and took away Aksai Chin. Now they want to take away our land in Pangong Tso and Galwan, which was never contested.” Kunzang said more than 70 per cent of the Ladakhi households were dependent on tourism, which provided revenues up to Rs600 crore a year, and any instability along the border would be a big blow for them.

In Leh, authorities have shut down everything except shops selling essential goods. All vehicular traffic is banned. An eerie silence envelopes the city which is broken only by the sound of the Indian Air Force aircraft. Fighter jets make frequent sorties, while heavy lift aircraft like the C-17 Globemaster and IL-76 ferry tanks and mechanised elements from the western sector. This is a first in the region, since 1962. To boost its deterrence, the Army has sent the newly-inducted T-90 tanks, although three armoured regiments are already based in Ladakh.

After intense parleys, disengagement has started on the border, but the process has been excruciatingly slow. India has already deployed one lakh troops in eastern Ladakh, beefing up security along the 826km-long LAC in the region. Enhancing road connectivity in eastern Ladakh is a key priority, with infrastructure projects worth Rs20,000 crore, including 30 permanent bridges, picking up speed. The Changthang region, which includes Darbuk and Nyoma sub divisions, is the most crucial one for road infrastructure. Sensitive areas like Galwan, Chushul, Shyok, Demchok and Chumar fall under Darbuk and Nyoma.

Unlike in 1962, the IAF has increased its presence on the border, especially aftet the PLA further strengthened its deployment following the Galwan clashes. Additional deployment of fighter jets like Su-30 MKI, MiG-29K and Mirage-2000 alongwith the newly-acquired Apache and Chinook helicopters, are maintaining operational readiness with frequent sorties close to the border. With its array of modern electronics, the Apache is considered to be one of the most advanced combat helicopters. Its air-to-air missiles are capable of detecting up to 256 moving targets and engaging them. Over a dozen squadrons of fighter jets have landed at the Leh military base to give more teeth to the IAF. “We have been training for the last 45 days to support the Army for any offensive operation,” said a fighter pilot. 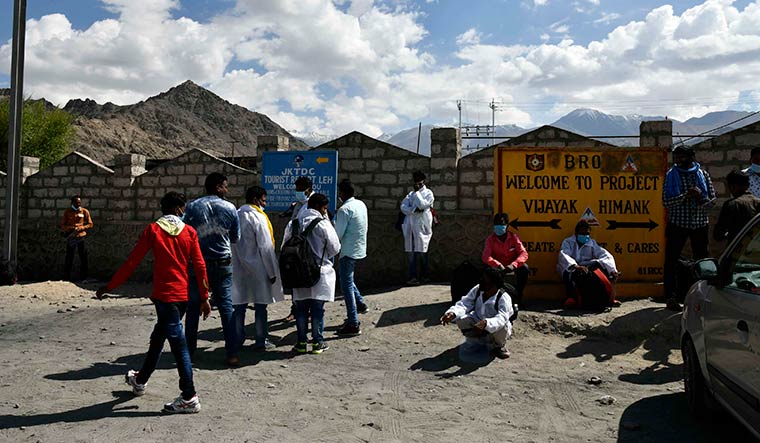 Movement of air assets to Ladakh conveys an impression that air power will play a major role in any likely military action by India. According to sources in the military establishment, high mountain warfare has an operational window, which is the period between August and October. “Military buildup on the border could be an indicator,” said a military observer. “We can surprise the enemy by launching an offensive in this period. Weather and terrain give you an operational window to carry out any offensive mission. Both sides are worried about this.” India and China are preparing for the long haul, as the process of disengagement, if it indeed goes through, will take at least three to four months. Moreover, the trust deficit will force India to continue with its deployment during winter, when the Ladakhi highlands get disconnected from the rest of the world.

Amidst military preparations, residents of the border villages say the Chinese often intrude into their territory and usurp their pastures, the Ladakhi highlands famous for the Pashmina goats. While the Galwan valley is uninhabited, it is used as a winter grazing ground by nomadic communities to feed their livestock. These nomads are being pushed back from forward areas. 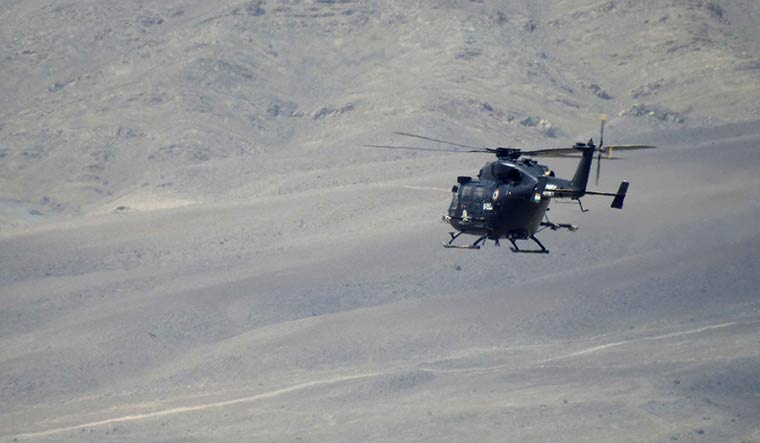 On guard: A Dhruv helicopter during a sortie in Ladakh.

Namgyal Darbuk, a local resident and a former councillor, said the Chinese always sent their nomads first, and their troops next. “Indian security forces do not allow our nomads to move forward. Moreover, urbanisation of nomads has helped the Chinese grab our pasture lands. The nomads are coming down to the town, leaving behind their land on the border villages,” said Namgyal. “Urbanisation of nomads is giving an easy option to the Chinese to expand their territory and many nomads have joined the tourism sector for easy money.”

Locals worry that if Pangong Tso and Nubra valley, the main tourist attractions of the region, remain affected, the economy will suffer. Ladakh became a popular tourist destination after the 2009 Bollywood hit 3 idiots. “Ladakh is the most neglected part of the country despite its strategic importance. There is no electricity in our border areas. We are totally dependent on solar plants,” said Namgyal. He said that in the ongoing conflict in the Galwan valley, India lost nearly three square kilometres of pasture land. 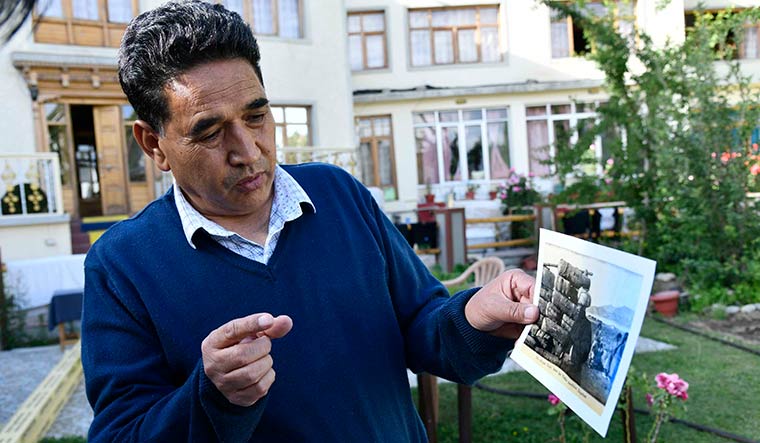 Talking about the Chinese expansion in the region, a Ladakhi said although the 3 Infantry Division was also known as the Trishul Division, none of the three mountains shown on its insignia were with India. “Those were in the Chushul area and the Chinese have captured all those mountain ranges,” he said.

Captain (retd) Tashi Chhepal of the Ladakh Scouts, an infantry regiment of the Army, said he was surprised that the Chinese managed to usurp Indian territory, which he once used to patrol with his colleagues. Chhepal, who was awarded Vir Chakra during the Kargil war, said the Army should raise more battalions of the Ladakh Scouts to deal with the situation as Ladakhis were familiar with the terrain and the environment. But Ladakh Scouts are not being deployed on the frontline with China as Chhepal suspects the Army does not have complete confidence in them.

“The Chinese troops always pay special attention to Ladakh Scouts during flag meetings. They click pictures with us and give us gifts. I think it raises some suspicion among personnel from other units. They doubt our loyalty,” said Chhepal. “Most Ladakhi soldiers feel that the Army do not trust them.”

Strategic expert and former diplomat P. Stobdan, who hails from Ladakh, said the region had been facing trans-border problems for centuries. “Ladakhis fight for pasture land and border demarcation. Now, unfortunately, a middle way has been found, like a compromise formula,” he said. Stobdan wants India to enhance connectivity projects in Ladakh with a forward objective to push for trade beyond the Karakoram pass into the Mazar valley of China’s Xinjiang province and revive the old Leh-Kashgar Silk Road.

Ghulam Nabi, however, is in no mood for a compromise. “We are tired of giving away our land to China,”he said. “Time has come to teach China a lesson.”