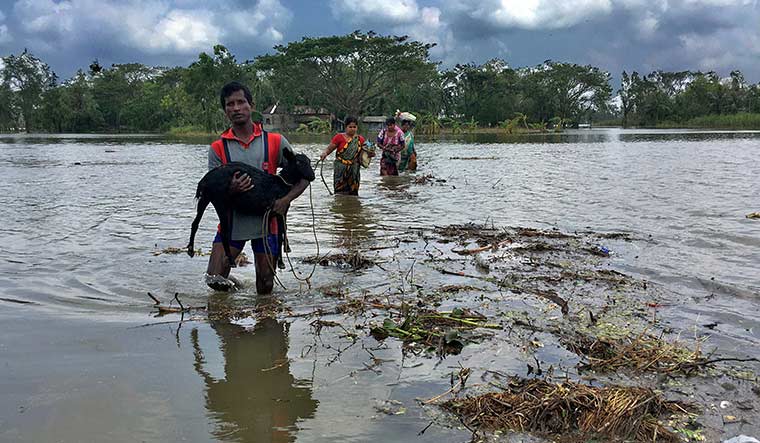 For five days now, Shova Mondol, a resident of Sonarpur town in South 24 Parganas district, has been living without electricity and drinking water. The district, along with North 24 Parganas and Purba Medinipur, was the worst affected after super cyclone Amphan lashed the south Bengal coast on May 20. What makes matters worse is that these districts are also Covid-19 hotspots.

But Amphan has made people throw caution to the winds. Ignoring physical distancing norms and the fact that her husband works for the state health department, Mondol joined her neighbours in blocking the Eastern Metropolitan Bypass, which connects Kolkata’s north to the south, on May 24. The police used force to disperse the crowd. “We wanted water and electricity, instead we got lathis,” said Mondol.

Not far away from Sonarpur, where many people lost their houses in the cyclone, lies Baruipur. Local resident Kanak Mukherjee, an employee of a public sector undertaking of the Central government, is a harried man. The approach road to his house is gone, so is the roof shed of his terrace. The toilet, too, is a shambles. But what worries him the most is the lack of drinking water. His mother suffers from a kidney disease and requires pure drinking water. All she gets now is a bottle of water from a pond. Though Kanak filters the water, nephrologist Aveek Barman said that it was dangerous to give that water to a kidney patient. “Her creatinine level would jump manifold and that would hit her heart,” he warned. 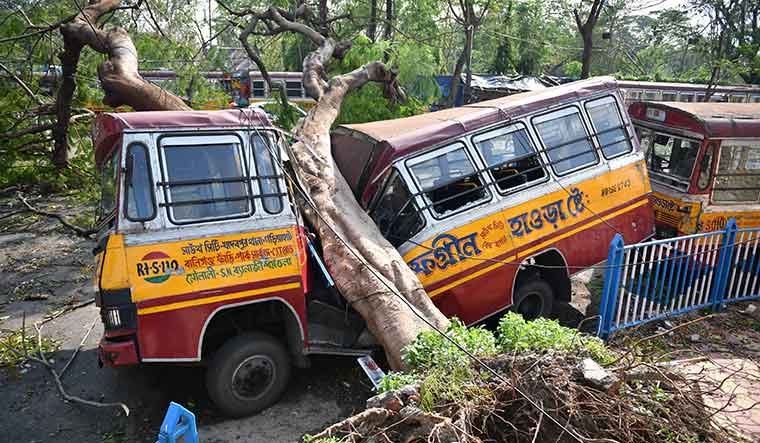 Amphan, however, first hit the green lungs of the state and of neighbouring Bangladesh—the Sundarbans in South 24 Parganas. All 103 islands in the Sundarbans were flooded. When the cyclone made landfall in the Sundarbans and Digha in Purba Medinipur, the wind speed was around 260km/h. The speed dropped as the cyclone pushed inland into North 24 Parganas (over 230km/h), Kolkata, Hooghly and Howrah (all three at around 140km/h). And, it raged on for eight hours and more, crushing everything that stood in its path.

More than 100 old houses in Kolkata were reduced to rubble. Mighty old trees were uprooted (6,000 in Kolkata alone), as were slender electric poles. Five districts of Bengal were in complete darkness for more than five days. Roads were inundated. Bungalows and luxury apartments were damaged. The middle class and the upper middle class, too, took to the streets, but no lathis rained on them.

Their protest, however, made the state blame the Calcutta Electric Supply Corporation (CESC), a private company owned by the RPG-Sanjiv Goenka Group. “CESC is squarely responsible for the electric mess in Kolkata,” said acting mayor and Municipal Affairs Minister Firhad Hakim. “They could have done more than what they did.” A top CESC official, however, said that power substations, too, were damaged, and they were working with limited staff owing to lockdown.

The meteorological department had alerted the state about the cyclone four days in advance. So far, the official death toll is 85 (unofficial: 120). Hospitals are struggling to treat them as they are overburdened with Covid-19 patients. Kolkata, Howrah and Hooghly, too, are emerging as Covid-19 hotspots.

Following criticism, Bengal had upped its testing to 8,000 individuals per day. But only 3,000 tests were done on May 20. And while it touched 5,000 tests on May 24, it was clear that combating the pandemic had taken a back seat. Banerjee’s priority has been to restore water, power, communication lines and transport in six districts. That is when she reached out to Modi. “I want the prime minister to come to our state and see the damage,” she said.

Within half an hour, the state secretariat was informed that Prime Minister Narendra Modi would visit the state on May 22. While the ruling Trinamool Congress said that the visit was at Banerjee’s behest, the BJP said it was based on the briefing by the National Disaster Response Force. “Perhaps lack of communication facilities were the reasons that the state administration received the communication late,” Bengal BJP chief Dilip Ghosh told THE WEEK.

Modi, Banerjee and Governor Jagdeep Dhankhar did an aerial survey of the cyclone-ravaged districts, and were the first to witness the damage as these districts were cut off from the rest of the state. Sources said that Modi was seen making notes on his iPad. Later, he held a review meeting at Basirhat in North 24 Parganas and sought a presentation from the chief secretary. However, Modi, Banerjee and Dhankhar had more information about the situation than the presentation. Modi reportedly told the chief secretary: “Don’t forget the Covid-19 situation while carrying out relief works. Be prepared for a spike in all these areas.” Modi also announced an advance assistance of Rs1,000 crore and said that a Central team would visit Bengal and more aid would be provided.

A day later, Banerjee again visited the Sundarbans with officials. On her return, she was greeted by the protests over non-restoration of services. With the assembly polls just 10 months away, Trinamool leaders are worried about the public unrest as Kolkata, North 24 Parganas and Howrah are the party’s major support bases. While the BJP won 18 seats across the state in the last Lok Sabha polls, it drew a blank in these districts.

Banerjee is aware that this is the toughest period in her 10-year rule, and that the BJP is waiting in the wings to step in. She is, therefore, careful to avoid mistakes she made during the Covid-19 crisis. She did not hide the death toll this time, nor the number of people affected—one crore. She also told the local administration to cooperate with the NDRF, and warned party leaders against interfering in the rationing system. In the early days of the Covid-19 crisis, Trinamool leaders had tried to grab major rationing stores in rural Bengal for their party relief programme. As a result, ration dealers had to cancel ration distribution.

A Trinamool leader said that Banerjee has categorically told party men that rescue operation should be the primary focus, not politics. The BJP, however, is not buying it, with Ghosh asking why she would then attend the videoconference with Congress president Sonia Gandhi and non-BJP chief ministers soon after the cyclone had hit the state.

Banerjee’s critics said that her excessive reliance on bureaucrats instead of ministers would delay the relief work. “Administration must empower officials and public representatives at the lower level,” said B.K. Patra, a retired official who has handled many relief initiatives in Odisha. “People on ground understand the situation better. So, relief should be monitored at the block level, and not by the state secretariat.”

The Central team is expected to visit Bengal soon, and Banerjee has to ensure that she gets maximum aid from Delhi. Banerjee knows that Modi and Home Minister Amit Shah are waiting to wrest the state from her in 2021. Therefore, they cannot be seen as going back on their promise. But the BJP has its own strategy. It will make sure that the people of Bengal know that the Centre had come to their aid in this dark hour.

Politics aside, what remains to be seen is how Covid-19 will be tackled in a post-cyclone Bengal.