Mother of all journeys

Migrant labourers have come to represent the bruised, tear-stained face of India

A nursing mother is seated among rock slabs in a crowded truck at the Andhra Pradesh-Karnataka border as she heads for her home in Chhattisgarh.

Roshan, an out-of-work construction labourer from Begusarai, Bihar, fishes for catfish in a sewage pond in Bengaluru. Workers like him struggled for food after construction ceased everywhere.

Jagannath, a construction labourer from Cuttack, Odisha, walks on a railway track in Chikkaballapur district, Karnataka, to avoid police checkpoints.

Workers of a juice factory in Krishnagiri, Tamil Nadu, take a break from their walk to Chandrapur, Maharashtra, on the outskirts of Bengaluru. They were unable to get seats on the trains to Maharashtra.

An Assamese child, whose parents work at a coffee plantation in Chikkamagaluru, Karnataka, reaches out for food being distributed in Bengaluru.

A migrant worker about to board the Shramik Express to Lucknow from the outskirts of Bengaluru. He was among the lucky few to get a seat.

Workers from Bihar wait for train tickets at a temporary travel desk set up by the police in Bengaluru.

While most of us binge-watched movies or web series from the comfort of our homes during the lockdown, the workers who built those homes were abandoned by their employers, far from their own homes. Not having work or cash, they suffered without food and shelter. But more than these basic needs, they yearned to be with their loved ones. When the government started trains with limited seats for migrants to return to their home states, they flocked to the stations in their thousands and struggled to fill application forms. When the trains left with some, the remaining camped outside police stations day and night, hoping to get the clearance to proceed homeward. 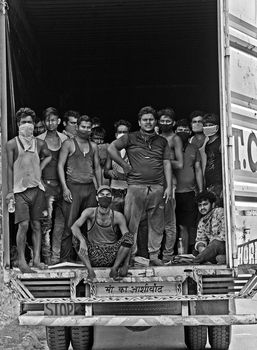 Daily-wage workers en route to Lucknow. They travelled 2,000km in three days in a container.

A few chose the path of self-reliance, taking the long walk home, carrying bags and sacks of utensils and clothes. Children sat on the shoulders of their fathers or clung to the hips of their mothers. Grown-up kids walked barefoot with their parents in the scorching summer sun. Their long journeys are filled with fear—of authorities and of road accidents. The heart-rending scenes moved a few good people to help the migrants on their way. Some gave food and water, a few offered lifts in their vehicles and others donated money.

Youngsters who used to send money home were forced to ask their families for money. They bought bicycles and peddled for thousands of kilometres. Groups of boys walked on train tracks, through forests and farm fields to evade police checkpoints on the highways. “If we all leave the city, it will come to a standstill, that is why they don’t want us to leave,” said a boy who worked as a helper at a construction site. After years in the city, he wants to return home and never come back.