Centre is batting for HCQ, even as WHO’s review of its safety is causing concerns 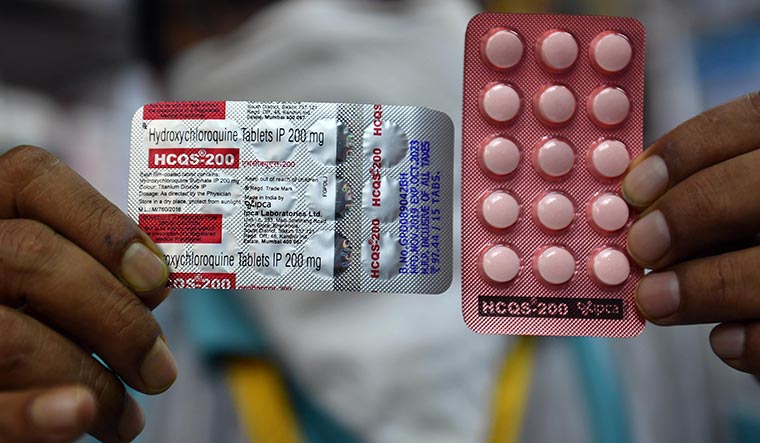 THE HYDROXYCHLOROQUINE (HCQ) story got a major plot twist on May 25. Two months after US president Donald Trump waxed eloquent on the benefits of the antimalarial drug in treating Covid-19, the World Health Organization paused the HCQ arm of its multi-centre, multi-drug randomised clinical trial. (Patients who were getting the drug would complete their course, though.) The pause to review safety data from other trials signals that the hype over HCQ was misplaced, and that there is concern about its safety.

The decision, the WHO said, was taken in light of a large observational study published in The Lancet on May 22. The study showed that among one lakh patients from various countries who took the drug (alone or with an antibiotic), the death rate was higher and an increased frequency of irregular heartbeats was observed. Also, the researchers could not confirm any benefit from the drug in Covid-19 patients.

On the same day, the Indian government issued an advisory to expand the pool of personnel who would receive the drug as a preventive measure against the pandemic. The advisory said that cardiovascular side-effects were rare. The basis on which the Centre’s joint task force took this decision included three studies—a retrospective case control study, an observational study at AIIMS and another investigation from three Central government hospitals—which, as per the advisory, indicated some benefits from taking HCQ for those with high exposure to Covid-19 patients.

The Indian Council of Medical Research (ICMR) has started an observational study for HCQ at five sites—Jodhpur, Patna, Delhi (two hospitals) and Chennai. “About 1,200-1,300 health care workers will be followed up for 12 weeks and we will be comparing the effect of the drug [by observing] those who are taking it and those who are not,” said Dr Suman Kanungo, senior scientist, ICMR-National Institute of Cholera and Enteric Diseases, Kolkata. The results would be out in about two months, said Kanungo, the coordinator of the study.

Though the government is conducting an observational study, experts said that the best option to assess the efficacy and safety of a drug was a randomised controlled trial (RCT). An ICMR epidemiologist said that observational studies can bring in several biases, such as in selecting cases and confounding—the possibility that an observed association is totally or in part because of the effects of differences between the study groups. For instance, in a study on alcohol consumption and risk of coronary heart disease, smoking would be a confounder.

However, Kanungo said that the ICMR study has no selection bias as the health care workers are recruited irrespective of their HCQ status, and potential confounders like use of personnel protective equipment would be taken care of. The WHO trial that was paused, Kanungo said, was a clinical trial for treatment, while the ICMR study was for prevention. He said that an RCT was the best option, but added that if a drug had shown some benefit, it would be unethical to deny it to those in a control group. “In such a scenario, a study of this type (observational) is the best option,” he said.

Given the low quality of evidence that was available for HCQ as a preventive measure, experts said that the government should have gathered more robust evidence before issuing the first advisory. “It might be that HCQ has some [small] protective role, but all evidence so far is in the treatment domain,” said Dr Anant Bhan, Bhopal-based researcher in bioethics and global health. “It would have been ideal to do a smaller RCT in select institutions for prophylaxis (preventive) indication and get reliable data first. Data from an observational study will always be questioned. Why can’t the Centre do a similar review of evidence [like the WHO] in India transparently, and then revise the advisory accordingly? That would be good science.”

Covid-19 is an evolving field, and we do not know which drug is working, said Dr Balram Bhargava, ICMR director general, and secretary, department of health research. Bhargava said that the drug is safe, and the government had recommended it as a preventive measure for health care workers based on in vitro studies that showed antiviral properties and “biological plausibility”. He said that studies also indicated no major side-effects, “except nausea, vomiting and occasional palpitations”. For the nausea, “we recommend that the dose be taken with food,” he added.

Bhargava also referred to the “popularity” of the drug after the US government’s emergency authorisation of its use in March. However, in April, the US Food and Drug Administration had also advised caution on the use of the drug, with or without antibiotics, due to reports of serious heart rhythm problems.

Doctors working in Covid-19 wards said that the news of conflicting evidence on the drug had created confusion and apprehension. Some said it was not worth the risk and decided not to take it, despite the recommendation of superiors. Dr Vijaya Kumar, 70, an independent physician in Delhi, said he had started taking the recommended dose in March after checking in with his peers. “Some of us are of the view that since there are no major risks associated with the drug, based on our clinical experience with patients of rheumatoid arthritis, it is okay to take it,” said Kumar.

Apart from prevention, the HCQ plus azithromycin combination has been allowed as an experimental treatment by the Centre. “Several hospitals are giving Covid-19 patients the combination of HCQ and azithromycin without taking informed consent,” said Malini Aisola, co-convener, All India Drug Action Network. The group has been assisting Covid-19 patients access health services across the country. Aisola said that an analysis of hospital bills for Covid-19 treatment shows how rampant the trend has been. “Recently, a mildly symptomatic patient in a metro city suffering from an immunocompromised condition and mild Covid-19 was compelled to take the combination despite her reservations about the experimental treatment,” said Aisola.

Globally, over 100 clinical trials on HCQ have been registered. Over the next few weeks, as more evidence emerges, the HCQ debate will start to resolve, and the Centre’s enthusiasm for the antimalarial drug shall be put to the test.