Bengal has not seen such kind of devastation in years 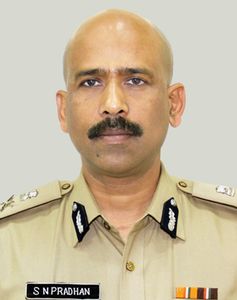 You carried out one of the biggest evacuations in recent times.

Yes, you can say that. Around nine lakh people were evacuated in both West Bengal and Odisha.

Please explain how did you do that because in West Bengal people had to empty islands in the Suderbans.

To be frank, people in Odisha are used to such kind of cyclones as they have been getting it every year. In Bengal, the story was different. Except Bulbul in recent years, they are hardly affected. So we faced some difficulty in Bengal. Also, the cyclone hit Bengal harder and did not do much damage to Odisha.

What were the difficulties you faced in West Bengal?

Initially, people were reluctant to step out. For example, the people on Sagar Island in the Sundarbans wondered how they could leave their houses and belongings. The local administration advised us to let them take their time. But we said if we allowed that they would not be able to pack up. Finally, they did step out. People in rural Bengal were less aware than people in rural Odisha. The awareness was so low that fishermen wanted to go to sea in the morning despite the warning.

But this time, the Indian Meteorological Department had been issuing forecasts at least a week before the cyclone hit.

Yes, that made things easy for us. But poor people in the rural belt are not easily woken up. We carried out massive announcements using our megaphones and other mediums. So, many people finally understood. That also made local police and administration to pitch in as well. The campaigning went on for 48 hours. We told the local administration about the harm this cyclone would bring.

Did you see the resistance only in Bengal or in Odisha as well?

The people and the administration in Odisha are primed for cyclones as they are habituated to them. Bengal has not seen such devastation in years. For instance, Odisha had designated cyclone centres, so it was easy for us to shift people there. In Bengal, relief centres had been made COVID-19 centres. But we were lucky that schools and colleges were closed owing to the lockdown. So we could use them. Also, other buildings were used as temporary relief centres.

How many teams were on ground?

We had around 47 teams ready, of which 36 were used in Bengal (around 60 members in each team). They were divided into four or five sub-teams, and had 300 sophisticated items (like diving and fire-fighting equipment, and boats). Each team had a vehicle. Our protocol does not allow us to use vehicles of state governments or any other agencies.

Did you get enough support from the local administration?

I do not like to create controversies. But I must say that the prime minister set the tone by talking to everyone. [Then] the path was cleared for us to coordinate with the local administration and they fell in line.

How did you activate the local administration because they are not used to cyclones with wind speeds of 250kmph.

We had clearly told them we were not there to make our presence felt. We asked them to use the force [NDRF] to their own benefit. I also told them that the force will remain as long as they want. So in this process, we got help from everyone, including traffic police of Kolkata!

What was the kind of damage you saw?

There is 100 per cent damage in South 24 Parganas, 95 per cent in North 24 Parganas and 85 per cent in Purba Medinipur. Kolkata has never seen such a cyclone in a century. Many old trees were uprooted in and around Kolkata. Electric poles were destroyed and roads damaged. Some old buildings, too, collapsed.

People in Kolkata did not take the cyclone warning seriously.

I was told that this was because Kolkata had never witnessed such a cyclone. During my pre-storm briefing, I maintained that Kolkata was in the path of Amphan and everyone would have to take this cyclone seriously as it was different from past ones.

What should the state learn from this?

People must understand that Kolkata is not too far from the coast. And, it is in a vulnerable location. In future, we need to plan the city accordingly. Because of lack of urban planning we had to face huge problems.

Will it be easy to rebuild the most affected districts?

What we saw was people were very resilient. They have come to repair their own houses, roads and electric poles even if they could. We were surprised to see the resilient attitude of the poor villagers. They were not waiting for the government to come and help them. They have already begun constructing their huts and roads. Of course, we had to face major problems in clearing debris. But people joined us, which helped us a lot. Even people in Kolkata came out and cut trees to bring back normalcy.

How long would the NDRF stay in Bengal to bring back normalcy?

Our job is to clear the debris and re-install electric poles and also clear the roads. Rest would have to be done by the administration. For our jobs, we would have to stay about a week in three badly affected districts. To come back to the stage before the cyclone hit, Bengal will need time.

The Indian Army also joined in operations in Kolkata.

Yes, my officers told me that they had come. It was an administrative decision. But we worked independently on our own.

Were there any casualties among NDRF jawans?

It was a most difficult operation for us as we had to work during COVID-19 time. I had asked officers to arrange enough water, food and juice for the jawans working on the ground. We also had to follow social distancing. But then sometimes it was difficult to follow all such health norms.

Did you follow social distancing while sending people to relief camps and now when they are in relief camps?

Frankly speaking, we could not follow that when we were bringing them to relief camps as they were brought in groups. But inside the camps, we sanitised the places and maintained social distancing. Since January, when COVID-19 broke out in Wuhan, our jawans and officers were trained on how to work under this situation. So special training was given to them. Now once we would withdraw, it is the task of the state administration to follow the norms.