Is Tour of Duty scheme be a boon or bane for the Army? 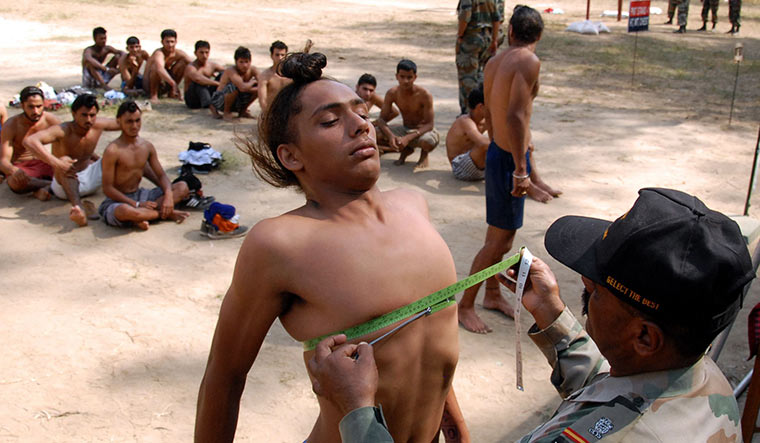 Raring to go: A potential Army recruit gets his chest measured during a fitness test in Punjab | AFP

AKSHAJ PANT, a 20-year-old undergraduate in business administration, so loved Uri: The Surgical Strike that he began dreaming of serving in the Army, at least for a brief period. Now the Army has announced a plan for thousands like Pant who want to don the olive green. Called Tour of Duty (ToD), the plan allows those who do not want to become career soldiers to serve in the force for three years. “If given a chance, I would opt for this,” said Pant. “But I want to pursue a course in management studies from a foreign university.”

Army chief General M.M. Naravane said ToD took shape after officers realised that students were eager to experience the Army life. “When our officers addressed the youth in colleges, we got the feeling that they wanted to experience Army life, but not as a career,” he said.

Under ToD, the Army plans to initially recruit 100 officers and 1,000 jawans after six months of training. It will be “voluntary military service”, unlike the conscription in Israel and South Korea. The army headquarters is targeting cumulative savings of Rs11,000 crore by hiring jawans and officers under the new scheme. “[The savings] could be utilised for the much-needed modernisation of the armed forces,” reads the proposal document.

The headquarters say the cumulative cost of pre-commission training, pay and allowances, and packages and benefits is Rs6.83 crore for an officer under the short service commission (SSC), which mandates 10 to 14 years of service. Such expense for a ToD officer will be lower than Rs85 lakh.

Also, more than half the SSC officers are granted permanent commission. They serve up to 54 years and retire with lifelong benefits. The defence ministry has long been struggling with the hefty pension bill, which is US$6 billion more than Pakistan’s entire defence outlay.

Lt Gen (retd) D.B. Shekatkar, who headed a committee that submitted a report on military reforms in 2015, said ToD would have benefits that goes beyond the armed forces. “Military needs young people, as we are already facing a deficiency of officers. But the bigger advantage will be their post-ToD careers. Those cultured and disciplined youth will improve the quality of governance if they join the civil services after the Army stint,” Shekatkar told THE WEEK.

Industrialist Anand Mahindra said ToD would give recruits an “added advantage” in the workplace they choose after their military stint. “In fact, considering the rigid standards of selection and training in the Indian Army, the Mahindra Group will be happy to consider their candidature,” Mahindra wrote to the Army.

For aspiring recruits, ToD’s pay packet, too, will be attractive. A lieutenant in the Army earns around Rs80,000 per month, while the average salary package for a fresh graduate from Delhi’s prestigious Shri Ram College of Commerce is below Rs50,000 per month. Three years of ToD income will be tax-free, too.

Some experts, however, doubt whether ToD recruits would be effective soldiers. “The Army life is exceedingly tough and officers lead from the front,” said Lt Gen (retd) Vinod Bhatia, who was director general of military operations. “Those joining for three years will not have the physical and moral robustness, and will have a risk aversion, as they will be looking at a career beyond.”